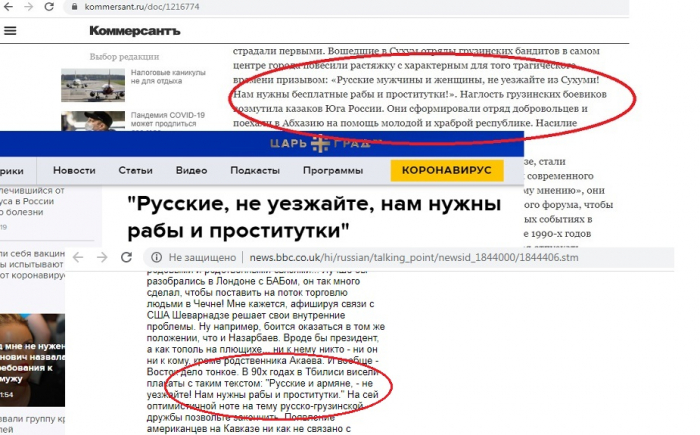 As it is known, one of the most successful provocations of Armenian nationalists was that they were largely able to quarrel with Russia and Georgia, the Russian and Georgian peoples. And for this, they used standard, rather primitive, but working provocations and provocative slogans.

The fact that in the near future these provocations may resume, and in order to continue to manipulate huge Russia for bad by Armenian lobby, some recent events also show.

It became known that the long-standing loyal servant of Armenian nationalists and the curator from the Kremlin of the separatist projects of the “independent” Abkhazia and the so-called “South Ossetia” Vladislav Surkov, apparently intends to combine his efforts with another servant of the Armenian nationalists, director of the TV channel Konstantin Malofeev. For example, this is written in the article “Surkov can create a party with the“ Russian Trump ”(https://strana.ua/news/254914-konstantin-malofeev-i-vladislav-surkov-razdumyvajut-nad-sozdaniem-partii.html)

“Former presidential aide Vladislav Surkov can create a party with the  "Orthodox oligarch ”Konstantin Malofeev, who is considered one of the main ideologists of the annexation of Crimea and the so-called “Russian spring” in southeastern Ukraine in 2014.

According to the Wargonzo Telegram channel, Surkov and Malofeev together attended a conference of the Union of Donbas Volunteers (an organization that unites people who fought on the DPR / LPR side against Ukraine and is led by the former "DPR Prime Minister" Borodai) in the Moscow Region.

“Is it possible that a new political force is being created before our eyes, which the notorious“ Russian Trump ”(Malofeev - Ed.), With the support of intellectual artillery in the form of the Vladislav Surkov. And infantry, led by Borodai and his "volunteer veterans (half of them are acting separatists)," suggests the telegram channel".

So, Surkov and Malofeev are united. Surely “under the patronage” of such sponsors of separatism in the post-Soviet space as Armenian nationalists, with whom Malofeev has had good relations for a long time - after all, when he studied at the Moscow State University, he defended his diploma, he had a supervisor - professor Avakyan.

What provocations these gentlemen can use to achieve their goals show the scandal very well around the recent posting on the Tsargrad TV channel of Vladimir Khomyakov’s material under the provocative heading “Russians, don’t leave, we need slaves and prostitutes” (https://tsargrad.tv/articles/ russkie-ne-uezzhajte-nam-nuzhny-raby-i-prostitutki_240367).

The blogger “magas_dedyakov” writes well about this slogan with the material “The nomadic slogan“ Russians, do not leave ... ”(https://magas-dedyakov.livejournal.com/73869.html) which collected this quote from various materials about the situation of Russians in Azerbaijan, Abkhazia, Georgia, Uzbekistan, Tajikistan, and Kazakhstan. That is, certain forces have been throwing in this false phrase for many years in order to achieve a confrontation between Russians and representatives of other countries of the post-Soviet space.

The lie about this slogan has been repeatedly applied to Georgia. For example, here is the comment of a certain Alex, Russia on the March 1, 2002 news “US Military in Georgia”
(http://news.bbc.co.uk/hi/russian/talking_point/newsid_1844000/1844406.stm):

“In the 1990s, posters hung in Tbilisi with the following text:“ Russians and Armenians - don't leave! We need slaves and prostitutes”.

And regarding Georgia, after August 2008 this phrase was again remembered. Again - obviously from the filing of the Armenian "well-wishers." Here is an excerpt from an online interview with Dmitry Rogozin “On the anniversary of the conflict in South Ossetia, on Russia's relations with Georgia, the USA, NATO and not only” (https://www.kommersant.ru/doc/1216774):

“In all these conflicts, the Russians suffered first. Detachments of Georgian bandits who entered Sukhumi in the very center of the city hung a banner with a call that was characteristic of that tragic time: “Russian men and women, do not leave Sukhumi! We need free slaves and prostitutes!” The impudence of the Georgian militants outraged the Cossacks of southern Russia. They formed a detachment of volunteers and went to Abkhazia to help the young and brave republic. ”

Thus, the Armenian provocateurs attribute the false slogan about the Russian “slaves and prostitutes” to the Georgians, a people who, in general, were much more Orthodox than Mr. Malofeev. If he became Orthodox in the 4th year of Moscow State University, then most Georgians have been brought up in Orthodoxy since childhood and considered Russians fraternal Orthodox people.

Such a slogan, which the Armenian provocateurs composed by the Georgians, could not be by definition. Nevertheless, these provocateurs about the slogan invented by them themselves all the time repeat to the place and out of place.

And after the publication of the article under such a provocative slogan in Malofeyev's “Tsargrad”, one could immediately guess who composed such slogans and attributed them to Georgians and Azerbaijanis. Moreover, in Sukhumi, the “beneficiaries” of hostility between Georgia and Russia are well known.

It is no secret that the battalion named after Baghramyan was actively participating in the war in Abkhazia. Baghramyan and many Armenians seized the houses and apartments of the murdered and expelled Georgians in Sukhumi, Gagra and other cities and villages of Abkhazia. And so that the Russians do not have a question - why Georgian refugees do not return - the answer is ready. Like, "you know, these Georgians were" fascists "! That's how they treated you Russians!” And they cite the above provocative slogan regarding slaves and prostitutes. Many Russian holidaymakers in Abkhazia heard this from the "hospitable" owners, looters, renting them "trophy" Georgian housing.

The use of this provocative slogan “Tsargrad” indicates that Konstantin Malofeev made his channel a mouthpiece of Armenian nationalists. It means that essentially sold to them. And they move Malofeev into the “Russian Trumps”.

Armenian nationalists clearly lay "eggs in different baskets." Until undoubtedly, they are closely patronized by Vladimir Putin; their people, Sergey Lavrov-Katantarov and Mishustin, in fact, determine the entire domestic and foreign policy of Russia. But, apparently, the Armenian lobby also needs a backup option. After all, anything can happen to the same Vladimir Putin. He may lose popularity, in the end, see clearly and try to get rid of Armenian guardianship. For this, Putin can be replaced by pseudo-patriotic “Russian Trump” Malofeev, who will be forced to focus on absolutely unnecessary Russia and hostility to Georgia, Azerbaijan, and other neighbors that are contrary to its interests. And all this will be done in order to solve Armenian geopolitical interests with Russian help. Well, let's say, try to increase the “great Armenia” at the expense of our neighbors.

Indeed, it is not in vain that the very name of Malofeev’s channel “Tsargrad” makes us recall that for centuries Russia tried to incite Turkey to put both its people and its resources in absolutely senseless wars for the possession of Constantinople (“Tsargrad" - King's city - ed.). The Armenian nationalists, of course, need this to fulfill their long-standing dream of dismembering Turkey and seizing the eastern lands. And naturally, Armenian nationalists also dream of capturing almost a large part of Georgia, thus gaining access to the Black Sea, as well as preserving the occupation of Azerbaijani Karabakh.