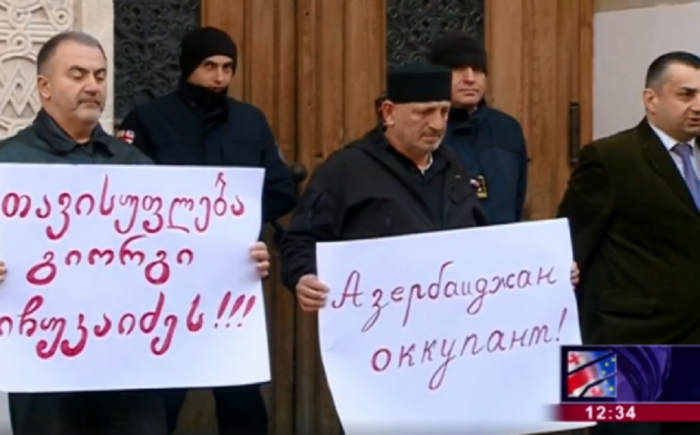 At a time when most political parties in Georgia canceled their actions before the threat of a coronavirus epidemic, there is a group of people that seems to harm Georgia in any circumstances. This is the so-called “David Gareji Rescue Committee”, which clearly performs the public work of the Armenian embassy in Georgia. They held in Tbilisi in front of the Georgian Foreign Ministry a small provocative protest rally with anti-Azerbaijani slogans, among which “Azerbaijan is an occupier” stood out. The provocateurs demanded that the Georgian Foreign Ministry put forward territorial claims against Azerbaijan during the demarcation of the Georgian-Azerbaijani border in the David Gareji region.

“The Zalkaliani department is silent, there is no answer. They did not withdraw the ambassador and did not send a note of protest in Baku. We sent a letter to the ministry with a request to immediately respond to the occupation of Georgia by Azerbaijan,” the founder of the “rescue committee” Nikoloz Mzhavanadze told reporters.

According to the protesters, all those who wish should have free access to the temples of the David Gareji complex, and not depend on the “goodwill” of the Azerbaijani border guards. Surely, in order to repeat the situation when provocateurs entered the Azerbaijani territory together with pilgrims and one of them began to take weapons from the Azerbaijani border guard. Miraculously, victims were avoided.
Recall that after this provocation, Azerbaijan was temporarily forced to block access to its territory in the area of David Gareji, but today, by agreement with the Prime Minister of Georgia, Giorgi Gakharia, the Georgian Orthodox Church allows unhindered worship services in all the monasteries of the complex but regulates the border before demarcation the flow of tourists and pilgrims, in order to prevent the penetration of provocateurs.

The protesters called “Occupant” a country in which, like Georgia, 20% of the territory was occupied by inciting separatist conflicts according to the “Karabakh scenario”, in which Armenian provocateurs and militants (such as the Baghramyan battalion in Abkhazia) participated directly.
Recall that the so-called NKR, organized by Armenian occupiers in the occupied territories of Azerbaijan, recognizes the so-called "independence" of the occupied Georgian territories of Abkhazia, and the so-called "South Ossetia." And Armenia itself at the UN and at all international venues opposes the return of Georgian refugees to the occupied territories of Georgia.
At the same time, the “occupiers”, as Mr. Mzhavanadze says it, is permanently supplying gas to all churches in Georgia, including Armenian ones, through the permanent mission of the Azerbaijani company SOCAR. In general, thanks to gasification provided by the company, all the benefits of civilization come even to the most remote corners of Georgia, from where otherwise the population would simply leave in large numbers. This is one of the benefits that Azerbaijan does on the territory of Georgia and the list that can be continued, however, Azerbaijan fell out of favor with Mzhavanadze.
“Experiencing” about the fate of the temples of the David Gareji complex located on the Azerbaijani territory, where the Azerbaijani side allows the Georgian Orthodox Church to worship without any problems Mzhavanadze for some reason does not mention that Georgian priests do not appear in dozens of Georgian churches and monasteries located in the north of the Republic of Armenia can. Since all these churches were captured by the Armenian side and declared "Armenian". Including the Khujabi monastery, which is located on the territory of Armenia illegally occupied by "moving the border". Which, by the way, in principle, unlike Azerbaijan, turns out to be from the delimitation and demarcation of the border with Georgia, so as not to return the territories captured by the "creeping occupation".

Moreover, the Armenian Apostolic Church officially claims 442 Georgian churches on the territory of Georgia itself, and Armenian Catholics - another 23 churches. A total of 465 temples. (We can provide the list of these documents to Mr. Mzhavanadze). These are only “official” claims.
Unofficially, Armenian nationalists claim almost all Georgian churches, including the Jvari temple in Mtskheta. And there have already been attempts to seize Georgian churches by Armenian extremists, for example, Kumordo Cathedral in Samtskhe-Javakheti in the Akhalkalaki municipality.
However, if you consider that, according to some information, Nikoloz Mzhavanadze himself (the information is verifying) by origin and birth of an Armenian from Javakheti who took the Georgian name, then everything becomes clear. Armenians by origin, but by the will of fate adopted Georgian surnames). This man and his assistants are doing everything in order to transfer turmoil to Georgia, to strike at the Georgian church and the Georgian state. However, these plans really Nikoloz Mzhavanadze almost does not hide his recent interview with the publication "Georgia and the world." It is published under the title “A Hopeless Country Following the Path of Kurdistan” (http://geworld.ge/ru/%d0%b1%d0%b5%d1%81%d0%bf%d0%b5%d1%80%d1%81%d0%bf%d0%b5%d0%ba%d1%82%d0%b8%d0%b2%d0%bd%d0%b0%d1%8f-%d1%81%d1%82%d1%80%d0%b0%d0%bd%d0%b0-%d0%bf%d0%be%d0%b2%d1%82%d0%be%d1%80%d1%8f%d1%8e%d1%89%d0%b0/ ). This, recall, Nikoloz Mzhavanedze speaks so much about Georgia, the interests of which he allegedly "protects."

At the very beginning of this material, the ultimate goal, such as Mzhavanadze, is emphasized in principle, and eloquently: “... Kurds who are scattered across different countries do not have a homeland, so we don’t have it, and our territories will be divided between neighboring states ... "This is what such provocateurs like Mzhavanadze of Georgia want.

Here are excerpts from his interviews that make it possible to judge the “patriotism” of this provocateur:

“Under the current political agenda, we do not even have a theoretical chance to return Abkhazia, return Samachablo and unite the country...

Georgia will collapse very soon as a result of such a policy, and we, unfortunately, will not be able to interfere with this process. Because when you have for many years an open conflict with the superpower that determines the geopolitical agenda in the region, you, of course, are forced to constantly backtrack in terms of security - this is the first; second, from an economic point of view, Russia for Georgia serves as a non-alternative basis, which, even with political will, is not able to replace either Europe or even the United States of America; especially since such a will does not exist. I repeat: very soon, such a policy will lead to the collapse of Georgia, and we will turn into a second Kurdistan - just as Kurds who are scattered across different countries do not have a homeland, so we don’t have it, and our territories will be divided between neighboring states. Of course, I can’t deprive someone of the right to live in illusions and hope that this will never happen, and if it does happen, the “democratic” West will raise alarm for us and bring down the punishing skies on everyone’s heads. However, the reality is actually different: we are the only country in the South Caucasus that, due to the ongoing insults to Russia and the constant struggle against it, is always in danger, and not only from Russia itself but, first of all, of course, Turkey, as well as Armenia, Azerbaijan. ”
The question arises - but you yourself, Mzhavanadze, are doing everything to ensure that Georgia is in danger and will quickly fall apart!

Nikoloz Mzhavanadze quarrels his country with his last neighbors -Turkey and Azerbaijan, who have very good relations with Georgia. With neighbors who literally save Georgia: economically, energetically and with investments.

The obvious conclusion is that such as Mzhavanadze needs precisely the collapse of Georgia. And they bring him closer in every possible way, fulfilling the orders of their Yerevan "employers" who for a long time, without hiding, divide Georgia in their plans, "leading" corridors through its territory to separatist Abkhazia and the Black Sea that they have actually seized.