Margarita Simonyan mocks Russians doomed to impoverishment. Armenian lobby “has a reserve, and it is durable” 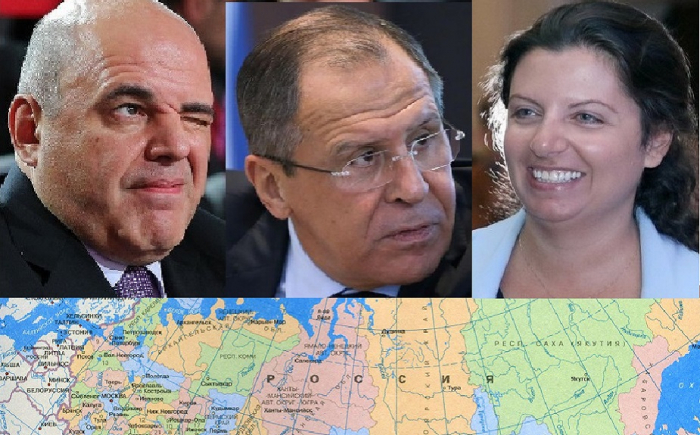 Recall that at a time when the state budget of the Russian Federation received excess profits from the sale of oil and gas, the Armenian lobby that was in power in Russia was spending them on projects completely unnecessary for the Russian people.

No one really thought how much money was spent, for example, to the so-called “recognition” of the so-called “independence” of the separatist formations on the territory of Georgia - Abkhazia and the so-called “South Ossetia” lobbied by the Armenian nationalist Sergey Lavrov (Kalantarov). Billions of dollars, as well as weapons, equipment, goods, technologies, were “donated” irrevocably to Venezuela and Nicaragua. Ordinary citizens of Russia, especially pensioners, large families, residents of the outback, received nothing from this.

50 million dollars, not of their own, but budget ones, Sergey Lavrov (Kalantarov) dumped the authorities of tiny Nauru, almost 5 thousand dollars for each resident of the island territory for recognition of Abkhazia and the so-called "South Ossetia." Even more was paid for the recognition of the separatists of Tuvalu and Vanuatu, which received the money, but safely “threw” the Russian Federation, having withdrawn the recognition.

And how much money from the Russian budget was invested in the insatiable separatist regimes of Sukhumi and Tskhinvali and plundered there (of course, with the help of Armenian businessmen, who, for example, control the entire economy of Abkhazia)? How much was spent on the super-expensive (to ensure the income of Armenian contractors) Olympiad in Sochi?

Therefore, when Margarita Simonyan directly boasts that her fellow tribesmen have a “reserve” in case of a crisis, this can be believed. And not even a supply, but a “storehouse." Armenian bigwigs were pumped up like leeches, parasitizing on the Russian state budget for many years.

But the Armenian lobby is not worried. Indeed, Mikhail Mishustin, who has Armenian roots, is at the premiere of "their man." It is clear that he will not offend his Armenians. Well, Russian citizens, especially the poor and pensioners will have to tighten their belts, the Mishustin government will “save” them.

At the same time, the main Kremlin propagandist Margarita Simonyan did not find anything better than to openly mock Russian citizens on whom the current crisis will hit hardest. The editor-in-chief of RT and Russia Today Margarita Simonyan stated that she had discussed the fall in oil prices and the ruble exchange rate with certain people who "control what is happening in the country." She brought an excerpt from the conversation on social networks:

“Don’t be afraid, we’ll breakthrough. There is a supply, and it is durable,” said Simonyan, one of those whose names, according to her, she cannot name.

The interlocutors also said that cheap oil will not last long and that "everything is going according to plan," since the current fall is "part of this plan."

“Compared to 2008, the current crisis is about nothing,” says Simonyan in a post.

And in principle, Margarita Simonyan's twitter posts on the crisis are openly mocking. Here is one of them:

“The new government has gift after gift, of course.
By February 23rd - coronavirus, by March 8th - oil at 2004 prices.
One hope is that by May 9, according to the tradition of all, we will win”.

I wonder what victory Margarita Simonyan is alluding to? It is known that on May 9, Armenian nationalists celebrate not Victory in the Great Patriotic War (after all, their idol Garegin Nzhde just fought on Hitler's side), but the capture of the Azerbaijani city of Shusha.