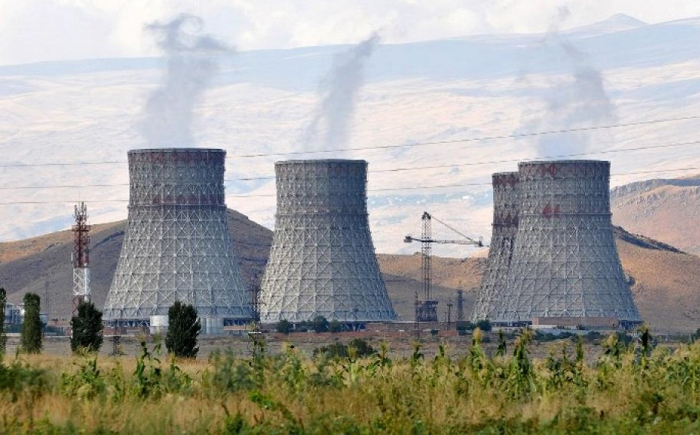 In recent times, the society has been actively discussing the new series “Chernobyl”, dedicated to the accident at the Chernobyl nuclear power plant in the years of the USSR - April 26, 1986. Recall that the consequences of this accident have not been overcome yet. Vast territories in Ukraine, Belarus, and the Russian Federation, where radioactive fallout fell after the accident, remain radioactively contaminated and unsuitable for life and economic activity.

But few people understand that more terrible “Chernobyl” is threatening the countries of the South Caucasus today. The extremely outdated and extremely dangerous Armenian or Metsamor nuclear power plant located in the city of Metsamor in the Republic of Armenia laid a potential nuclear bomb.

However, on November 5, 1995, the 2nd power unit of the Armenian (Metsamor) NPP, which had been in a preserved condition for 6.5 years, was again launched into operation without complying with all safety requirements, is the basis of the energy sector of the Republic of Armenia.

Currently, the Metsamor NPP is becoming more and more dangerous with each day of its operation. The following factors should not be forgotten either: The nuclear power plant was built by the entire Soviet Union. Here worked the best nuclear specialists from all over the USSR.

After the nuclear power plant was stopped in 1989, the best specialists, especially those of non-Armenian ethnic origin, left forever. When the NPPs in independent Armenia were put into operation, there was already a personnel crisis. The shortage of qualified specialists was already extremely acute.

Specialists, many of whom then in 1995 began with a break of 6.5 years, began working again at the Metsamor NPP, by their qualifications, they were significantly inferior to specialists at other NPPs of the former Soviet Union and their main advantage was only in Armenian origin. However, the years go by, the specialists of the “Soviet qualification” are retiring or even living out, and there is no normal training for new personnel at the Metsamor NPP.
Moreover, even those professionals who get at least some skills are trying to leave Metsamor and get a job at a nuclear power plant in the same Russia. Since the wages by international standards at the Armenian nuclear power plant are simply beggarly.

It turns out that in the case of emergency situations (which occur almost all the time at the Metsamor NPP) there are simply not enough competent and highly qualified personnel of employees. Employees of an extremely outdated nuclear power plant may simply lack the knowledge and qualifications to prevent a major accident.

As we remember the consequences of the accident at the Chernobyl nuclear power plant eliminated the entire USSR. Rescue teams from all over the Soviet Union threw out the fire at the 4th unit of the Chernobyl nuclear power plant destroyed by the explosion, helicopters and special equipment were used. But in the modern Republic of Armenia there is no such strength to minimize its consequences in the event of an accident.

The Armenian state spends all its forces on military needs, on the occupation of Azerbaijani Karabakh. It is simply impossible for Armenia to prepare in sufficient quantity rescuers, firefighters and other specialists who will work in an emergency situation.

If an accident occurs at the Metsamor NPP, and if it is assumed that rescuers from neighboring countries - from the same Turkey or Azerbaijan - want to come to Armenia’s help, the same story as the rescuers from Azerbaijan during the Spitak earthquake may repeat. Then, we recall, Armenian nationalists simply shot down a plane with rescuers, who flew from Baku to help the victims of the earthquake Armenians.

The aggressive Armenian nationalism has no rational arguments and even the banal "instinct of self-preservation of the nation" is missing. This nationalism is obsessed with the "myth of genocide." But recall - Metsamor is located in the Ararat valley. There are no natural obstacles between him and the capital of the Republic of Armenia - Yerevan.

Recall that it was the hilly relief saved thousands of lives in the city of Nagasaki during the atomic bombing. The hills and mountains defended the densely populated urban areas and there were fewer casualties than in Hiroshima with its “flat” urban relief.

There is nothing like mountain ranges or ridges of high hills between Metsamor and Yerevan. If we consider that most of the population of Armenia (the same notorious 1.5 million) lives in Yerevan and the Ararat valley, it turns out that the threat of the most genuine nuclear genocide hangs over the Armenian people in the event of a large-scale accident at the Metsamor nuclear power plant. This needs to be thought of, and not about the counting of the mythical victims of the “genocide of 1915”. The descendants of the alleged “victims” of which live today in the Republic of Armenia literally on a “nuclear powder keg”.

And, of course, a possible accident at the Metsamor NPP is extremely dangerous for neighboring countries, primarily for Georgia. In a straight line from Metsamor to the border with Georgia, less than 200 km, to the city of Tbilisi - less than 250 km. For radioactive fallout, this is not a distance, especially when you consider that the transfer of air masses often happens on the territory of Georgia and from the south.

Therefore, for Georgia, the presence of a number of extremely dangerous NPPs should alarm the public. And even more so, plans for the transit of spent nuclear fuel from the Metsamor NPP, which are unknown how they will be monitored and it is not known where these nuclear wastes will be in Georgia.

Meanwhile, the illegal circulation of radioactive substances of “Armenian” origin in the region is already in full swing. In Georgia, the citizens of Armenia who have tried to sell radioactive substances have already been repeatedly detained. Further, given the level of corruption in Armenia and the criminalization of everything related to nuclear energy, these facts may be even more.

But after all, radioactive materials from the Metsamor NPP and the NPP itself can fall into the hands of terrorists. Most recently, terrorists in Sasna Tsrer seized a “police station”. Law enforcement officers were killed. But in the end, all the terrorists after the Armenian revolution of 2018, all the terrorists were free. What prevents these terrorists and the like from seizing the almost guarded nuclear power plant and making the wildest demands?

The public of the South Caucasus countries and, above all, the Republic of Armenia itself, should raise the issue of the immediate decommissioning of the potential Chernobyl - the Metsamor NPP.