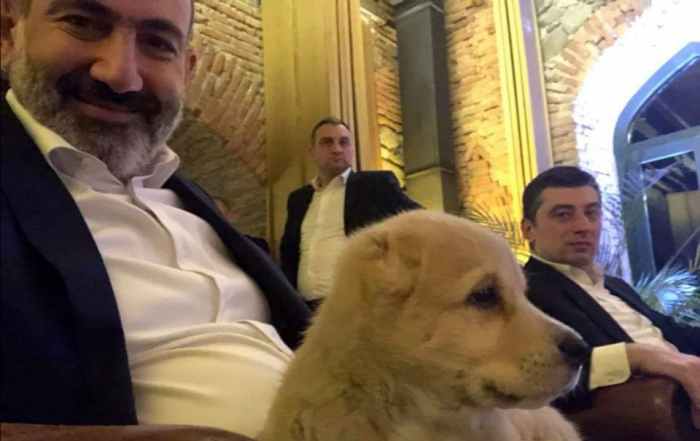 Armenian Prime Minister Nikol Pashinyan paid a visit to Georgia. The very moment of the visit is very eloquent - against the background of aggravation of Russian-Turkish relations on the one hand and the epidemic of coronavirus on the other. Because of this epidemic, Georgia banned the dangerous goods transit through the Armenian territory from Iran (one of the epicenters of the epidemic), which Armenian businessmen profited from reselling.

Pashinyan rushed to Tbilisi not only to unblock Iran’s transit. The Armenian side does not even hide its intention to achieve a “big war” between Russia and Turkey so that in an atmosphere of total chaos, it will finally satisfy its crazy territorial claims at the expense of its neighbors. And at the expense of Georgia - including.

But during a public visit to Tbilisi, Pashinyan did everything to please the Georgians. For example, he defiantly (and clearly hypocritical) honored the memory of Georgian heroes who fell in the struggle for the territorial integrity of the country. Among which, and those who fell at the hands of Armenian militants from the battalion named after Bagrayamna and other formations in Abkhazia.

Pashinyan also artfully “circumvented” the issue of Yerevan’s actual support for separatism on Georgian territory, saying that “the conflicts in our region are very different from each other and completely different from each other.” And in conversations "in public" with Georgian politicians, Pashinyan literally scattered in compliments of Georgia. Here is one of his statements at a meeting with the Speaker of the Georgian Parliament Archil Talakvadze:

“We have reached such an atmosphere in relations between Armenia and Georgia, which, in my opinion, has never been so good. This is expressed in different areas. I was surprised and glad to see that the number of visitors from Georgia to Armenia has increased significantly. We also know that many Armenian citizens have a rest in Georgia, ”said Nikol Pashinyan.

It is necessary to skip that Pashinyan here is clearly disingenuous. It would be considered “good relations” in Yerevan if Georgia opened transit through the occupied territories for Armenia without de-occupation. But the government of Georgy Gakharia refuses to even discuss this issue.

So, with outwardly “beautiful words,” Pashinyan clearly arrived in Tbilisi with not very beautiful sentences. Or rather ultimatums. And what they can be guessed from the lragir resource published close to Nikol Pashinyan under the heading “Nikol Pashinyan warned Georgia: Batumi on the sights” (https://www.lragir.am/ru/2020/03/04/168001/). The article clearly makes a hint that there was direct blackmail of Georgia by the Armenian side so that in the current difficult geopolitical situation, when Georgia clearly supported Turkey’s actions in Syrian Idlib, to drive a wedge into Georgian-Turkish relations. Here is an excerpt from this material:

“The Prime Minister of Armenia, of course, hints that Georgia also has something to worry about regarding the problems with Turkey. It is primarily about Turkish claims to Batumi, which will be the next target of Turkey. Moreover, not after Turkey ends the problems with other neighbors, but precisely because in other directions Turkey can wallow in problems. In this case, Batumi may become an “exit” for Ankara from other problems.

There are many circumstances here, including the question of Nakhichevan, which Iran and Russia can put forward to Turkey. That is why Azerbaijani experts say that the issue of Nakhichevan should be resolved between Azerbaijan and Turkey, that is, without strangers.

The status of Nakhichevan was determined by the Russian-Turkish treaty of 1921. The geopolitical realities and time of Moscow and Ankara are confronting the confrontation about this agreement. Dodge will not succeed. It was with this treaty that Batumi was transferred to Georgia - in exchange for Nakhichevan and Ararat-Surmalu.

From this material, the essence of the blackmail of Pashinyan becomes clear. Either you agree to be our puppets or we arrange an "exchange of Batumi for Nakhichevan." Those. Turkey, so is it, with Russian help, we will give back Georgian Batumi in exchange for "our" Ararat and Nakhichevan. Or maybe we’ll also take Batumi for ourselves since you cannot “protect it from the Turks”.

If this was discussed in the negotiations between Gaharia and Pashinyan, it should be noted that the gift of the Georgian prime minister to the Armenian looks very symbolic.

Recall that in Ukrainian folk traditions, when the bride and her parents want to give a no to the groom and his matchmakers, they are given a pumpkin (in Ukrainian, a watermelon). Hence the expression: “give the watermelon” - i.e. render.

Gaharia gave Pashinyan a dog, or rather a Caucasian shepherd puppy. It hardly means a sign of consent. But the opposite hint is quite possible. Especially when you consider that the Armenian Embassy is located in Tbilisi in an alley, which is popularly called "dog".