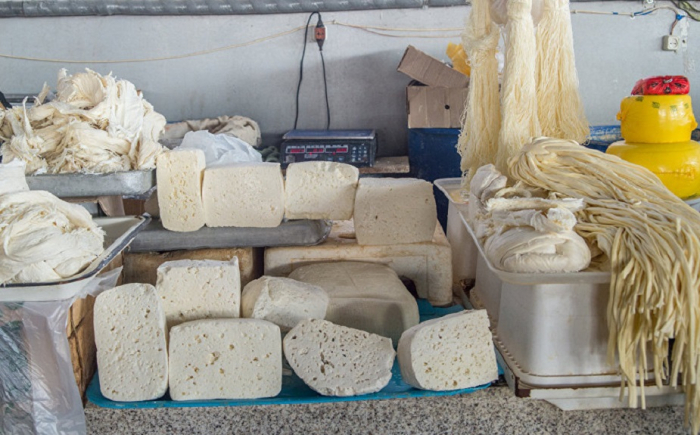 Over 300 thousand Georgians today cannot return to their homes in Abkhazia. Abkhazian separatists and Armenian fighters during the 1992-1993 war captured their houses and apartments, their lands as "trophies". And currently, they are making money on “captured real estate”, renting it out to holidaymakers from Russia who are told tales of how these houses allegedly “sharpened themselves” and at the same time horror stories about “Georgian fascists”.

But the “trophy economy” is characteristic not only of occupied Abkhazia. In the territory of the Republic of Armenia, the indigenous Azerbaijani population was expelled from their land. And today, Armenian immigrants who have settled in the homes of Azerbaijanis are trying to establish their business on virtually “trophy” land.

The territory of the former Amasia region of the Armenian SSR has always been historically populated by Azerbaijani Turks. It was here that the Georgian king David Aghmashenebeli settled the Kypchak Turks whose descendants, together with the Oguz Turks who lived here since ancient times, made up the indigenous population of the Shurageli Sultanate.

In the 18th century, this Azerbaijani state became an ally and a kind of "guardian of the southern borders" of the united Georgian Kartli-Kakheti kingdom. Shurageli Azerbaijanis selflessly fought shoulder to shoulder with the Georgians, including defending Tbilisi during the invasion of Aga-Mahmad-Khan Kajar.

Dark times for Azerbaijanis began in Shurageli after the neighboring Georgian Samtskhe-Javakheti was captured by the Russian Empire and Armenians from Turkey were massively relocated here on the initiative of General Paskevich, expelling the indigenous population - Muslim Georgians. Prior to this, the Erivan Khanate located south of Shurageli was also captured by Paskevich and the massive resettlement of Armenians from Iran and Turkey was organized here. As a result, the Azerbaijanis of Shurageli found themselves “clutched between two zones of a mass settlement of Armenian immigrants.

But in spite of all the attempts of the Armenian nationalists to "squeeze out" the indigenous Azerbaijani population, the Azerbaijanis Shurageli "kept to the last." The Amasia region created here until 1988 was inhabited mainly by Azerbaijanis.

On the eve of the Spitak earthquake, the area was terrified by Armenian nationalists. Dozens of Azerbaijanis were killed by militants; thousands were forced to leave their homes in the midst of a harsh winter.

After the Spitak earthquake, Armenian nationalists deliberately blocked aid to the villages of the Amasia region where Azerbaijanis still remained. After the earthquake, the entire area was "cleared" of Azerbaijanis. Surviving Armenians, including from neighboring Georgian Samtskhe-Javakheti, began to seize houses that survived the earthquake.

Currently, in the fertile mountain meadows of Shurageli, Armenian migrants living in the "appropriated" Azerbaijani villages are trying to "manage". One of these immigrants was especially devoted to a report by the “satellite of Armenia” publication entitled “Let's help your khachapuri: how cheese was exported from the Armenian village to Tbilisi” (https://sputnik-georgia.ru/world/20200219/247766069.html). The name is generally mocking and with claims - they say that even Georgian khachapuri cannot appear without “Armenian cheese”. True, so far, khachapuri is not called "our, Armenian." Well - and thanks for that.

We give the material in full:

“You can already find Armenian cheeses in the markets of Tbilisi. And soon, entrepreneur Samvel Garibyan from the distant village of Ardenis (Shirak region of Armenia, which included the former Amasia region) will offer his goods to Tbilisi supermarkets, Sputnik Armenia reports.

Garibyan has his own agricultural complex. And he began to export cheese to the markets of Tbilisi not so long ago. In his opinion, if you call a reasonable price, then there are always buyers.

“Georgia never artificially closes its market for us. We pass through customs without difficulty. We sell at the market 13 GEL per kilogram (2300-2400 drams). The price includes transportation with customs clearance, but it’s profitable to carry so far,” Garibyan explained.

Finding Armenian cheese in the Tbilisi market is not so difficult: it is supplied here from several enterprises operating in the north of Armenia. Here, both production is developed, and the road is close - from here go to Tbilisi either as much or a little further than to Yerevan.

Garibyan wants to go one step further and negotiate with Tbilisi supermarkets. According to him, in this case, large and stable volumes are needed, but there will be no problems with this.

In Ardenis and other villages around Amasia, winter reigns for six months. Summer is cool, so the grass does not fade, it remains plenty for cattle.
“With what, there is no problem with the feed. I myself had livestock of pedigree cattle. Then I stopped holding it, but now I think I will start it again,” Garibyan says.

To develop his business, the entrepreneur took advantage of the support of the cattle breeding development program, which is carried out by the Armenian organization "Strategic Development Agency", with the support of Austria and Switzerland.

But he acquired the bulk of the equipment himself, and communication with Georgia was a usual thing for him. Only 20 minutes drive from Ardenis to the Georgian border. On the other side - “Javakhk” (Samtskhe-Javakheti region) populated by Armenians. From there comes Garibyan himself.

Before raising the cows again, he wants to understand who to hire. On the terms that he offers, the villagers do not agree to go. Therefore, he invited here labor migrants from South Asia, who can be found in Yerevan (although there are not many of them). But it turned out: they really take a little (they work almost for food), but they need to be monitored every now and again since they do not differ in special zeal. Seeing this, two weeks later Samvel sent them back to Yerevan.

One way or another, local residents work at the pig farm (he has one) and also at the dairy production. Here they give him milk both from Ardenis himself and from several neighboring villages. In his opinion, it’s difficult to earn something and somehow live here, but you can still.”

A very characteristic episode is that an enterprising Armenian migrant hired migrants from Asia to work in the “captured” meadows. Just like in Abkhazia, the Armenian “new masters” who seized Georgian lands as “trophies” are hiring migrants from Uzbekistan and Tajikistan. However, both the Georgians of Abkhazia and the Azerbaijanis Shurageli worked on their land without any migrants. But the “trophies” who drove them out, even on occupied land, do not want to work themselves and seek to acquire powerless mercenaries.

By and large, we can say that the "trophy" land for immigrants remains alien. They consider it as a means of earning, nothing more. This land is waiting for its true owners: Georgians in Abkhazia, Azerbaijanis in Shurageli.