Where the Armenians will self-determine for the second time. In Abkhazia and Sochi? 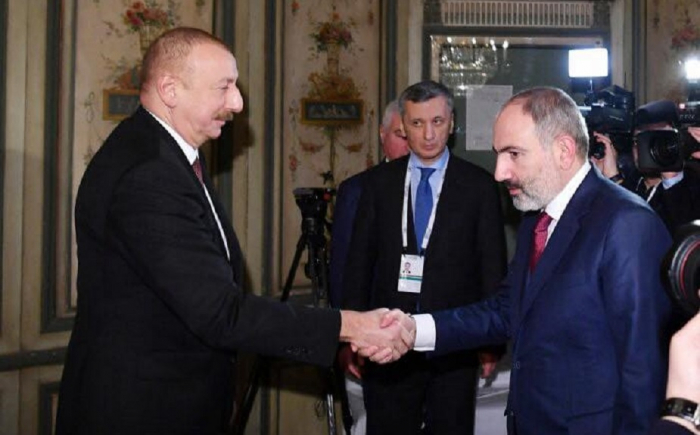 Within the framework of the Munich Security Conference, a meeting was held between the President of Azerbaijan Ilham Aliyev and the Prime Minister of Armenia, Nikol Pashinyan. During the meeting, open debates of the leaders of the two states on the topic “New Trends in the Nagorno-Karabakh Conflict” (moderator of the discussion - Executive Director of the Russian-American Fund Celeste Wallander) took place. The discussion was broadcast live on the event’s website and in fact gave a comprehensive answer to the entire world community which country is the aggressor, occupier, and source of destabilization and separatism in the South Caucasus region.

Azerbaijani President Ilham Aliyev clearly stated that Nagorno-Karabakh is part of Azerbaijan, stressing that the territorial integrity of the country is recognized by the entire international community.

“Azerbaijan did not lose hope that through negotiations it would be possible to return territories. But, if, due to the actions of the Armenian side, the negotiations are disrupted, then retaliatory actions will follow. We are talking with the aggressor, which is Armenia, which seeks to maintain the status quo,” Ilham Aliyev emphasized.

“The Prime Minister of Armenia should not forget that UN Security Council resolutions require the immediate and unconditional withdrawal of Armenian troops from the occupied territories. It was Armenia that occupied 20 percent of the territory of Azerbaijan and conducted ethnic cleansing in the occupied lands against the Azerbaijani civilian population, including the Khojaly genocide. It is the Armenians who destroy our historical heritage on these lands,” the head of Azerbaijan emphasized.

The most interesting thing is that nothing could be objected to the President of Azerbaijan except mythical and based on falsifications “excursions into history”. And Ilham Aliyev convicted Nikol Pashinyan of a gross “juggling” of the facts of very recent history.

Pashinyan tried to get away from the topic, however, Ilham Aliyev reiterated that the Shaumyan district does not belong to Nagorno-Karabakh. Then the Armenian Prime Minister had to admit that Ilham Aliyev was right and apologize.

The Shaumyan district of the Azerbaijan SSR was created in 1930. On February 7, 1991, by the decision of the Supreme Council of the Republic of Azerbaijan, it was abolished, and its territory became part of the Gasym-Ismayilovsky region, later renamed Goranboy. This region has never been part of the Nagorno-Karabakh Autonomous region of Azerbaijan.

The question arises - if such an obvious fact as the non-entry of the Shahumyan region into the Nagorno-Karabakh Autonomous Region from 1930 to 1991, the Pashinyan brazenly lies, then how can he tell the truth about what happened before our era, in the days of Tigran the Great?

Today’s actions of the Armenian side are completely inconsistent with verbal rhetoric about allegedly “striving for peace”.

“Armenia speaks of peace, but how then to explain the murder of an Azerbaijani soldier by a sniper that took place today?”, The President of Azerbaijan asked.

“I came here, to tell the truth. Armenian leaders, including two predecessors of Mr. Pashinyan, have always sought to maintain the status quo. But the truth is that Azerbaijani IDPs must return to their territories, to their homes. This is their inalienable right. More than 80% of the armed forces in the occupied lands are Armenian soldiers. There is no so-called self-defense army, there is no power in Karabakh. Armenia believes that it will be able to keep these territories indefinitely. But this will never happen!”, Ilham Aliyev emphasized.

Ilham Aliyev also noted that Prime Minister Nikol Pashinyan recognized the fact of military occupation, saying that his own son is serving in the armed forces of Azerbaijan in the ranks of the Armenian armed forces.

Azerbaijani President considers settlement of Karabakh conflict possible. “The first phase is the de-occupation of the territories. The second stage is the normalization of relations between Azerbaijan and Armenia. I think both sides are ready, but without the liberation of territories, this will be impossible. We have always said that Azerbaijan is a multinational country, Armenians as a national minority will have the same rights as the national majority,” Ilham Aliyev emphasized.

“The release of part of the occupied territories should happen. Azerbaijani IDPs must return to their lands. This will help establish trust between the parties. And the status of Nagorno-Karabakh will be determined after that,” Ilham Aliyev said, adding that the status issue should be resolved within the framework of the territorial integrity of Azerbaijan.

The fact is that Armenian nationalists already have a “reserve Armenia” in their plans. And they are now feverishly trying to “build” it using their huge wallow on the authorities of the Russian Federation.

This is primarily about separatist Abkhazia, where the Armenians have in fact already become a majority. If we take into account a number of regions of the Russian Krasnodar Territory adjacent to it, primarily Sochi, where the Armenian diaspora also dominates in all areas, we get a “center of Armenian settlement”.

In this “Black Sea resort zone” with a favorable climate, the actual number of Armenians, according to some estimates, already reaches 1 million, i.e. almost as much as in Yerevan. As a result, now there are already 20-30 times more Armenians in Abkhazia, Sochi and other areas of the Krasnodar Territory than the Armenian population left in Nagorno-Karabakh, which was empty during the occupation.

Moreover, there is a real danger that “between the two Armenians” it is planned to “break through the corridor”. Through the remaining unoccupied territory of Georgia. Such plans are extremely dangerous for the stability of the entire region of the South Caucasus. In order to be realized by Armenian nationalists and fanning separatism, they strive to “fix” the results of ethnic cleansing, provoke wars and conflicts in the region.

Obviously, immediate de-occupation of both Karabakh and Abkhazia and the Tskhinvali region is necessary. This is exactly what Armenian nationalists are opposed to, trying to “legitimize” ethnic cleansing and redrawing borders, as well as supporting separatism.