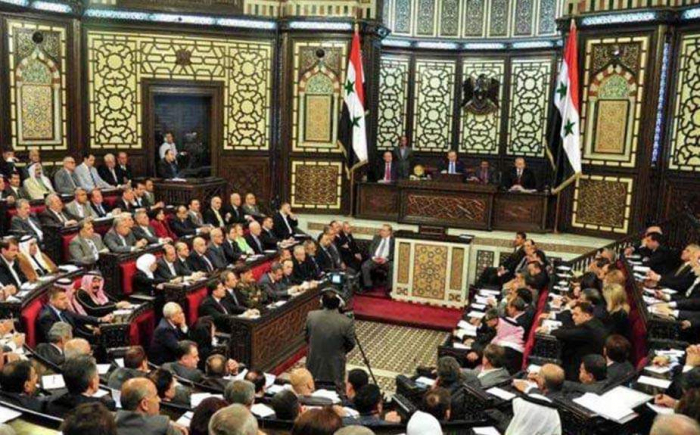 Obedient to the regime of Bashar al-Assad, the so-called "Parliament of Syria" recognized the mythical "genocide of the Armenians in the Ottoman Empire in 1915-1917." This was reported by the Syrian agency SANA.

"At its session, the People’s Assembly condemned and recognized the" genocide "committed by the Ottoman Empire against the Armenian people at the beginning of the 20th century, and also condemned any attempt to deny this crime or distort the historical truth about it," the statement said.

Assad deputies described the so-called "Armenian genocide" as "one of the most brutal crimes against humanity."

T.N. The “Syrian parliament” also “recognized” that “the Armenians, Syrians, Assyrians, and other peoples were victims of ethnic and systematic crimes and “genocide” by the Ottoman Empire, and also condemned attempts to deny the “genocide” of Armenians at the beginning of the 20th century or distort historical truth about the crime.

It is clear that the decision adopted by the Assad regime and its tame parliament is absolutely anti-historic. Especially in light of the mention of a certain "genocide of the Syrians." After all, the Syrians were Arabs, Turkmens, Kurds than in 1915-1918. selflessly fought for their homeland, the Ottoman Empire in the ranks of the Turkish army and died along with the Turks at the hands of Dashnak militants and terrorists.

Syria was just lucky that the Dashnak gangs did not reach it, otherwise, the same Syrian Arabs would experience all the horrors of the atrocities of Armenian nationalists that the Turks, Kurds, Muslim Georgians (Adjarians and Lazy) had to experience.

This is not the first adventurous and absolutely irresponsible decision of the Assad regime, made by him under pressure and for the sake of the Armenian lobby.

Recall that in May 2018, the Syrian Arab Republic in the person of the Bashar al-Assad regime recognized the so-called “independence” of the so-called "South Ossetia" and Abkhazia. Having become essentially the fourth country after Russia, Nicaragua, and Venezuela, which recognizes separatist regimes. "Recognized for money" the so-called "independence" of the separatist territories of Vanuatu and Tuvalu withdrew their confessions.

Even then, informed analysts said that Assad’s “recognition” of the separatists was a consequence of the pressure of the Armenian lobby in Moscow and, first of all, of the Armenian nationalist in the chair of the Russian Foreign Minister Sergei Lavrov (Kalantarov). And the current recognition of the so-called “Armenian genocide” only confirms this.

No one except the Armenian lobby needs this “recognition” of the mythical “genocide”. Moreover, Syria as a state that is extremely important to build good-neighborly relations with Turkey (which, by the way, has hosted over 3.5 million Syrian refugees who fled from the civil war, is more than necessary for it, more than Armenian falsifiers draw "victims of genocide").

However, the Armenian lobby first incited Bashar al-Assad to punitive operations in Idlib. Then, when this led to a clash with the Turkish army providing civilians with security, instead of defusing the situation, it provoked an even greater aggravation.

Bashar al-Assad under pressure recognized the myth of the so-called "Armenian genocide."

Bashar al-Assad has finally and irrevocably shown himself to be a puppet of the Armenian lobby. He essentially “burned bridges” in order to agree with Turkey to restore relations.

And I must say that even from the point of view of the banal preservation of power, this is his big mistake, Bashar al-Assad. Armenian nationalists never spare those of their puppets who do not have Armenian blood. For example, how could the Abkhaz separatist leader Vladislav Ardzinba serve the Armenian interests? For the sake of Armenian interests, he threw his people into a fratricidal massacre, "mowed" the best Abkhazian youth in the war unleashed by him.

And what was the "gratitude" of the Armenian "owners"? They turned Ardzinba into a “vegetable” about the essence, in the last years of his life he was literally in Armenian slavery, and the Armenian “secretary-referrals”, in essence, from surrounding broadcasted “the will of the great Vladislav” to others (more about this in the material “ The Armenian "memoirs" of the separatist Ardzinba or the terrible death in Armenian captivity "https://kavkazplus.com/news.php?id=24902).

The Armenian masters will not spare Bashar al-Assad on occasion. He will be sold or sacrificed at the earliest opportunity.

After recognition of the so-called "Independence" of Abkhazia and the so-called "South Ossetia" Russian political scientist Alexei Malashenko commenting on these actions of Bashar Assad, however, then still denied the puppet of his regime.

“I would not call Assad a puppet. His success in recent years, of course, is largely connected with Russian help, but not only with it. There is Iran, there is a very complex set of relations with Turkey, which, of course, are bad now, but a few years ago it was different. Syria, of course, is not the most influential country in the Middle East, but it’s far from being a puppet. ” - then said Alexei Malashenko.

But today, recognizing the "Armenian genocide", Bashar al-Assad thus finally put himself in the number of puppets. And not even Russia, but the Armenian lobby, and only its narrow part - the one that was entrenched in Moscow.

Perhaps he was prompted by a sharp increase in the position of Armenian nationalists in Russia after their compatriot Mikhail Mishustin became prime minister. But the fact of the matter is that in Russia the situation may change at any time. The Russian people may simply be bored with the dominance of Armenian nationalists in power. And then what? The dependence of the future of Syria on good neighborly relations with Turkey has not been canceled. This dependence is many times stronger than dependence on faraway Russia, which actually carries out its assistance to Syria also by the grace of Turkey through the Turkish Bosporus and Dardanelles.