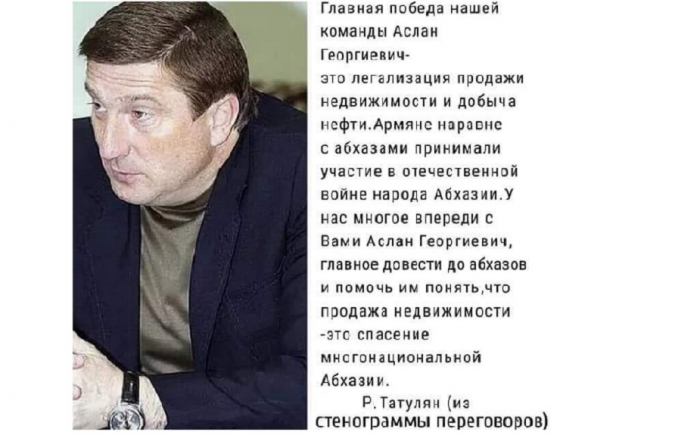 In the days of the colonial empires: the British, French and others, for sure “at the grassroots” level, serious passions boiled in their colonies. Overthrew some tribal leaders, others came to power, etc. But we know almost nothing about it. Since this is absolutely not important, no matter who the leader, the tribe dutifully “hunchbacked” the colonialists and obediently gave them the resources of their land. If it was "naughty" - other tribes pounded him. So that the rebellious could simply disappear. This did not affect the state of affairs, the land really belonged to the colonialists, as well as its wealth.

The recent "Maidan" in separatist Abkhazia occupied by the Russian Federation and the overthrow of the former puppet of the "president" Raud Khadjimba, as well as the upcoming elections in which another puppet will be elected, also have practically no meaning. The “president” of Abkhazia simply cannot become a puppet. Because otherwise, he will not last long in power or banally live. Who doesn’t know if this is not the favorite of the current snap election, Aslan Bzhaniya, who was poisoned banally on the eve of the last regular elections of the separatist “president,” so much so that he did not die, but because of his health, could not take part in the elections. If Bzhaniya is self-willed, then again he will poison, but so that “for sure”.

And the fact that the fate of Abkhazia has already been decided is evidenced by the recent leak of information regarding the negotiations of the opposition separatist “president” candidate Aslan Bzhania and the famous representative of the Armenian diaspora of Sochi, businessman, a native of Abkhazia Ruben Tatulyan. At this meeting, Ruben Tatulyan literally stated the following:

“The main victory of our team, Aslan Georgievich, is the legalization of real estate sales and oil production.” Armenians, along with the Abkhaz, took part in the Patriotic War of the People of Abkhazia. The main thing for you is to convey Aslan Georgievich to the Abkhazians and help them understand that selling real estate is also the salvation of multinational Abkhazia. ”

The words of Ruben Tatulyan for those who know what kind of “leader” is and how many corpses on his conscience actually sound like the final sentence of Abkhazia and the Abkhaz people. Tatulyan puts an ultimatum does not even consider it necessary to hide the threat.

Only by selling real estate to Armenians can Abkhazians temporarily keep Abkhazia “multinational”. Otherwise, it will quickly be “cleansed” of intractable Abkhazians and become mono-national. It is clear that Armenian.

It is an “offer” that cannot be rejected. "

Either sale of real estate or ethnic cleaning. How the militants from the same battalion named after Baghramyan can do this, the Abkhazians themselves, who, together with the “Armenian brothers” participated in the genocide and expulsion of the Georgian population, remember very well.

Recall that the Georgians did not buy real estate. The owners were simply killed and the property taken for free. As "trophies".

Ruben Tatulyan’s hint to the same Aslan Bzhaniya, we think, is clear. Therefore, Tatulyan reminded of the war (and who knows - this is a clear hint of how Georgian real estate passed into the hands of the Armenians and “trophy” -Abkhazians).

Tatulyan directly says to the Abkhazians - save yourself before it is too late. And from his words, it directly follows that the only salvation for the Abkhazians is to sell real estate as soon as possible. Both "trophy" and your own. Naturally at a bargain price.

If not, the Abkhaz are doomed. They will be destroyed much faster, and Abkhazia will become a "multinational" country of one nation. Like, for example, the Republic of Armenia now ...

Ruben Tatulyan on behalf of the Armenian nationalists essentially dictates the conditions. Whoever becomes the “president” of Abkhazia will be ruled by the Armenians, and the issue of buying up real estate by them has already been resolved. This is even more obvious now when the position of the Armenian lobby in Russia occupying Abkhazia has sharply strengthened and the semi-Armenian Mikhail Mishustin has become prime minister. Whom will he listen to the "native puppet" of Bzhania or his fellow tribesman Tatulyan? The answer is obvious.

It is clear that the words of Ruben Tatulyan said by him at a meeting with Aslan Bzhangiy quickly leaked into the social networks and the separatist press. And Tatulyan, in order to “calm the passions”, had to deny them so far. Separatist mass media write about this in particular in the article “Ruben Tatulyan: Do not engage in petty fraud under the guise” (https://apsadgil.info/news/politics/ruben-tatulyan-ne-nado-zanimatsya-melkim-zhulnichestvom-pod-maskoy-/?fbclid=IwAR2LBhE2xESdWifqb0aqB4W2FKzowhIo2wlay-EnIdlDJwW9xL6ZAAgAyg0).

But the most interesting is how Ruben Tatulyan “refuted” his words about Abkhazian real estate. It immediately becomes clear that he generally threatens those of the Abkhaz who “cannot keep their mouth shut” and disseminate information ahead of time.

“I am surprised and do not understand people who specifically aggravate the situation before the election. If you have something to say, then you need to do it on your own behalf, and not engage in a petty scam in the guise. Taking a photo and attributing the text to any content is not difficult. It is clear that this is a fake, you should not pay attention. I had no conversation on this subject with Aslan Georgievich. I do not interfere in political processes, I believe that such issues are not in my competence. There is power, there are political forces of Abkhazia that must decide, ”Ruben Tatulyan said.

Tatulyan also noted that he is giving interviews to reporters for the first time since he does not like publicity.

“This stupidity is even difficult to comment on. Abkhazia is my small homeland and I love it sincerely, I want it to flourish and develop. I have always helped my country, and I will continue to help as I can, disinterestedly, and I will never advertise it to those who need it — they know, and do not seek political dividends for myself, ”said Ruben Tatulyan.

Ruben Tatulyan pointedly called Abkhazia “his”. For those who know this ruthless criminal authority, the hint is obvious. And he is addressed to the Abkhazians, whom he and his fellow tribesmen so far “allow” to live on their land.