“Problems” of Armenian carriers and the tragedy of Georgian refugees. Armenian “transit” pressure on Georgia intensifies 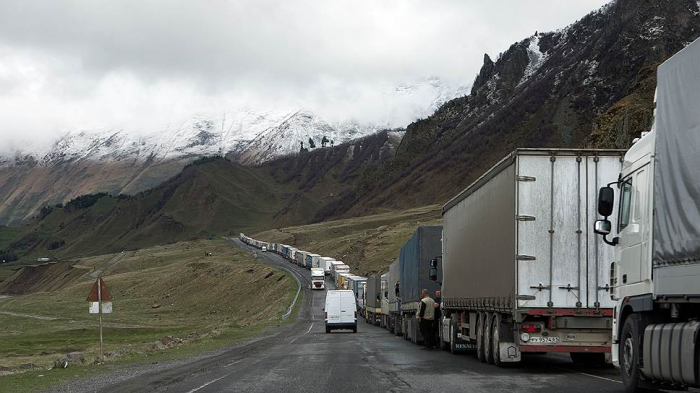 Heavy snowfalls and avalanches on the main highway connecting Georgia and Russia, the Georgian military road became the occasion for a new round of information campaign and political pressure on the Georgian authorities, demanding to open transit for Armenia through the occupied Georgian territories, Abkhazia and the Tskhinvali region.

Naturally, those who write about the transit problems of Armenia and do not want to hear anything about the problems of more than 300 thousand Georgian refugees expelled from these regions. Moreover, they were expelled, not least by the efforts of Armenian nationalists in Abkhazia.

Therefore, the tonality of materials that describe the “terrible problems” of Armenians forced to be content with the only route through Upper Lars connecting Armenia with the outside world is not surprising. This, in particular, is described in the article by Sputnik Armenia: “With such weather, there is no time for coffee, or When they will find an alternative to “Upper Lars”. (https://ru.armeniasputnik.am/society/20200204/21942000/S-takoy-pogodoy-ne-do-kofe-ili-Kogda-naydut-alternativu-Verkhnemu-Larsu.html).

The article begins with “lamentations” about the difficult fate of the Armenian carriers, depending on the vagaries of the weather and the state of the highway through Upper Lars:

“The morning of the driver from Armenia, Ruben, begins not with a cup of coffee, but with a weather forecast. Ruben is engaged in passenger transportation from Yerevan to various cities of Russia. His work directly depends on whether the road to the Upper Lars checkpoint (on the Georgian-Russian border) is open or blocked.

In winter, the Stepantsminda-Lars route (the only active land route from Armenia to Russia) is periodically closed due to bad weather. According to the latest data provided by the Ministry of Emergency Situations of Armenia, the road is closed, and several hundred trucks got stuck at the checkpoint from the Russian side.

"I didn’t leave, I stayed at home, as the path to Lars is closed," Ruben said in an interview with Sputnik Armenia.

The driver knows firsthand what it feels like to be "captured by Lars", and is no longer going to take risks. Once he decided to go on but got stuck on the road. After standing for two days, he had to return”.

All this might seem “terrible” if you do not remember the hundreds of Georgian refugees who died frozen in the passes in Abkhazia when they fled from Sukhumi captured by separatists and Armenian militants. And so far, in many houses and apartments of these refugees, captured by killers and marauders as “trophies”, Armenians live by the warm sea. And even make good money on the tourism business.

The article explicitly states “Armenian carriers will be able to sleep peacefully only in case of the implementation of the Russian-Georgian agreement “On mechanisms of customs administration and basic principles for monitoring goods” from 2011.

“Its implementation will allow, under the monitoring of the Swiss company SGS, launch trade corridors - a path through the Roki Tunnel and the Abkhazian Railway”- Writes Sputnik Armenia.

At the same time, the pressure is also exerted on Georgian politicians. Thus, the Special Representative of the Prime Minister of Georgia to regulate relations with Russia Zurab Abashidze is forced to even “make excuses” to Armenian journalists. In an interview with Sputnik Armenia, he noted that there is some progress on this issue (Armenian transit). This conclusion was reached by Abashidze following the results of the last meeting of the working group with the participation of representatives of Georgia, Russia and the Swiss company SGS, which was held in December 2019.

“The next meeting may take place in March-April this year. Specific organizational and technical issues are discussed. There is some progress, the process continues, "Abashidze said.

He did not rule out that he could discuss this issue at the next meeting with Russian Deputy Foreign Minister Grigory Karasin in Prague, which is scheduled for early March.”

The question immediately needs to be asked: which state does Zurab Abashidze serve and whose interests does he defend in negotiations with Russia? Armenia or Georgia? And whose fate should he care more about - the interests of Armenia, Armenian business and Armenian citizens or Georgian refugees and powerless Georgians Gali district and Akhalgori locked in the "ghetto"?

Recall that with respect to the small Georgian population remaining in the occupied territory, the policy of apartheid continues. They are subjected to humiliation and bullying, they are deprived of basic human rights, they can be arrested, robbed or killed at any time.

For more than two months, the Georgians of the Akhalgori district of the occupied Tskhinvali region, including the seriously ill, were deprived of medical care due to the closure by the separatist authorities of the only checkpoint linking this area with the unoccupied territory of Georgia.

Separate prisoners who came to the aid of patients in the occupied territory of Vazha Gaprindashvili were thrown into prison. But Armenia did not care about his fate at all.

Why should Zurab Abashidze be bothered by the interests of Armenia more than the fate of the people of Georgia subjected to harassment and humiliation in the occupied territories?

Why is he generally engaged in Armenian transit and reporting on “some progress” in this matter to Armenian journalists?

The Ministry of Foreign Affairs of Georgia and Zurab Abashidze should not care at all for a country that supports separatism on the territory of Georgia, accepts separatist politicians from Abkhazia and Samachablo in Yerevan, and who, through the puppet "NKR", has recognized the "independence" of Abkhazia and "South Ossetia."

Until the issue of the territorial integrity of Georgia is resolved, until the interests of all Georgian citizens are satisfied, until the refugees return to their homes in Abkhazia and the Tskhinvali region, there is no and cannot any negotiations on the transit of goods for Armenia, which in fact supports separatism to talk. These actions are contrary to Georgian statehood and the sovereignty of the country.