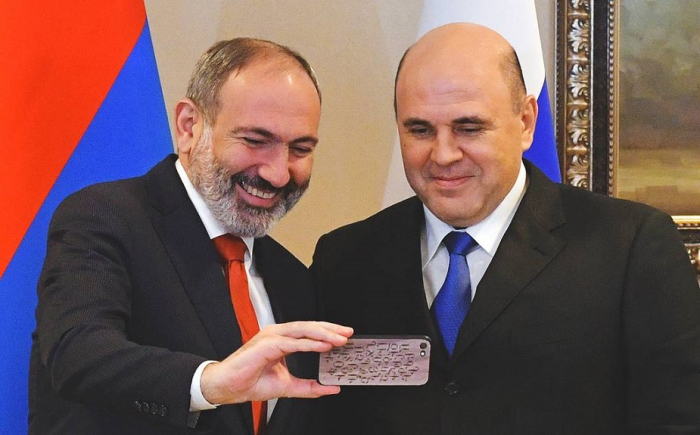 After Mikhail Mishustin, who has Armenian roots, was appointed prime minister of Russia, it became clear that all previous anti-Russian actions to the regime in Yerevan were “forgiven”. Nobody in Russia says that Nikol Pashinyan is an American puppet, that the “Maidan” in Yerevan was prepared by Western NGOs funded by the US State Department and Soros, that the same Nikol Pashinyan “nightmares” Russian business in Armenia and arranges provocations around the Russian military base in Gyumri.

In general, something “along the Armenian line” is now for Mikhail Mishustin Nikol Pashinyan “more important” than Vladimir Putin. After all, Pashinyan is the actual leader of the Armenian state. And for the Armenian nationalists, as you know, the whole world revolves around their Hayastan, and in order to increase the size of their national state, they are ready to sacrifice the interests of other states whose citizens they are.

And the recent first meeting of Mishustin as prime minister and Pashinyan only confirmed the growing influence of the Armenian lobby in Russia.

The Prime Ministers of Russia and Armenia, Mikhail Mishustin and Nikol Pashinyan, held their first bilateral meeting during a meeting of the Eurasian Intergovernmental Council in Kazakhstani Almaty. And immediately it became clear that Mishustin and Pashinyan are “soul mates”. In the literal sense, they perfectly understand their common Armenian origin and the interests of Armenian nationalists.

The meeting of the heads of government of Armenia and Russia began in a very unconventional and somewhat “familiar manner”. Pashinyan invited Mishustin to take a picture and invited him to the flags. The prime ministers shook hands and posed like that for a few seconds, then the head of the Russian government proposed a slightly different “disposition” - standing next to him against the background of flags.

“Next? Let's go,” Pashinyan agreed and immediately asked: “Or maybe a selfie?”

Selfies made on the phone the premiere of Armenia, a well-known lover of this photo genre.

"And in Armenian, how will the" selfie "be?" - asked Mishustin.

"Selfie?" Yes, this is an Armenian word, "Pashinyan answered jokingly.

As the Russians say, “in every joke there is only a fraction of the joke.” Both Pashinyan and Mishustin are aware of the efforts of the Aryan falsifiers to appropriate another's.

Azerbaijani lavash, dolma and Kochari dance, Georgian churchkhela, sulguni, khachapuri and much more from the cultural heritage of neighboring peoples have already been declared "Armenian". So the joke about the fact that “selfie” is the “Armenian word” means a hint that efforts to appropriate someone else will continue.

The positive atmosphere during the meeting of the “Two Armenian Prime Ministers” continued further. Mishustin noted that the new composition of the Russian government aims to continue relations with Armenia, including through the intergovernmental commission, headed by the Russian Minister of Transport Evgeni Dietrich.

“Russia is Armenia’s leading economic partner, it accounts for over 26% of the foreign trade of the Transcaucasian republic. About 2.2 thousand enterprises with Russian capital operate in Armenia - this is about a third of all joint ventures in the republic, ”Mishustin recalled.

“In 2018, our trade turnover increased by 11% to about two billion dollars. In January-November, growth continued, amounting to 17.6%. It is necessary to consolidate these achievements and look for new areas for cooperation, ”the head of the Russian government emphasized.

Mikhail Mishustin emphasized that the Russian-Armenian intergovernmental commission is not chaired by the Minister of Transport of the Russian Federation. For those who know the main problems of Armenia, the actual blockade, which prevents it from increasing trade with Russia itself, the hint is more than transparent.

The Armenian lobby on the part of Russia and the authorities in Yerevan, for their part, will “punch through” transit through the territory of Georgia. More precisely, through the occupied Georgian territories of the Tskhinvali region and Abkhazia. And this despite the fact that in the last ethnic Armenians, in fact, have already become the majority and "masters of the situation."

It will be difficult to resist the new challenges of Georgia from the “two governments led by the Armenians”. After all, the regime in Yerevan is considered "as if pro-Western." And now, at the same time, through the Prime Minister Mishustin and Russian Foreign Minister Sergei Lavrov (Kalantarov), the Russian government is “running errands” with Armenian nationalists. And the Minister of Transport of huge Russia, the "Armenian authorities", apparently, was puzzled by the issue of Armenian transit. As if the Minister of Transport of the world's largest country has no other problems. And “at the forefront of resolving Armenian transit issues”, unfortunately, is Georgia, torn apart by separatism (with the participation of the same Armenian nationalists).