What Abkhazia has turned into without Georgia - and what does Crimea have to do with it? 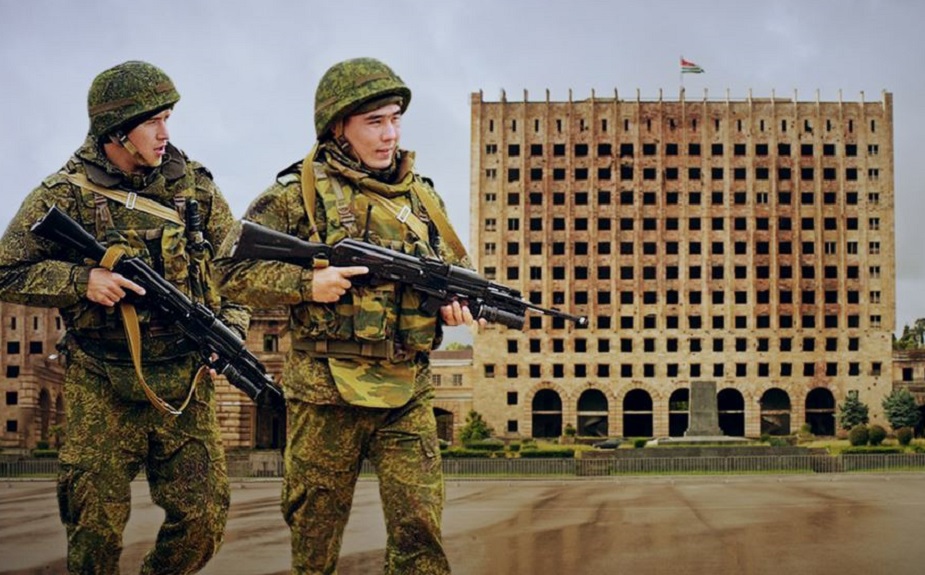 Among reviews of people visiting the occupied Abkhazia there is already a pattern - they write about the same thing: destruction, poverty, terrible service, difficulties of survival of ordinary people. Unless, of course, it is a paid Kremlin propagandist, who also cannot but touch negatively, but writes it off as "consequences of the Georgian aggression". True, at the same time "forgetting" that most of the population of Abkhazia were robbed, killed and expelled by "winners" just because they are Georgians.

It is also often not mentioned that many of the currently distressed residents of Abkhazia live in "trofen" houses and apartments of houses of those Georgians that were killed or expelled. That is, to a large extent, these residents of "independent Abkhazia" are largely to blame themselves - no one has ever brought happiness to anyone else. But few people see positive things in the separatist Abkhazia.

Ukrainian journalists Aleksandra Shevchenko and Inna Anitova, who visited the occupied Abkhazia and published the article "What Abkhazia has turned into without Georgia - and what does Crimea have to do with it" published on the site "Crimea. Realia" (https://ru.krymr.com/a/abhazia-i-krym-zhizn-pod-rossiei/30397818.html ).

We bring it in full:

"The Black Sea splashes here, and pebble beaches are similar to the coast of the Southern coast of the Crimea. Here the sun shines, fragrant fruits grow, ripening wine from local grape varieties. But guests are greeted by a broken railway station building, the territory of which was seized by bushes and grass, an abandoned cinema, rusty emblem of the Russian "Aeroflot" over the airlines, which 30 years ago lined up lines for tickets.

It's 15 kilometers to the border with Russia. This is Gagra - a resort in the self-proclaimed republic of Abkhazia. Soviet elite - from artists to party bosses - used to rest in this subtropical town. The resort was considered prestigious. After the Russian-Georgian war in 2008, Russia recognized the "independence" of the separatist regions of Georgia Abkhazia and South Ossetia. Tbilisi and Western countries consider these territories occupied regions of Georgia.

Today less than 250 thousand people permanently live in the whole of Abkhazia. How do local residents earn and what is left of the former luxury of the resort? What do tourists appreciate, what kind of purchases do people from Russia come here for? "There is a feijoa - we add in half with kiwi and lemon - very tasty grated with sugar. We soak the tangerines before cooking them so that the crust doesn't get bitter", Svetlana, a seller, advertises her product.

Svetlana, a Russian by birth, has been trading at Gagra bazaar for 25 years. Her clients are tourists who choose Abkhazia, because it is cheap here. "Vacationers, in my opinion, come from the entire Soviet Union, from all over the space. Those who come once, and the second, and the third and fourth. Some come seven times each. And everybody is happy, sometimes we have a difference, but always good. They come from Ukraine, they come from the North, they come from Moscow, they come from St. Petersburg", says the seller.

At the beach in Gagra there are advertisements for tours from the occupied Donbass to Abkhazia on the poles. Tourists with numbers "DNR" can be met on the highway. Visitors from Donetsk Victoria admires views on the observation deck in the mountains, a woman is on holiday for the first time in Abkhazia, her husband is engaged in transportation.

"We don't have a lot of work in Donetsk - everyone is involved in transportation. The one who can make money on what he does. Since the wealth we have is not very large, here we have prices for housing, it is cheaper than in the Crimea. We know, because every year we go to the Crimea, and it's much more expensive there," notes Victoria.

Products in Abkhazia and Donbass cost almost the same, but prices are higher in the Crimea, she says. Next to the beach in Gagra there is a whole street of dining rooms, most tourists eat here. Half of the rice, hodgepodge in Caucasian, compote, meat in French, pasta, cheese cakes with sour cream and coffee - such a lunch will cost 560 rubles (240 UAH - KR).

In addition to prices, the guest from Donetsk liked the sea here: clean water and half-empty beaches.

"I do not know what Abkhazia was like before the war. Of course, I would like to make more investments here for tourists, perhaps, but not to say that everything is so pathetic and bad. But development is a little slower, of course," - says the tourist.

Local fishermen say that the residents of Donbass go not only to the beach. There are health resorts for DPR militants.

"They are our brothers, they come here and get medical treatment too. They come to us as disabled people, I am also a war veteran, a hero of Abkhazia. They come to us, they are treated for free as they should. We should, as a brother to his brother, help each other" - said a local resident Guram.

Both during the day and at night on the observation deck, next to the sign: "Do not throw garbage! The sniper is working", several men are on duty. They share a business - a giant swing over a cliff. Ride, shoot video or photo - prices from 100 to 500 rubles (40 to 200 UAH - KR).

To provide a service to a holidaymaker is one of the few legal ways to make money in Abkhazia. And it is mainly in the hands of Abkhazians.

Most tourists in Abkhazia are from Russia, they are not rich, says the editor of the project of Radio Liberty Ekho Kavkaza.

"I would not say that this is a rich tourist. It is a tourist who is not very wealthy, who has been attracted by low prices in recent years, mainly. But there is a traditional Abkhazian tourist - these are people who have been going there since Soviet times, for whom these resorts are so nostalgic, "- says Demis Polandov.

"This is not Russian territory."

A record year for Abkhazia was 2015, when the region with a population of 250 thousand was visited by 1.5 million people, according to the authorities. That is, according to the Ministry of Tourism of the unrecognized republic, there were on average six holidaymakers per resident. Russian guests brought money to Abkhazians, and after the war Russia began subsidizing Abkhazia.

Independent sources do not provide data on the number of tourists in this region.

"The centre looks much more presentable than, for example, ten years ago. We can see infusions, we can see Russian money. New hotels are appearing, and good hotels. There are ATMs, now you can come, you can buy a normal card, you will have a good Internet - better than in Sochi. That is, there are some changes, of course, but visually war is still visible there," says Demis Polandov, editor of the project "Ekho Kavkaza" (Radio Liberty).

Already in 2017, according to local authorities, only 800 thousand tourists came here. One of the reasons for the decrease in the number of tourists was the crime situation. But in 2019 the flow resumed. According to officials, Abkhazia was visited by more than one million tourists. According to their data, this figure is growing, however, half of people come from resorts of the Krasnodar region only for one day: either on a tour or in Duty-Free for cigarettes and alcohol. Such shopping tours are often shot by bloggers.

In summer, the tourist guide Karina Tuzhba earns his living, and in off-season the woman teaches history at school. She has four children and used to take tangerines to Russia for sale. Lately, she says she lives easier.

"In 2008, after Russia recognized Abkhazia, a tourist boom began. When even today the question is asked: why is there a lot of destruction around? I am always trying to convey to people, to explain that we were under blockade for ten years after the war, in addition, until 2008 - until the recognition of Abkhazia - we were afraid to live and think about tomorrow" - says the Abkhazian guide Karina Tuzhba.

Most of all Karina is saddened when tourists from Russia behave in Abkhazia as hosts.

According to Karina, many tourists are "not informed that this is not the territory of Russia.”

"It happens that tourists say: "Thanks to us you survived, you live". And, you know, somehow they say it with such arrogance. It's getting very upsetting", complains Karina.

But here is another family of Abkhazians - they live in the mountains (district of Tkvarcheli), near the Russian military base, and a tourist does not bring money here.

"We always have bread and salt, no matter who comes from Russia, from Georgia - it does not matter. We will always accept people", says Manana Argun, head of the family.

According to Manana, her family, including her son and daughter-in-law and three granddaughters, live on her Russian pension, which is 10 thousand rubles (about 3,900 UAH - KR). At the same time, Manana calls Russian President Vladimir Putin "our Russian president" and states that he "should be thanked for feeding her family”.

Sister-in-law of Manana, Milana claims that the majority of the population of Abkhazia will not be against joining the region to Russia.

The Argun family has a house in the mountains, a truck, a passenger car, cattle, poultry, but there is not enough money - unemployment in the mountainous areas. Manana does not pay for the utility company. She takes cows on credit, gives most of her pension for them.

"How can I go to the store if I don't have any money?! How? I make debts. My pension isn't enough, I'm borrowing. Then I wait for the next pension - I give the debt and take the goods again, again I do the debt. This is how we live," says Manana Argun.

Milana is worried about the fate of three daughters: even with their education it will be difficult for them to find a job here.

"Everyone is trying, of course, to go to Russia, who has the opportunity, who will buy an apartment or a residence permit. There's nothing to do here. With higher education, with diplomas, people sit at home", - an outraged local resident with Ukrainian roots Milan Argun. But Manana's family head has a plan to earn money. The woman wants to open a kiosk near the Russian military base. According to her, the military will stand there for another 50 years, she plans to cook them food for sale". End of story.

It is clear that journalists from Ukraine are more interested in comparison of occupied Georgian Abkhazia with annexed Crimea and separatist DPR and LPR in Donbass. And even from this information we can conclude that the separatist Abkhazia is not only a Georgian problem. It is a breeding ground of separatism, disregard for international law and illegal border crossing. And it will be so until the jurisdiction of Georgia is restored here and Georgian refugees return here.