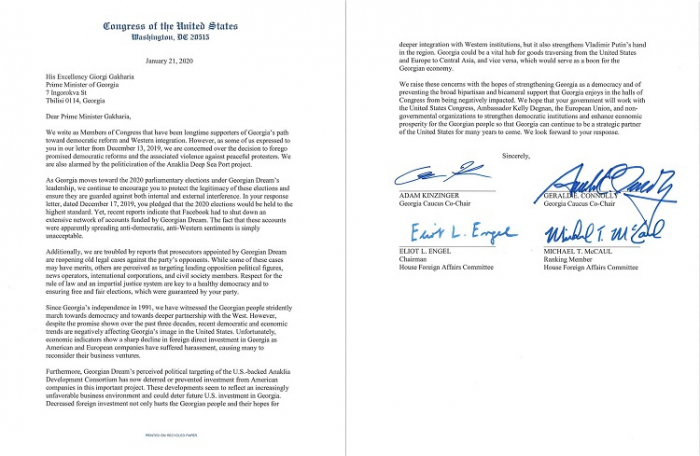 The Government of Georgia has released a letter that four United States Congressmen have sent to Prime Minister Giorgi Gakharia.

Congressmen Adam Kinzinger, Gerald Connoly, Eliot Engel, and Michael McCaul wrote on January 21 that they were concerned "over the decision to forego promised democratic reforms and the associated violence against peaceful protesters” in Georgia.

As Georgia moves toward the 2020 parliamentary elections under Georgian Dream’s leadership, we continue to encourage you to protect the legitimacy of these elections and ensure they are guarded against both internal and external interference”, the Congressmen wrote.

The four Congressmen felt “troubled” by reports that prosecutors appointed by the ruling party are “reopening old legal cases against the party’s opponents” as well.

They said, “while some of these cases may have merits, others are perceived as targeting leading opposition political figures, news operators, international corporations, and civil society members”.

Respect for the rule of law and an impartial justice system are key to a healthy democracy and to ensuring free and fair elections, which were guaranteed by your party”, the Congressmen wrote.

Kinzinger, Connoly, Engel and McCaul further spoke on “sharp decline in foreign direct investment” in Georgia as American and European companies “have suffered harassment, causing many to reconsider their business ventures”.

In the letter to PM Gakharia, the Congressmen also said that they were “alarmed by the politicization” of the Anaklia Deep Sea Project.

They said the Georgian Dream’s “perceived political targeting” of the US-backed Anaklia Development Consortium “has now deterred or prevented” investment from American companies in this “important project”.

The Congressmen noted as well that these developments “seem to reflect an increasingly unfavorable business environment and could deter” future US investment in Georgia.

Decreased foreign investment not only hurts the Georgian people and their hopes for deeper integration with Western institutions, but it also strengthens [Russian President] Vladimir Putin’s hand in the region”, they noted in the letter to the Georgian PM.

Stressing that Georgia could be “a vital hub for goods” traversing from the US and Europe to Central Asia and vice versa, the Congressmen said the port would “serve as a boon for the Georgian economy”.

We raise these concerns with the hopes of strengthening Georgia as a democracy and of preventing the broad bipartisan and bicameral support that Georgia enjoys in the halls of Congress from being negatively impacted”, the letter concludes.

The US Congressmen also hoped that the Government of Georgia will work with the US Congress, new Ambassador Kelly Degnan, the European Union, and non-governmental organizations “to strengthen democratic institutions and enhance economic prosperity” for Georgian people.

In that way, the Congressmen said, the country “can continue to be a strategic partner” of the US “for many years to come”.