The bloody secrets of Etchmiadzin - why are they “revealed”? 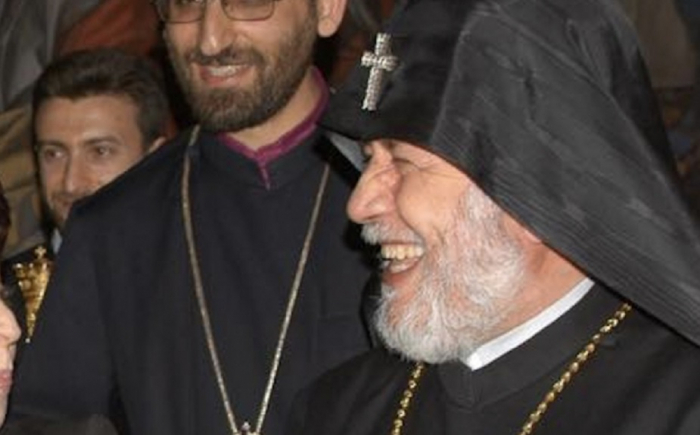 “Caucasus Plus” has already written that a serious struggle has unfolded over the control of the Armenian Apostolic Church (AAC), which includes the main geopolitical players and the Vatican. In particular, some details of the struggle for the AAC are highlighted in the article “Etchmiadzin passes to new "owners" and will be used against Russia and Georgia” (http://en.kavkazplus.com/news.php?id=2581#.XigtC8gzbIU0).

Apparently, control over the religious structure that unites most of the world of Armenians is now very important. As a result of the struggle for this control, not only “dirty”, but also “bloody linen” begin to get into the white light.

So recently a material was published on the site armenia.im: “Sensational first-hand details: how Vazgen Sargsyan forcibly imposed the church of Garegin B and was killed on the same day. Archbishop Tiran broke the silence ”(https://armenia.im/news/2020-1-15-2).

Indeed, a long silence on such a seemingly “flashy coincidence” that the current Catholicos Garegin II was elected on the same day as a bloody terrorist act in the Armenian parliament on October 27, 1999 (the entrance of which killed Karen Demirchyan and Prime Minister Vazgen Sargsyan, and after which the entire power of Armenia was concentrated by the “Karabakh clan” led by Robert Kocharyan) seems strange. Especially when you consider that the same persons had a hand in both the terrorist attack and the election of the Catholicos.

At that moment, when terrorists in Yerevan seized parliament in the center of the Armenian Apostolic Church, St. Etchmiadzin was the election of the Catholicos. He was elected at that time quite young (48-year-old) head of the Ararat diocese, Archbishop Garegin Nersesyan. He won the first round of voting, by more than 100 votes ahead of his main rival - locum tenens of the throne Nerses Popozalyan.

However, the support of Garegin to those killed on the day of the election of the Catholicos, Vazgen Sargsyan, raises questions. Perhaps, initially, he supported Garegin in exactly the same way as he was irreconcilable with the idea of starting the re-occupation of 7 regions of Azerbaijani Karabakh captured by the Armenian army outside the former NKAR.

But, apparently under the wobble of the “arguments” of certain geopolitical players, Vazgen Sargsyan changed his mind on Karabakh. Perhaps, before his death, he also changed his vision regarding the future Catholicos of the AAC. But what it was we will never know.

One way or another, but it turns out that on October 27, 1999, for the Armenians the main issues - the Karabakh conflict and the election of the new Catholicos should have been resolved. And the attack on that day in the parliament in Armenia introduced certain “corrections” to them.

Moreover, the fate of the main rival Garegin II in the election of Catholicos Nerses Popozolyan is interesting.

Especially since, apparently, he initially had big chances for election. It is no secret that in many church organizations the locum tenens is regarded as the “heir”.

So, about the fate of Nerses Popozolyan in Echmiadzin, they try not to “spread” once again. Still, he actually became the victim of contract murder.
On February 18, 2009, Nerses Popozolyan was seriously injured in a robbery. The attack occurred in his home of the Mother See of Holy Etchmiadzin (that is, in a place that is completely controlled by the Armenian special services and where it is easy to calculate “random visitors”). In a coma, Nerses Popozolyan was hospitalized at the Nairi Medical Center. The archbishop, until his death, remained under the supervision of the Medical Center, where he died on June 27, 2009, without regaining consciousness. The customers of the crime, of course, could not be found.

It was a contracted political murder of a man who could become an Armenian Catholicos, and who probably knew very well who had prevented him from doing so.

The biography of Nerses Popozolyan leaves no doubt that if elected, the new Catholicos would hardly have been so “pro-Russian” as Garegin II. If Garegin was born in the village of Voskeat of the Echmiadzin district of the Armenian SSR and most of his life was connected with the same Armenian SSR, then Nerses Popozolyan is “a completely different field of berry”.
Nerses Popozolyan was born in 1937 in the Turkish province of Hatay, then occupied by the French, on the eve of its de-occupation and accession to Turkey. In 1939, his family moved to Beirut, where he received his primary education at the Armenian Nubaryan College, then at the Antilias Armenian Seminary and at Beirut Central High School. And only in 1957 did his family move to the Armenian SSR.

But further in the biography of Nerses Popozolyan, a lot is connected with the West: So from 1963 to 1965, he studied in England, in Yorkshire, at the Department of Theology at the College of the Resurrection of Christ. At the same time, he took part in the summer courses of English culture and literature at Cambridge University. Upon returning from England, until 1969 he worked as dean of the Theological Seminary of Gevorgyan of the Holy Etchmiadzin. From 1969 to 1970, Nerses Popozolyan studied at the Bosset Ecumenical Institute in Geneva, and from 1969 to 1972 he served as the spiritual shepherd of the Armenian community in Switzerland.

It is clear that the “Karabakh clan” and Russia relied on Garegin, and not on Nerses. And in 1999 they won. But after the Maidan of 2018 and the coming to power in Yerevan, Nikol Pashinyan, the situation changed. The Karabakh clan is defeated, the “powerful” Robert Kocharyan is dragged through the courts. And apparently, certain forces want a question with the influence on the AAC urgently “replay”.