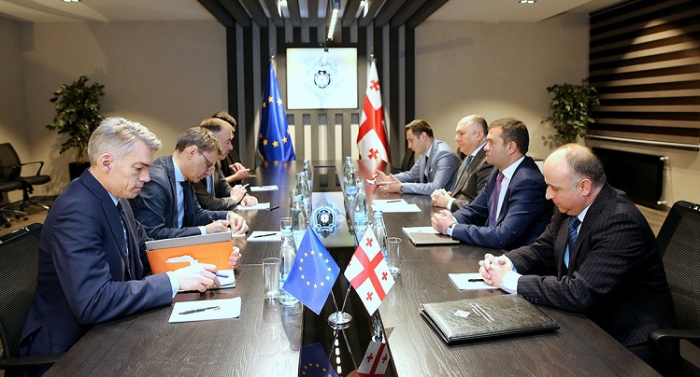 Head of the Georgian State Security Service Grigol Liluashvili has met with EU Special Representative for the South Caucasus, the co-chair of Geneva International Discussions Toivo Klaar earlier today, following the recent erection of new installations and appearance of markings on trees by Russian-controlled occupation forces in Tbilisi-controlled Gugitiantkari and Chorchana villages.

The current situation in the occupied territories and along the occupation line, as well as existing challenges in the security field, have been discussed during the meeting. Attention was focused on the role of the EU as the co-chair of the Geneva International Discussions and the importance of unlimited access to the European Union Monitoring Mission in the occupied territories,” the Georgian State Security Service reports.

The agency stated yesterday that the occupation forces erected illegal installations in the village of Gugutiantkari, Gori Municipality, in central Georgia, close to the Russian-occupied Tskhinvali region.

The agency also responded to the statement of the anti-occupation movement Strength is in Unity that the occupation forces have made new markings on the trees in the Chorchana forest, Khashuri municipality, 240 meters from the occupation line, on Tbilisi controlled territory.

The Security Service said the central government will respond appropriately to any possible sign of “borderisation” with the involvement of foreign partners.

The agency noted that the cases of marking trees in the same area [of Chorchana forest were noticed back in 2016 as well. However, de facto Tskhinvali's leadership denied any connection.