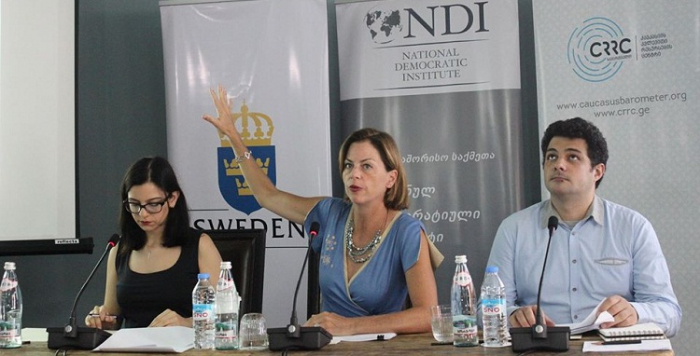 The ruling Georgian Dream party says that in the coming days they will have ‘deep discussions’ with NDI Georgia Director Laura Thornton as ‘there are questions regarding their polls which remain unanswered.’

The statement comes after yesterday’s polls released by NDI which show ‘declined trust in the current Georgian government and state institutions.’

We have had a meeting with Laura Thornton and have agreed to meet in the near future to have deep discussions regarding the polls. I am sure we will try together for the NDI polls to be more unbiased,” ruling party MP Mamuka Mdinaradze has stated.

Mdinaradze named CRRC Georgia, which technically carries out NDIs polls in Georgia, as a possible reason as to why the 'polls are biased.’

We know that CRRC Georgia is connected with the United National Movement party,” Mdinaradze said.

Mdinaradze stated that in the 2012 polls of NDI, which was carried out by CRRC Georgia, the Georgian Dream coalition allegedly only had 18 per cent of public trust, while the coalition received almost 55 per cent of votes in the 2012 parliamentary elections.

In 2013 the NDI conducted two polls in which the Georgian Dream ruling party presidential candidate had 29 per cent and 39 per cent support respectively. However, the candidate received 62 per cent of votes in the elections,” Mdinaradze said, adding that the polls were carried out by CRRC Georgia.

Mdinaradze stated that in the 2015 polls by NDI/CRRC the ruling party enjoyed 24 per cent of support (in April), 11 per cent ( in August) and 16 per cent (in November).

Polls continued in 2016 and they showed 16-17 per cent of support for the Georgian Dream, while we received 49 per cent of votes in 2016 elections,” Mdinaradze said.

He stated that the 2017 polls by NDI/CRRC forecasted 22 and 30 per cent of support for the Georgian Dream, while the party candidate for Tbilisi Mayor Kakha Kaladze received 51 per cent of votes.