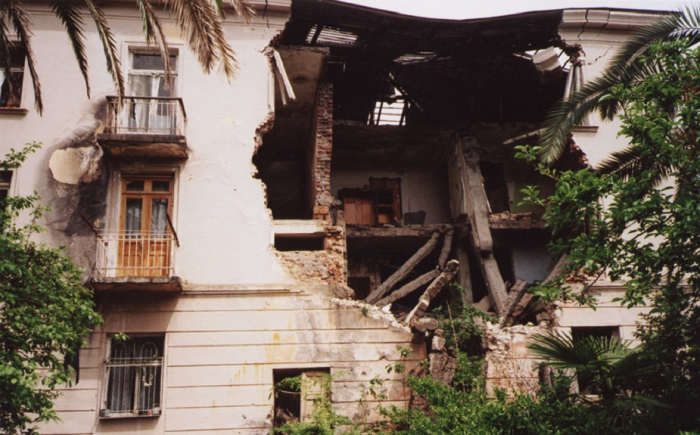 The overthrow of the Kremlin puppet Raul Khajimba in Abkhazia was a surprise to many. Of course, everyone understood that almost all Abkhazians hated Khadjimbu (except for the criminal clans “nourished” by it), that he had spread unprecedented corruption, that he did not give a damn about his Abkhazian people and he only thought how to curry favor with the “masters” —Kreml and the Armenian lobby. But the strength of his opponents from competing criminal clans was not enough, as well as the support of the same real "masters" of Abkhazia.

But on the side of the Abkhaz opposition, one force, significant on the scale of the separatist formation, took over - and everything changed. Khajimba had no choice but to pull her tail. We are talking about "new wave marauders" or "young generation" who did not participate in the separatist war against Georgia in 1992-1993 but were able to "turn around and profit" in another war - in the east of Ukraine in the Donbas.

This is primarily about Ahra Avidzba, the “hero of the DPR” who really became famous not so much for his military “exploits” as for exorbitant and arrogant looting. About this “hero”, “Caucasus Plus” already wrote in the material “Feats” of looters from separatist Abkhazia in Donetsk ”(https://kavkazplus.com/news.php?id=24085).

Judging by the available data, Ahra Avidzba and the militants subordinate to him in Donbas are larger than the “old wave” looters in Abkhazia in 1992-1993. Since both the scale of Donbas and the number of values ​​there are not comparable with Georgian Abkhazia.

But in the face of the “older” and “younger” generation of Abkhazian marauders, there is one significant difference. The older generation of marauders (whose interests were represented by the same Raul Khajimba) was able to plunder not only money and material values, but also seized the real estate of the murdered and expelled Georgians and power on separatist territory. Ahra Avidzba didn’t quite succeed in the Donbas. He plundered money, cars, and other valuables unintentionally, but he failed to get some posts in the authorities of the self-proclaimed DPR from Abkhaz (the call sign of Ahra Avidzba) and his assistants.

There were their "authorities" who hinted to Avidzba and his militants that of course, they could "heroically die" on the front line, but no one would give them real power in the Donbas. And they hinted that he “curtailed” his activity in Donetsk and gradually moved “to where he came from”. In order not to move to the place where, in 2018, his own comrade-in-arms, the Ossetian militant Oleg Mamiev (Mamaia), "moved" to.

Ahra Avidzba understood the “hints of the Donetsk comrades”. And he began to try as a "hero" to establish himself in separatist Abkhazia.

But it was not there. The older generation of marauders and "heroes" -killers from the 1992-1993 war did not recognize the "young", especially since they "hero" far from Abkhazia. Avidzba was never able to "legalize" in Abkhazia as a "politician" and become a deputy in the separatist parliament; he simply was not "drawn up" with the required number of votes.

But "on the criminal front," the weight of the Avidzba clan has increased dramatically. Ahra's cousin - Alhas Avidzba was even "crowned" as a "thief in the law."

But even here the criminal clans, who are in power in separatist Abkhazia with upstarts, decided not to stand on ceremony and simply “removed” the cousin of the “Donetsk hero” Avidzba. This apparently prompted him to quickly enter into a “coalition” with Raul Khadjimba’s political opponents and create a “revolution”.

“Khajimba’s fate was decided on the summer porch of the Sukhumi restaurant“ San Remo ”, where on November 22, 2019, two thieves in law, 38-year-old Astamur Shambu (Astik Gadautsky) and his peer Alhas Avidzba (Hasik, were shot dead. The latter was just a cousin Ahra Avidzba".

In principle, if Khajimba had “connected” his masters in a timely manner, then Ahra Avidzba would have quickly arranged either “heroic death” or “accident”. But Khajimba did not orient. But Avidzba and the “Abkhaz opposition“ removed from the feeding trough ”quickly found a common language, coordinated actions, and as a result, what happened happened. Khadjimba “left” and the “owners” were forced to agree with this, the new separatist puppet will be elected on March 22.

Does this mean that in Abkhazia after the election (where the opposition will obviously win) everything will "settle down"? This is out of the question. Moreover, the “squabble of looters” most likely provoked also certain forces that “laid eyes” on Abkhaz land. It is important for them to exterminate more Abkhazians with the hands of the Abkhazians themselves. At the same time, the looters of the “old” and the “new wave”, due to their spiritual degradation, greed and complete inability to a normal creative life, cannot understand this and are unlikely to understand it.