Armenia openly threatens Georgia with war “To the note of Tbilisi: hands off from Javakhk - original Armenian land!” 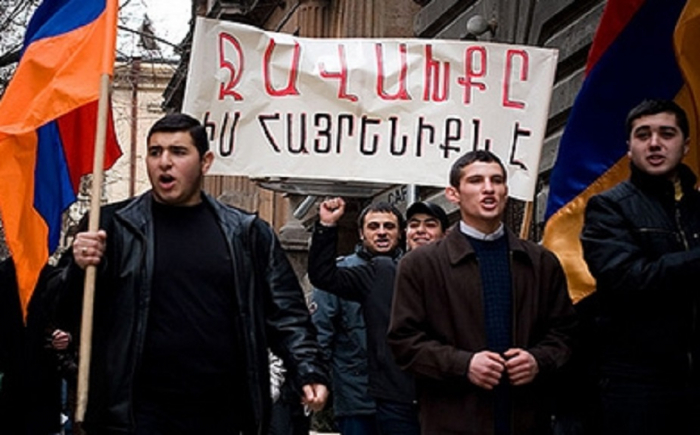 As the Kavkaz Plus suggested, the separatists and Armenian nationalists are not going to abandon the “Karabakh scenario” in relation to Samtskhe-Javakheti.

After the flagrant disobedience of Armenians from Akhalkalaki to the legitimate demands of the Georgian police, about which Kavkaz Plus wrote in the article “Armenians attacked Georgian police in Akhalkalaki”, confirmation that this is not a "random" episode. Armenia’s aggression against Georgia in Samtskhe-Javakheti is actually being prepared following the same scenario that was used against Azerbaijani Karabakh and open ultimatums are heard.

This is exactly the way material published in June 7 (after the Akhalkalaki incident) can be considered in the ArmenianReport edition close to the current Armenian authorities under a truly ultimatum headline: “To the note of Tbilisi: hands off from Javakhk - original Armenian land!” (http://armenianreport.com/pubs/219629/). We give completely this Armenian ultimatum:

“There is restlessness in the Armenian-populated Javakhk again. A few days ago, there was a scuffle provoked by Georgian police officers with local residents of Armenian nationality, which eventually turned into a violent protest by Javakhk people. According to Georgian media reports, a traffic violation in Akhalkalaki caused scandal and a scuffle between police and local residents.

As expected, in its commentary the Georgian Interior Ministry justified the actions of its employees and placed all the blame for what happened on the local population. Georgian society, which has always disliked the Armenians of Javakh, took a similar position as a whole.

However, we did not expect anything else from the Georgian authorities, or from ordinary Georgians. Harassment of the indigenous population of Javakhk began at the time of the collapse of the USSR, when frantic chauvinists led by Gamsakhurdia came to power in Georgia. Then the Armenians were openly told that they were an “alien element” on the “Georgian land” and they should go to Armenia. The fact that Javakh is originally Armenian land, and that Akhalkalaki departed to Georgia only under pressure from the British, the Georgians intoxicated with nationalism tried not to remember.

But even under Shevardnazde, the life of the Armenians in Javakh did not improve. We all remember very well how the population of the region was forced to leave for work in Russia, since the socio-economic situation of Georgia was extremely critical. Georgians treated Armenians negatively.

Even worse was under Saakashvili, who literally lay down under the Turks and Azeris. Accordingly, pressure on the population of Javakh has increased. Local residents were forbidden to receive education in their native language and in every way oppressed on a national basis. Saakashvili has improved the socio-economic situation in all regions of Georgia, except for Javakh. This was done specifically in order to survive from there the Armenian population, which prevented both Georgians and Turks with Azeris, who pulled their transport and energy communications through this region. The situation was aggravated by the withdrawal of the Russian military base from Akhalkalaki, because as a result, even more local people became unemployed, and even though weak, but at least some protection in the form of the Russian military disappeared, which untied the Georgian fascists. Jakakh activists who advocated the rights of the local population, official Tbilisi and Georgian propaganda were immediately attributed to the “separatists”, and repressions and punitive actions of the were carried out against them.

But the current Georgian authorities did not change the state policy towards the Armenian-populated Javakhk. Today, in the same way as under Gamsakhurdia and Saakashvili, a deliberate anti-Armenian policy is being pursued; Armenians living in their historical lands are being forced to be Georgianized.

Unfortunately, this attitude of Tbilisi towards Javakhians became possible only because of the passivity of Armenia. Our authorities that the former and current ones, do not want to spoil relations with Tbilisi because of Javakh, fearing that this could lead to the aggravation of the blockade state of our country. And Georgians feel this very well, and therefore they allow themselves to treat the region’s population in this way. If Georgians, or, for example, Azerbaijanis, were in place of the Armenians in Javakhk, the MIA would immediately take the most severe measures against police officers who allowed themselves to attack people.

Especially if there were Azeris in the place of the victims, then Baku and even Ankara would immediately put the Georgians on tomatoes. But there is no one to stand up for Javakh, and therefore the Georgians allow themselves what they would not allow in relation to others.

Today Javakhians are most vulnerable part of the population in Georgia, with all the ensuing consequences. And while the official Yerevan, our media and society will maintain a detached position, people on the other side of the border will continue to humiliate and insult on a national basis. How long will we let the Georgians have a similar attitude towards our compatriots, who have always been with us in body and soul, fought with us side by side in Artsakh? Maybe it’s time to remind Tbilisi about whose land Javakh people live in? We have already reminded it to Azeris. Has the Georgian time come, especially since our “northern neighbor” is just waiting for the moment to punch them on a hat?

Recall that the Armenians of "Javakhk" appeared in Samtskhe-Javakheti only in 1830, where they moved from under Turkish Erzerum. However, they appeared in Abkhazia even later - which did not prevent the Baghramyan battalion and other gangs from here to carry out the genocide and the mass expulsion of the Georgian population.

Thus, the ultimatum is more than serious. Moreover, he “inspires” Armenian “Javakhk” separatists to further disobedience to the Georgian authorities and escalation of tension. Indeed, as in the case of the Azerbaijani Nagorno-Karabakh, they are now confident that they will be provided with armed support.

The situation is extremely dangerous and the Georgian government should take urgent measures to curb Armenian “Javakhk” separatism. If today will not be taken decisive measures to establish law and order in this native Georgian land, it will be too late tomorrow.