Georgia, US state of Georgia mark 25 years of military partnership 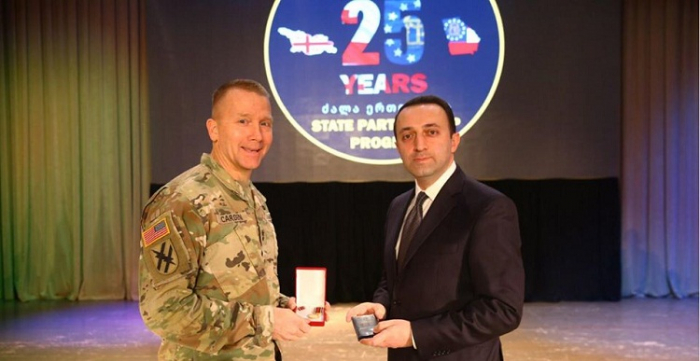 This week, Georgia and the US state of Georgia National Guard are celebrating the 25th anniversary of military partnership.

The state partnership programme fosters interoperability between the US and Georgia and promotes peace and security, the US Embassy to Georgia reports.

US Major General Thomas Carden is in Tbilisi to attend the 25th anniversary of the state partnership programme “to commemorate the enduring relationship between the country of Georgia and the US state of Georgia,” the US Embassy said.

Georgian Defence Minister Irakli Garibashvili praised the US-Georgia “strong and exemplary partnership” during the 25th anniversary event yesterday and stated that the partnership is “of the highest importance” for Georgia.

We are further developing our relations with the US, taking steps to further strengthen democratic institutions in the country and are striving to NATO integration,” Garibashvili said.

Acting US Ambassador to Georgia Elisabeth Rood, the US and Georgian officials attended the event held at the Georgian Defence Ministry Army Hall.