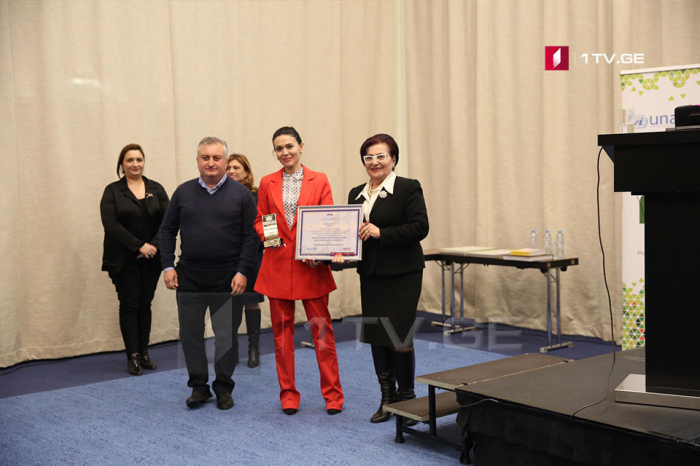 On 9 December 2019, the Public Defender of Georgia held an event dedicated to the International Day for Tolerance, which was attended by representatives of state agencies, diplomatic missions, international and non-governmental organizations, media, religious and ethnic minorities.

The Councils of Ethnic Minorities and Religions of the Public Defender’s Office traditionally identified and awarded the individuals, organizations and media outlets, which have made significant contributions to the development of a culture of tolerance in Georgia. They were awarded prizes and honorary certificates.

The Council of National Minorities nominated the Diverse Georgia project of Georgian First Channel as an advocate of tolerance in the category of “Media Outlet or Project”.

As the head of the Diverse Georgia project, Ramilia Aliyeva, said the issues of ethnic and religious minorities and their awareness are very important.

‘Two years ago, Georgian First Channel created the Diverse Georgia group that aims to raise awareness of ethnic minorities in Georgia and abroad.

The issues of ethnic and religious minorities and their awareness are very important,’ Ramilia Aliyeva stressed.

The nomination of “Individual” was won by Hamid Sadigov, a teacher from Gardabani, who expressed his position on forced marriage, which caused a negative reaction in his community, but gained solidarity among the broader public.

The category of “Public Servant” was won by Tbilisi City Council Chairperson Giorgi Tkemaladze for supporting ethnic minorities within the framework of the City Council activities. Kerim Ankosi, late public figure, journalist, literator, teacher and former member of the Public Defender’s Council of National Minorities, was unanimously named as an advocate of tolerance for his significant contribution to the process of civic integration and for promoting the Kurdish and Yezidi communities.

The Council of Religions named the following advocates of tolerance: “Individual” – Manana Kutateladze, religious diversity researcher in Georgia; “Organization” – Christian Students’ Union of Georgia, which has been promoting dialogue between various confessions for many years and has carried out a number of educational projects in this direction; “Public Servant” – MP Elene Khoshtaria, who played an important role in defending the position of religious minorities in the Parliament of Georgia this year.

The event was organized by the Tolerance Center of the Public Defender of Georgia within the framework of the USAID-funded project of the United Nations Association – “Promoting Integration, Tolerance and Awareness” (PITA).

The International Day for Tolerance is celebrated annually as a reminder of the need for respect, dialogue, and cooperation between cultures and civilizations. The Day for Tolerance was initiated by the UN General Assembly in 1996. On 16 November 1995, UNESCO adopted the Declaration of Principles of Tolerance.