Nazi Zatulin rushed to defend the Nazi Nzhdeh, cursing himself before the Armenian nationalists 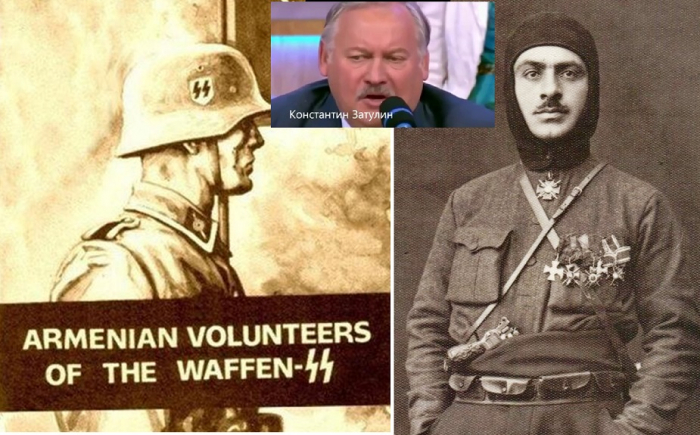 It is difficult to find among Russian politicians a figure who would have served so much in front of the Armenian lobby as Konstantin Zatulin, and who for the time being holds the post of first deputy chairman of the State Duma Committee of the Federal Assembly of the Russian Federation on CIS affairs, Eurasian integration and relations with compatriots. Moreover, by "compatriots" Konstantin Zatulin means almost exclusively Armenians and separatists ("Artsakh", Abkhaz, Tskhinvali, etc.). Over 1 million Azerbaijani refugees from Karabakh and over 300 thousand Georgian refugees from Abkhazia, Zatulin, purely Nazi, does not refer to “compatriots,” but also refuses to count as people.

The Nazi essence of Konstantin Zatulin is very clearly manifested in the very last days.

After the efforts of the Russian patriots in Armavir of the Krasnodar Territory, a memorial plaque glorifying the Nazi criminal Garegin Nzhdeh was dismantled, Konstantin Zatulin, apparently, received an order from his Armenian masters to begin the rehabilitation of the Nazi Nzhdeh and, in general, Armenian Nazism as a phenomenon. This is what the recent speeches and publications of Konstantin Zatulin are dedicated to, in particular, in the liberal Moscow Komsomolets “Go to the library more often” (far from Russian patriotism) (https://www.mk.ru/social/2019/12/05/polemika-vokrug-garegina-nzhde-legko-byt-krepkim-zadnim-umom.html).

As you might guess, Konstantin Zatulin stands for the “right” of Armenians to consider Nazi executioners “heroes”. For the fact that in addition to Russians and Jews, they also destroyed Azerbaijanis and Turks.

“I do not write Nzhd a panegyric and do not propose to erect monuments to him in Russia. I just propose recognizing the right of Armenians to a special opinion about him and not ascribing to them in the most unscrupulous manner a tendency towards the historical rehabilitation of fascist criminals. By the way, in the post-war Soviet Union, they well understood the difference between Vlasov and Ko, who were hanged by the verdict of the tribunal, and Nzhde, whom they wanted to use in the fight against Turkey. ”- notes Konstantin Zatulin.

Regarding why Nzhde was not shot and hanged like Vlasov, there is a simple answer to this and Konstantin Zatulin knows him well. Nzhde was sentenced to the ambassador of 1947 when the death penalty was abolished in the USSR. In 1948, a court of the USSR sentenced Nzhde to 25 years in prison - the highest sentence at that time. And in 1950, the death penalty was restored in the USSR.

the Nazi executioner Nzhde, one might say, was lucky, he was sentenced during the time period when the USSR simply did not have an estimated execution. If the trial took place either before 1947 or after 1950, the fascist killer would inevitably be executed.

Naturally, there was no talk of any use of a bloody butcher against Turkey (as Zatulin is trying to imagine). Nzhde certainly wanted to offer the USSR his “services”, but he did it in principle with the banal purpose of saving his own skin, since the conditions of imprisonment for Nazi henchmen in Soviet prisons and camps were quite strict.

Moreover, the most interesting thing was that Nzhde could not resist in a letter to Stalin, so as not to muddy his accomplice, the same terrorist, Nazi, and bloody executioner as he - Drastamat Kanayan (General Dro). The same organizer of the Armenian Nazi units and the killer of the civilian population, like Nzhde himself. Here is an excerpt from the letter:

“At the risk of my life, I made impossible the beginnings of the traitor to the homeland of Dro against Armenia. I dissuaded the saboteurs he had prepared to go to Soviet Armenia (and to one of them, Greyra from Meghri, I made an escape to Bulgaria so that he would not be forced to send to Armenia)”.

That is, how to serve Hitler and kill civilians, then Dro and Nzhde are comrades and “brothers”. And how to save the skin, so Nzhde declares his accomplice Dro "a traitor to the homeland."

By the way, among Armenian nationalists, they are both “heroes”, and Nzhde and Dro. Both monuments are erected in Armenia, and streets and squares are renamed in honor of both. And then it turns out one "hero" considered the "traitor" of another "hero". So which of them is a “hero"?

In addition, trying to "make extreme" Drastamat Kanyan and present himself as "white and fluffy" Garegin Nzhde involuntarily speaks out. It turns out that he not only talked with Nazi punishers and saboteurs, but he knew very well what tasks he was assigned and could correct these tasks. He was one of the leaders of Nazi saboteurs.

Thus, this is not just a Nazi criminal, but a high-ranking Nazi criminal. After all, a “man from the street” who does not work in the leadership of the Third Reich’s intelligence services cannot give instructions to saboteurs who are trained in the strictest secrecy by definition, especially since they also obeyed him. This is possible only if Nzhde was the head of these saboteurs and they obeyed him.

And after that, Konstantin Zatulin will tell us tales that Nzhde “did not take part in the formation of Armenian units to serve in the Wehrmacht’s troops, did not flaunt his military uniform and did not stain himself by participating in military operations against the USSR. So he himself, in a letter to Stalin, admits that he could correct orders to change tasks for Nazi punishers and saboteurs directly involved in the war against the USSR. So, he gave these orders and sent saboteurs himself.

The fact that Nzhde for some reason decided not to send one of the saboteurs to Armenia does not cancel the fact that hundreds of other saboteurs committed their bloody crimes in other republics of the USSR by his orders. True, apparently, from the point of view of another Nazi Zatulin, only “Aryans” -Armenians are people. But other people, including Russians, can be killed with impunity.

It turns out that, having served the Armenian nationalists, the “professional patriot of the Russian Federation” Konstantin Zatulin turns into a banal propagandist of Nazism. Moreover, in a country that paid a terribly expensive price for the victory over Nazism, tens of millions of lives, and above all, Russian people.

Glorifying the Nazi killers, Konstantin Zatulin spits on the graves of these Russian people. And if he is not stopped in this sacrilege, then with the same success as Nzhdeh, he will defend Goebbels, Goering and other Nazis.