Armenia is against the return of Georgian refugees. And she did not vote “against” together with Russia because she is not going to extradite the killers of the Russian military 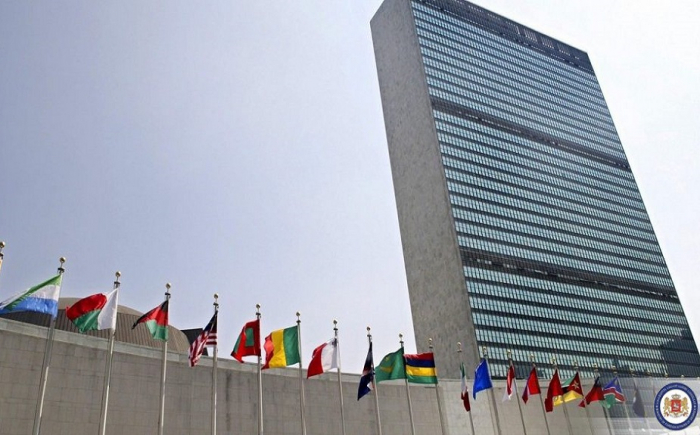 The UN General Assembly at its 73rd session adopted a resolution on the status of internally displaced persons and refugees from Abkhazia, Georgia and the Tskhinvali region / South Ossetia, Georgia, initiated by 45 countries. The resolution says that it is necessary to “respect the property rights of all internally displaced persons and refugees affected by the conflicts in Georgia, and to refrain from acquiring property in violation of these rights”. We are talking about those “trophies” - houses and apartments - that were seized in Abkhazia by the separatists and Armenian nationalists, who exterminated and expelled the Georgian population.

The resolution was not supported by 15 countries, including Russia, Belarus, Burundi, Cuba, North Korea, Myanmar, Nauru, Nicaragua, Sudan, Syria, Venezuela, Vietnam, and Zimbabwe. These countries voted “against”.
All past years, the Republic of Armenia has voted against the resolution defending the rights of Georgian refugees from Abkhazia and the Tskhinvali region. This year, Armenia also did not support the resolution. But she did not vote openly against her either. She just did not take part in the vote.

Thus, Armenia is still against the return of Georgian refugees in Abkhazia and the Tskhinvali region and against the observance of their property rights. But she did not vote together with Russia against it. And you can guess why.
The fact is that on the eve of the UN General Assembly’s voting on the rights of Georgian refugees between Russia and Armenia, a scandal broke out regarding the murder of Russian Special Forces troops Nikita Belyanin by Armenian thugs.

The Russian commando had previously served under a contract in the GRU division of the Russian Defense Ministry, was awarded departmental awards and presented to the state for participating in the battles for Palmyra and Aleppo in Syria. Where, by the way, defended Syrian-Armenians from Islamists. And the representatives of the "long-suffering" people "thanked" the Russian soldier in his homeland, where they are already disposed of as "masters."

Nikita Belyankin was killed in the village of Putilkovo near Moscow when he stood up for two Russians who were beaten by several Armenians. Again, it is very similar to the representatives of the “ancient and courageous people” - to mob on one or two unarmed people. Then they are very "brave", especially armed. Nikita Belyankin intervened in a fight, trying to protect the beaten - and received a stab in the heart, from which he died almost immediately.
The assassins naturally immediately tried to escape to Armenia. Some of the minor participants in the fight were detained - but the main suspect in the murder, Grigor Oganyan, and other accomplices, managed to fly from Moscow to Yerevan.

First, the Armenian lobby and pro-Armenian media wanted to “hush up” the incident. But the outraged Russian public began to demand the extradition of criminals from Armenia. Thus, as it were, the patrons of the Armenian lawlessness in the Kremlin would not want to - there will most likely be a request for extradition. And the question arises - will Armenia give up the killers of a formally “allied” Russia?

The answer to this question gave a vote on Georgian refugees from Abkhazia and the Tsikhval region. The fact that Armenia is against their return - but this time did not vote with Russia against it - this is, so to speak, a vivid “spittle” towards Russia. An eloquent hint - “we will not give out the murderers of the Russian soldier”. Because they are “heroes” for us, as they are the “hero” for the Armenian nationals, the executioner of the Georgian population of Abkhazia, Galust Trapizonyan, whom they met with open arms the other day in Yerevan.

Well, of course, Armenia is still against the return of Georgian refugees to Abkhazia and the Tskhinvali region, and even more so against the Armenian “heroes” giving away the “trophies” to the Georgians expelled by them.
Just today, by its non-participation in voting at the UN General Assembly, Armenia not only showed that it does not consider as a people “brothers-Georgians”, and especially Georgian refugees, but also Russians. Including the soldier who shed blood for Armenians in Syria - but in “gratitude”, he was killed by Armenian youths who had ganged up near Moscow.

Well, how does Armenia relate to Georgian refugees very well show the debate of the vote of previous years.

The UN General Assembly, starting from 2008, has consistently adopted resolutions on the return of Georgian refugees to Abkhazia and the Tskhinvali region, reaffirming the basic rights of forcibly displaced persons, regardless of their ethnicity, and, above all, their right to voluntary, safe and dignified return to their homes. The resolution also notes the need to respect and protect the inherent right of property of refugees (this right in particular is violated in Abkhazia by Armenians who seized houses and apartments of Georgians).

And each time Armenia voted against this resolution. Recall the history of these polls:

1. In 2008, the resolution on the return of Georgian refugees (that year - only to Abkhazia, since the voting took place before the August 2008 conflict) was supported by only 14 countries, 11 states voted against including Armenia, and 105 were abstained;

3. In 2010, the number of supporters of the resolution increased to 50, 17 countries opposed including Armenia; 86 states abstained;

5. In 2012, 60 countries voted for the return of Georgian refugees to the occupied territories. There were 15 states against, including Armenia, and 82 countries abstained;

6. In 2013, 62 countries voted in support of the resolution on the return of Georgian refugees. Against there were 16 countries including Armenia, 84 states abstained;

7. In 2014, 69 countries already voted for the resolution on the return of Georgian refugees, 13 countries, including Armenia, were against and 79 countries abstained;

9. In 2016, 76 UN member states voted for the resolution on the return of Georgian refugees, against 15 including Armenia, abstained - 64.

11. In 2018, the resolution “On the status of internally displaced persons and refugees from Abkhazia, Georgia and the Tskhinvali region / so-called South Ossetia, Georgia ”was supported by 81 countries. Against - 16 countries including Armenia. 62 countries abstained.