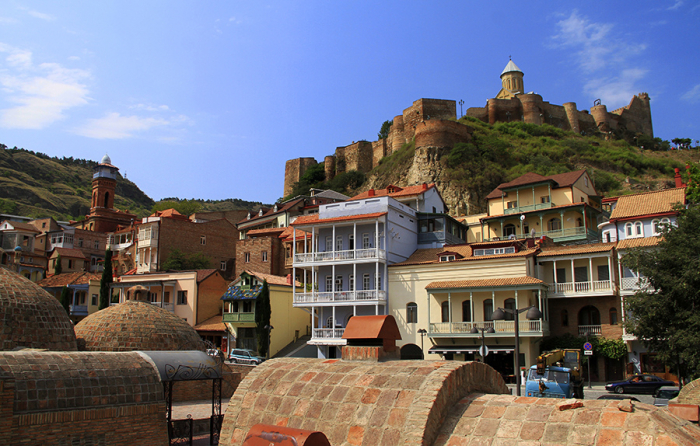 Recently published material on the Armenian nationalist resource Voskanapat “Amiram Grigorov. The Armenian Question” (https://voskanapat.info/?p=36266&l=en). This libel based on historical lies, overflowing with the praise of Armenian terrorists and hatred of Azerbaijanis and the Russian Empire (which incidentally settled the Armenians on foreign lands), touched also the Georgians.

Here are some particularly angry things about Georgians from that “historical study”:

"1903 year. The Armenians launched a resistance campaign. They demand the return of national schools and the return of the loot. Golitsyn, meanwhile, found himself an accomplice - Prince Nakashidze. Having Georgian roots, the Prince hated Armenians. Among the Georgians, sometimes they come across, despite the fact that both of them, being in a Muslim environment, could very well become allies. However, this last happened extremely rarely: the Armenians and Georgians did not trust each other, and this, in part, can explain the Muslim successes in the Caucasus. To explain the situation should give a brief reference.

Once the Georgian church was subordinate to the Armenian, and the dogma of the first corresponded to Armenian. The highest church officials of the Georgians studied in Etchmiadzin. In 605, schism occurred. Kirion, who studied first in Byzantium, and only then - in Echmiadzin, broke off relations with Dvin and switched to the Greek-Chalkedonian version of Christianity. Patriarch of Dvin Abram wrote letters to the “Catholicos of Virk” (Virk, or Vrastan is Georgia in Armenian), but did not persuade him to return “to the bosom of the true and only God-saved Christian church”. After which he called Cyrion "a scorpion and a spider in human guise, a schismatic, similar to Roman and Latin pagans, a villain and a Christ seller." From this split, in fact, the Georgian church began its’ own “activity”. Moving away from the Armenians in the church sense, the Georgians created their own unique culture, which, having arisen from the Armenian yeast, now refers to the Armenian, approximately as Japanese to Chinese. If the oldest samples of Georgian writing are so similar to Armenian that a layman will not see the difference, then later the Georgians developed a rounded font that does not look like any type of Armenian letter. However, church affairs have never, even to this day, been forgotten”.

In the aforementioned "historical excursion" all lies from the first to the last word. Especially about the true patriot of his people and the faithful servant of the Russian emperor, Prince Mikhail Nakashidze, who did everything to prevent the terror of the Armenian Dashnaks against the civilian population.

At the same time, in the same material, Amiram Grigorov writes with enthusiasm that “Nakashidze was executed - bombed by the hero of the Armenian people Dro Kanayan. After that, the party gained popularity among the Armenians in the city, since no one else defended them. ”

And Amiram Grigorov does not mention at all that the same “Armenian hero!” Drastamat (Dro) Kanayan subsequently became along with another Dashnak terrorist Garegin Nzhdeh a Nazi, Hitler’s servant. Nzhdeh and Dro began with the murders of Azerbaijanis and Georgians, then became the organizers of mass killings, executioners of the Russian, Jewish and other peoples.

If the Nazi degenerates for such as Amiram Grigorov are heroes, then what else can we talk about. "Tell me who your hero is and I will say who you are."

What kind of “allies” can be Georgians with Armenian nationalists, who pay Georgians exclusively good for good, in return for all the benefits that Armenians make Georgians pay exclusively for treason and atrocities.

It is enough to recall the behavior of the Armenian militants in Abkhazia, who killed the Georgian civilian population and appropriated the land on which the Georgians recently sheltered Armenian immigrants from Turkey. Which moved to Georgian lands in the form of "unfortunate refugees".

How then can one “trust” Armenian nationalists?

About Muslim successes. By the way, Muslims had successes in Europe. The Turks even besieged Vienna. And is it really these successes they owe to the “distrust” of the Georgians to the Armenians?

Let Amiram Grigorov better remember that the beginning of Arab successes (the conquest of Palestine and Syria by the Arabs, including Jerusalem) took place thanks to the Armenian military commander, the traitor Vagan (Vaan), who at the decisive moment rebelled against his rightful sovereign - the Roman (Byzantine) emperor. Using the war, Vagan proclaimed himself “emperor”. The Arabs, having captured Syria and Palestine, then dealt with Vagan, as the rebels and traitors deservedly despised.

The similarity of the Georgian letter “Asomtavruli” to Armenian is a long-standing Armenian speculation. External similarity is characteristic of many little-connected writing systems. By its “roundness", for example, some East Asian writing systems that are not connected with Georgian writing are somewhat similar to the Georgian letter "Mkhedruli". Amiram Grigorov, let him better explain the similarity of the Armenian letter to the Ethiopian, which is much older than the Armenian one. So who borrowed from whom?

The article by Amiram Grigorov specifically makes an almost racist emphasis on the "superiority" of Armenians over Georgians and Azerbaijanis, and this actually justifies the Armenian dominance in the South Caucasus at the beginning of the 20th century.

“Over a decade, the Armenians have mastered a lot of new fields: they began to penetrate into the bar, in medicine, in science, in business and printing. Using the new conditions, the Armenians got into the heads of large cities - Tiflis, Alexandropol, etc. The success of the Armenians had the same reasons as the success of the Jews of the Western Territory - general literacy in their native language, fueled by the system of church and monastery schools operating from the Middle Ages. Georgian serfs were illiterate. Muslims, except for mullahs who knew Persian writing, and a narrow layer of nobility, too. ”

Again, lies and slander. Among the Armenians there were a lot of illiterates, literacy was not at all "total." And among the Georgian and Azerbaijani peasants there were many literate. It’s just that Amiram Grigorov does not say that “capturing” certain areas, Armenian nationalists did not allow anyone there except Armenians.

Even where literacy was not needed - but there were “live” money, the Armenian migrants completely “squeezed” out such areas as handyman-muschi of Georgian-Rachin residents in Tbilisi, after which they “pushed up” the prices for their services.

Armenian immigrants from Turkey took away bread from Georgians and Azerbaijanis not because they were smarter and more hardworking. They simply acted more impudently, did not stop at bribery, blackmail, petty vileness against competitors who did not show "tribal cohesion" and, most importantly, arrogance, and therefore lost ground.