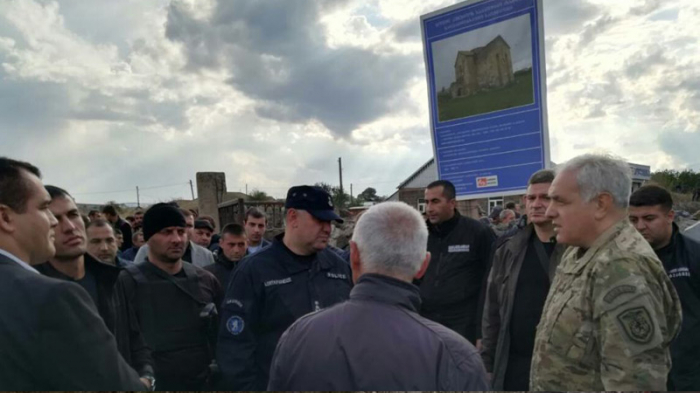 Armenian extremism in Satsmkhe-Javakheti not only proved itself, but also came to direct attacks on the Georgian forces of law and order - and these are all signs of an anti-state insurgency. In fact, this is the first phase of the separatist rebellion - if it is not nipped in the bud and severely punished the guilty and instigators.

We remind you that on September 30, in Kumurdo, Armenian extremists attempted to seize the unique Georgian cultural monument, which is under reconstruction, and one of the most important shrines of the Georgian people and the Georgian Orthodox Church - Kumurdo Cathedral. Armenians were going to illegally install their Armenian khachkar on the territory of an ancient Georgian temple, allegedly “at the place of burial of Armenians”, although there were no Armenians in Kumurdo and could not be until 1830.

It is already  clear that this was nothing more than a blatant attempt by the Armenian extremists to seize the Georgian temple.

The provocation was long and carefully prepared. As early as the summer of 2015, 180 Armenians from the village of Kumurdo of the Akhalkalaki municipality filed a so-called “complaint” with 180 signatures to the chairman of the municipal assembly of Akhalkalaki, Hamlet Movsisyan, chairman of the government, Eduard Agasaryan, member of the Georgian parliament Samvel Petrosyan, and the Armenian Apostolic Armenian Vicar inSamtskhe - Javakheti Babken Salbiyan demanding to “return” the allegedly “ancestral bones” dug out during archaeological excavations in the courtyard of the ancient Georgian church of Kumurdo, carried out by the Cultural Protection Agency of Georgian heritage.

But, first of all, there could be no Armenian bones near the Orthodox church, since the canons of the Orthodox Church prohibit the burial of Gentiles and heretics (who are Orthodox from the Orthodox point of view) near an Orthodox cathedral. The arrogance of local Armenians is all the more glaring if you consider that their ancestors just destroyed the Kumurdo church.

There are some evidences of an outstanding Russian scholar, a professor of Roman law at Kharkov University, Leonid Nikolaevich Zagursky about this, who wrote about the barbarity and vandalism of Armenian immigrants in the Georgian lands of Samtskhe-Javakheti:

“... we turned a little away in order to inspect the ruins of the church in Gumurdo. This famous old church is located in the most pitiful form, thanks to Erzurum settlers, who dismantled a significant part of the remarkable monument to build their church, school and their pitiful dwellings. The vandalism of immigrants did not make itself felt in Gumurdo alone. ”(L. Zagursky,“ A Trip to Akhaltsikhe District ”, 1872)

From this evidence of the Russian scientist, it is clear that the Armenian population in Samtskhe-Javakheti is not at all fundamental. These are recent immigrants, and, as Professor Zagursky testifies, the settlers are wild, absolutely uncultured and arrogant.

The fate of Kumurdo shows how Armenians built their churches on Georgian lands - they barbarously destroyed Georgian temples, many of which are architectural masterpieces of world importance. And now the descendants of those alien barbarians living in Samtskhe-Javakheti, the Armenians brazenly declare that the temple of Kumurdo, which their ancestors barbarously dragged to their homes and sheds, is “Armenian”, and that these wild “ancestors” are buried near its walls.

The significance of the restoration of the Kumurdo Cathedral in the immediate vicinity of the world-famous Georgian cave monastery complex Vardzia is enormous. This temple is one of the greatest shrines of Georgia.

The Kumurdo temple was built by order of the king of Western Georgia (the “Abkhazian” kingdom) of Leon III in 964, when Zviad Marushiani was the head of the Javakheti region. There is a corresponding inscription in Georgian on the walls of the temple: “Iohann the bishop laid the foundation of this church with the hand of a sinful Sakotsari during the reign of Leo in 964 in May, on the Sabbath day of the first moon in the governorship of Zviad.” There are many graffiti on the walls of Kumurdo Cathedral - more than 20. All of them, without exception, are Georgian. There is nothing Armenian here and there could not be anything, since Armenian immigrants from Turkey in these Georgian lands appeared only after the conquest of this territory of the Russian Empire.

There are all indications that the provocation in Kumurdo was specially prepared by Armenian extremists for autumn 2017. Moreover, there should have been a “cover” of this provocation in the face of a frenzied Armenian nationalist and “Javakhk” separatist Sergey Minasyan, whom Yerevan intended to appoint as ambassador to Tbilisi. But fortunately, the Georgian government, realizing the danger that this extremist represents as the ambassador of Armenia to Georgia, did not issue an agrémen (official consent) for the appointment of Minasyan.

Nevertheless, the Armenian extremists organized a provocation in Kumurdo even on the eve of the launch of the strategically important Baku-Tbilisi-Kars railway. The goal is clear - to destabilize the situation in the region through which the railway passes. But there is another, so to speak, “strategic” goal of provocation, which, if achieved by Armenian extremists, will lead to a deadly threat to Georgia and the Georgian Orthodox Church.

The fact is that the Armenian church has officially put forward claims for 442 Georgian churches. But the Kumurdo temple is not on this list of official Armenian claims! He is on the list of 650 Georgian churches, which Samvel Karapetyan, a well-known falsifier, calls “Armenian.”

Thus, Armenians attempted to seize the “landmark” temple “beyond” the official claims of Echmiadzin.

Why this was done is not hard to guess. After all, if this provocation were crowned with success, the Armenians would have taken away not only all the 442 churches that the Armenian Apostolic Church officially put forward, and another 23 temples for which the Armenian Catholic Church officially claims - but in general all Georgian churches. In the same brazen way - to break into the temple, establish your khachkar and declare this temple "Armenian", so the Georgian Orthodox Church could lose all of its churches in general, and the Georgians in the long run of their entire native land. After all, if you listen to the Armenian nationalists, then the Georgian nation has no right to exist at all, since everything in Georgia was created and built by “great Armenians”.

What kind of arrogance Armenian extremists have and how aggressively they treat Georgian law enforcement agencies can be clearly seen from this video clip from the scene.

Nevertheless, the Armenian media have already raised a real howl, accusing the Georgian authorities almost of the “genocide of unfortunate innocent Armenians”. Here is a message from the News Agency of Armenia –NEWS.am:

“During the incident in the city of Gumburdo in Javakhk on September 30, police officers fired into the air and beat them with clubs of local Armenians. The co-chairman of the unregistered “Virk” party David Rstakyan stated this in an interview with the Armenian News correspondent –NEWS.am.

“As a result of the violence used by the police, a lot of Armenians suffered, many had head injuries. After the clashes, the Armenians were detained. Now the head of the Interior Ministry is here, we hope that the situation will be settled” Rstakyan said.

Let us remind you that in Javakhk this morning a confrontation began between the residents of Gumburdo and the police. Residents wanted to establish a khachkar at the place of reburial of the remains of their ancestors in the courtyard of a 10th century church, which is being restored. The police did not let them into the yard, saying that they had a corresponding order in their hands. Residents did not want to give up. The situation escalated. Special forces were called to the scene of the incident. ”

In general, it turns out that the Georgian police in the Georgian land tried to defend the Georgian shrine from the attempt of illegal seizure by the descendants of the barbarians-aliens who destroyed this shrine at one time - and they are also guilty!

The Georgian Interior Ministry issued an official statement in connection with the clashes between Armenians and the police in the village of Kumurdo in the Georgian region of Samtskhe-Javakheti.

“In the village of Kumurdo of the Akhalkalaki region a group of local residents tried to penetrate the territory of the monument. Restored temple of the 10th century is protected by the security police of the Ministry of Internal Affairs. Security police officers did not allow them to enter the temple, after which part of the local residents physically confronted them, and they threw stones at the police. As a result of the incident, police officers were injured and several cars were reported on the balance of the Ministry of Internal Affairs. In the shortest possible time, Interior Minister Georgy Mgebrishvili arrived at the scene. He met with the local population. By this time, the situation in the village of Kumurdo is discharged.

In connection with the fact of the incident, an investigation has been launched on the basis of Article 353, Article 1, Part 1, Article 187, Part 2, and Part 3 of Article 239, ”the Ministry of Internal Affairs said in a statement.

All these show that the Georgian law enforcement agencies acted extremely gently. In such cases - attacks on law enforcement officers, the police must detain the attackers and in the case of resistance shoot to kill. The organizers of the riots should be arrested and prosecuted. In addition, in the event of further similar incidents in the Samtskhe-Javakheti region, a state of emergency should be introduced, and provocateurs and ideologists of separatism should be arrested and brought to justice. And most importantly, the Georgians should not allow the Armenian nationalists to dominate the Georgian land and seize Georgian churches. Armenians in Georgia already have enough functioning churches that stand empty even on holidays and are used not so much for prayer as for propaganda of extremism.