The executioner of the Georgian population of Abkhazia Trapizonyan, the separatist "MFA" and the leader of the so-called "South Ossetia" freely travel through Yerevan to occupied Karabakh 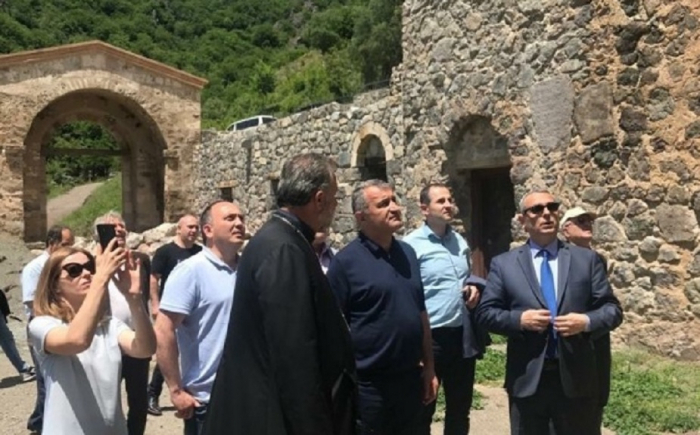 Another evidence of the so-called "friendship" and "fraternity" of Armenia towards Georgia appeared.

The official delegation from separatist Abkhazia under the leadership of the so-called “Foreign Minister” Daura Kove arrived in Azerbaijani territories occupied by Armenia in Khankendi (Stepanakert). The delegation of the “Hero of Abkhazia”, the chairman of the Armenian community of Abkhazia, one of the commanders of the notorious for their atrocities against the peaceful Georgian population of the Bagramyan Battalion Galust Trapizonyan and “public figure” Valery Mayromyan.

A delegation from separatist Tskhinvali headed by puppet "president" of the so-called "South Ossetia" Anatoly Bibilov arrived there.

Naturally, the separatists and state criminals guilty of exterminating the Georgian civilian population of Abkhazia arrived in occupied Khankendi through Yerevan. And the leadership of the Republic of Armenia welcomed them and "conducted" them to the occupied Azerbaijani territories.

At the same time, Galust Trapizonyan does not do this for the first time. In an interview with noev-kovcheg.ru, he himself admitted that the militants of the Baghramyan battalion and other separatist formations from Abkhazia were transferred to occupied Azerbaijani Karabakh in April 2016.

“During the April 2016 events, we all came to the defense of Artsakh. Our volunteers went to Karabakh, they were at the forefront,” – Recalls Trapizonyan.

What "skills" these thugs were going to realize in Karabakh - you can guess, at least from the recollections of the Armenian nationalist Zori Balayan, where he described the atrocities of his fellow tribesmen against the peaceful Azerbaijani population of Karabakh. However, in April 2016, the Azerbaijani army repulsed the Armenian aggressors, and only international mediators miraculously saved them from total defeat. So, the skills of the killer and marauder Galust Trapizonyan and his associates this time turned out to be unclaimed.
But the Armenian aggressors continue to escalate tension in the occupied Azerbaijani lands, and therefore it is possible that Armenian militants from the same Abkhazia will again be transferred to Karabakh. Naturally, all this is organized by the Yerevan regime, which at the same time welcoming the killers of the civilian Georgian population, talks a lot about “friendship and fraternity” with Georgia and even seeks to organize the transit of goods for itself through the same separatist Abkhazia, but without the return of refugees.

Galust Trapizonyan is also openly proud that he destroyed the Georgians and received the title of “hero of Abkhazia” for this. Here is an excerpt from his interview with “Echo of the Caucasus”:

Anaid Gogoryan: Galust Parnakovich, we all know that you are a Hero of Abkhazia, tell us a little about yourself. What are you doing now?
Galust Trapizonyan: I would like to be not a war hero, but a labor hero. In the Bagramyan battalion, I was one of the commanders. Indeed, I am proud and glad that I am an Armenian that the Armenian battalion has completed all the tasks assigned to it. Our Commander-in-Chief, the first President of the Republic of Abkhazia, Vladislav Grigorievich Ardzinba, noted this. The commander-in-chief, also the Minister of Defense Sultan Sosnaliev, also commanders, all who led during the war, they all noted that the Armenian battalion was one of the most disciplined, and the discipline was such that we carried out all the tasks. This is in relation to military action. After the war, of course, there were many problems. We must educate our children in the spirit of patriotism. This is the first. Our homeland is Abkhazia. And we owe our children to bring up patriots of Abkhazia. We are building an Abkhaz state where all nationalities that live in Abkhazia should flourish; they should also feel comfortable and have a wonderful life. And we, naturally, will do everything to strengthen, to build the Abkhaz state.

Galust Tranpizonyan boasts that he and his Armenian battalion named after Baghramyan "completed all the tasks left behind" - he killed and expelled the Georgians so that people like him would live in Abkhazia "perfectly." In the "trophy" houses. And Galust Trapizonyan himself “cut off” a very good trophy - he is the “owner” of the “Gagripsh” sanatorium and has a huge income from it.
Executioners such as Trapizonyan will “flourish” and quietly fly to Yerevan, while Georgian refugees, whose relatives and friends have brutally killed by Trapizonyan and other militants, are deprived of the opportunity to even go to their graves.

Executioner Trapizonyan does not forget about the "spirituality". From the same interview:

Anaid Gogoryan: I would like to talk about your role in the formation of the Armenian Church.

Galust Trapizonyan: First of all I want to thank the first president Vladislav Grigorievich Ardzinba, then the speaker of the parliament Socrates Rachevich Jinjolia and the head of Gagra Ruslan Yazychba. At first it was supposed to be the Alley of those who died in the “Patriotic War of the People of Abkhazia” in 1992-1993. When I came to the president with such a proposal, of course, he immediately approved. Then a place was allocated in the city of Gagra, we made the Alley of the dead. Then he had to build a small chapel in order to be able to come there, to honor the memory of our brothers and sisters. Unfortunately, the place was very small, and then it was decided to build a temple. Three years ago, the opening of the temple took place, where everyone who believes can come. It does not matter what nationality. We have the abbot of the temple; it is the representative of Echmiadzin Ter Sedrak Aznavuryan.

So, yes, for Armenians in Abkhazia was found a place under the church, and they invite everyone there, except Georgians. But “Armenian brothers” do not allowed Georgians to appear neither in Gagra, nor even in separatist Abkhazia. Besides, the “Armenian brothers” want to take away at least 465 more churches that are Georgian and brazenly destroy those Georgian churches that stand in their settlements on Georgian territory. Another few decades of such “friendship and fraternity” - and from Georgians there will not be even a scrap in their native land.

Georgian government should put the question to the Armenian authorities: such criminals as Galust Trapizonyan must be extradited to Georgian justice. Armenia should completely stop both directly and through the puppet "NKR" to support the separatist regimes of Sukhumi and Tskhinvali and to host their delegations.