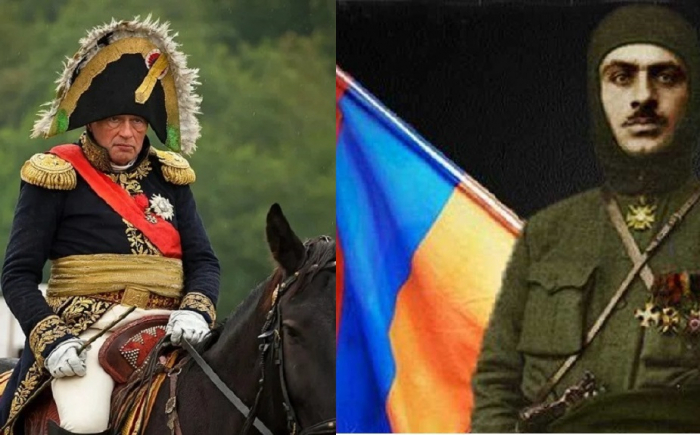 In the first half of November 2019, two events stirred up Russia.

The first is a terrible crime. In St. Petersburg, 63-year-old professor, associate professor of St. Petersburg State University, history teacher Oleg Sokolov, a well-known specialist in French history, who liked to play the role of “Napoleon” during historical reconstructions, killed and disassembled 24-year-old graduate student Anastasia Yeshenko with a saw on November 7.

But the worst thing is, the next day Sokolov received guests and, as if nothing had happened, feasted cheerfully. Then when next to the closet lay the partially dissected corpse of the graduate student.

Doesn’t resemble anything? That’s how Armenian nationalists "today" welcome "tourists and guests in Abkhazia and Karabakh. In the houses under which the corpses of the brutally murdered owners of these "captured" houses - Georgians and Azerbaijanis - were hastily buried at one time.

The killer was eventually caught after the “holiday” while trying to drown the victim’s sawn hands in the Moika River.

"Tell me who your friend is, and I will tell you who you are." Here, for example, sayings of the “guest” Oleg Sokolov, who feasted with him, in an apartment with a corpse in the closet that has not yet cooled down - blogger Dmitry Puchkov (known as Goblin) regarding the mythical “Armenian genocide of 1915” (https: // www.youtube.com/watch?v=JDEVLD8n29M):

“What does it mean to illuminate genocide from both sides, comrade?” Call Turks, call on the participants in the genocide? Or what? The Turks gathered in Istanbul the Armenian intelligentsia in the amount if I remember correctly 800 people: writers, composers, architects and all were killed. Then many Armenians served in the Turkish army: they seized officers from the Turkish army as Armenian soldiers and killed them all centrally under the leadership of the authorities. After that, when Armenian women and children remained defenseless, they killed and a half million.

What interests you, who did it, and why? The Turks did this. Why did you do it? It is then that the Armenians supported Russia. They were killed for pro-Russian sentiments ... Which side are you interested in? There is exactly one side, as in the classic’s saying: "The wolfhound is right, but the cannibal is not." What do you want to talk about with cannibals? Which side do they have? The side that takes the cannibal exactly one, this side that needs to get a bullet in the head".

Here lies and the repetition of Armenian nationalist myths from beginning to end. At the same time, the "cannibals" Goblin calls the completely Turkish people, who suffered terrible victims at the hands of Armenian terrorists. And for an attempt to defend themselves, it turns out they should get a bullet?

The question arises: Goblin is a former “opera”. Well, he could not, while visiting Sokolov, not suspect something was amiss. He could have guessed about the corpse in the closet, feasting, and drinking with the killer. If he "did not advise" as an "intellectual" Sokolov, he will get rid of the corpse. So who is he after that? Not a cannibal?

Oh yes, the goblin divides people into "categories." For him, “drinking buddy professors,” as well as the “higher race” Armenians. Turks and provincial graduate students - this is the "lower race" they can be killed and dismembered with impunity.

The second high-profile event of the first half of November is the suppression of the illegal glorification of the Nazi executioner and the murderer Garegin Nzhdeh. On November 12, 2019, the Russian patriot, deputy of the Armavir City Council Alexey Vinogradov painted black on the image of the Nazi criminal Nzhdeh on a plaque installed near the Armenian Church in the city of Armavir in the Krasnodar Territory, which caused outrage of the Armenian nationalists and the threat addressed.

Immediately in the Russian media and social networks with the filing of the Armenian lobby, the campaign Nazi Nzhdeh “was a good one” began.

And at the same time, the Petersburg killer Oleg Sokolov - defenders immediately appeared from among the “intelligentsia”. Like the same goblin. Like “respected professor”, “cultured person”, “familiar with French politicians”. So to say the ruler of the "intellectual elite", the historical reconstructor, "Napoleonist." In addition, I am familiar with the Minister of Culture of the Russian Federation and many other representatives of the authorities and “Bohemians” in the Russian Federation.

Many of Sokolov’s defenders regret that he was not able to fully complete his plan and drown the corpse in the rivers, and now “a respected person will suffer”. A petition is gaining signatures demanding the release of the killer from prison.

In principle, Oleg Sokolov, obsessed with history and imagining himself “Napoleon,” reached the point of murder — naturally. No less history-obsessed Armenian nationalists who invent myths, believe in them, and eventually begin to kill those who, “the great ones”, supposedly interfere with their lives have taken the same path. They also praise especially “effective” killers, such as the same Garegin Nzhdeh.

Gradually, public opinion such people begin to push to the fact that if you are a representative of the "higher caste" or "higher race", then you are all allowed, including the most sophisticated crimes.

Therefore, it is logical that those who justify Oleg Sokolov usually justify another, even more, the terrible killer - the Nazi Garegin Nzhdeh. Thus, in fact, admitting to his own Nazi thinking.

It is especially strange that among the defenders of the executioner Nzhdeh there are representatives of the people who suffered the most from Nazism - Jews, such as the seemingly intellectual writer Mikhail Weller.

This writer, justifying the Nazi executioner, not only spits on the graves of more than 6 million Holocaust victims who died at the hands of such as Nzhdeh. He essentially justifies the possibility of such crimes in the future. In the name of the so-called “high idea”.

Here is an example (https://youtu.be/dbu7FJvdHYw) - Weller is asked the following question: “You comment on the installation of a monument to the Nazi criminal Generals of the Wehrmacht Garegin Nzhdeh in Yerevan on May 30, 16. And the place was chosen better than for Marshal Baghramyan. " Weller specifically responds:

“You see, Garegin Nzhdeh since the pre-revolutionary times and was a fighter for the freedom and independence of Armenia, he fought in World War I, he fought during the civil war, he meant the independence of Armenia ... He is the most perfect fighter for the freedom of Armenia. And when the Second World War broke out and the Germans went to the Caucasus, and it smelled that Turkey ... is nevertheless oriented more likely in favor of Germany. Germany kept trying to push Turkey to enter the war ... In the event that Turkey entered the war, Armenia and of course Armenia would be tidied back to us. And so, from considerations, is it possible to maneuver so that if Germany prevails, Armenia should be independent, it really began to cooperate with the Nazi regime ”.

In general, it turns out that Nzhdeh collaborated with Hitler for the "independence" of Armenia. But did Weller’s brothers and sisters, Jews, Nzhdeh also get destroyed “for the sake of Armenia’s independence”? And people of other nationalities?

Mikhail Weller unfoundedly claims that Nzhdeh had “no specific crimes”, although there are a lot of facts of the participation of the Armenian Nazi legion in caramel operations and mass killings of civilians (the same Jews).

But apparently, Mikhail Weller sees in Garegin Nzhdeh a similar-looking person of a “higher caste” who is allowed everything, for the sake of a “high idea”.

Here's what one of the Facebook users thinks about the Nazi’s reign of Nzhdeh Weller:

“A lie sounded when Weller said that Garegin Nzhdeh fought for the independence of Armenia and did not commit a crime during the First World War. He did not say anything about 50-burned Azerbaijani villages and tens of thousands of killed civilians in Zangezur by units of this “hero”. He said nothing that even a man like Trotsky condemned the disgusting act of Garegin Nzhdeh when he dressed as a woman had fun until the morning with two captured soldiers and in the morning ordered them to be shot. Probably Trotsky presented himself in the role of those captives. Weller did not say anything about the report of the Chief of Staff of the Russian Army on the South Caucasus Front, General Volkhovitinov, in the name of the tsar’s governor in Tiflis, where he requested permission to disband the Armenian units of the Russian army in connection with the mass killings of civilians by the Armenians. Volkhovitinov wrote: “Armenians avoid military operations against the regular army of the Ottomans, but civilians are being slaughtered behind our backs, which is quite loyal to us.”

Weller did not say how in March 1915 the Armenian formations of the Russian army were disbanded, of which the majority, disobeying the command of the command and deserting, began to engage in ethnic cleansing. I will not write about the crimes of Garegin Nzhdeh in the ranks of the Hitler coalition - it’s on Weller’s conscience, who stated that Garegin Nzhdeh did not commit a crime, although he was one of the leaders of the 30 thousand Armenian legion. ”

In fact, living in a society such as Weller, Goblin and Sokolov are scary. After all, they, in fact, believe that a person of "their circle" has the right to any crime. And this is nothing more than a direct path to the revival of Nazism, and in the country most affected by Nazism.