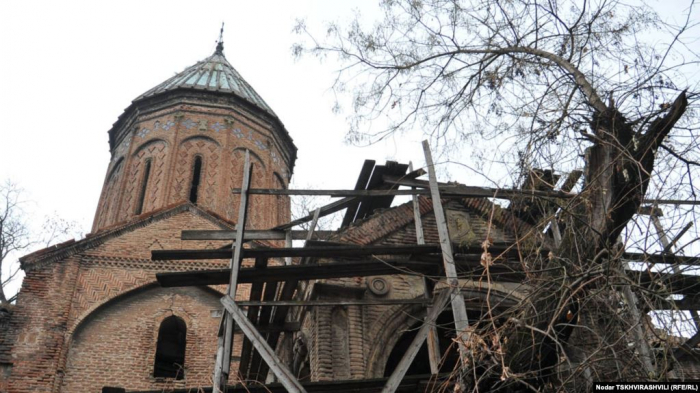 Inscription 2, made on a khachkar, says: “Surb Nshan” (Holy Cross). The name belongs to the khachkar (cross-stone) and, thus, caanot be viewed as a name of the church.

It is noteworthy that the Russian translation of the Armenian text, the word karaihat is rendered as строитель (‘builder’), while he refers to him as an architect. There is a difference between them: karaihat actually means ‘a builder’; however, it is a mistake to use it in the meaning of ‘an architect’. The Armenian for an architect is chartarapet.

S. Karapetyan believes that “architect Navasard,” mentioned in the inscription, is the architect of Kirakos Church (1655) in Khacheni, Bolnisi, and Bridzor Vank Church in the village of Shkhveri (located near Greater Shulaveri); this viewpoint has been supported by no sources.

Once again, in the 17th c., Armenians got hold of St Nikolaos the Wondermaker (Surb Nshan) Church in Tbilisi, and this is not argued by anyone’ however, no written sources or oral information exist about the Armenian provenance of this church; on the other hand, there has been a traditional view that St Nikolaos Church was Georgian earlier which is documented. We should start with Vakhushti Bagrationi who writes: “In the lower fortress, there is a domed church, and there is an empty domeless church; Armenians are in the domed one; as for the domeless one, it was constructed by Queen Mariam as a court chapel. Later, she built four domeless ones. Currently, Armenians are in possession of them.”

The noted was commented and specified by Pl. Ioseliani. Armenians got hold of seven Georgian churches in Tbilisi; of them, three churches were domes ones. “Surb Nshan, having belonged to Orthodoxy as St Nikolaos the Wondermaker,” is one of the embezzled by Armenians.

The Armenian scholar G. Aghayants justly noted: “According to the traditional information, in the site of Surb Nshan, there was the Georgian church after St Nikolaos the Wondermaker which was embezzled by Armenians constructed a new one with the same name.”

G. Aghayants’s words can be proved by “new information,” found by S. Karapetyan, telling about constructing of a church. Anyhow, in the information provided by the aforementioned authors, it is very significant that Georgian and Armenian communities of Tbilisi were aware of the fact St Nikolaos Church had been Georgian earlier.

With a view to the stated, Z. Chichinadze, chronicler of Old Tbilisi, provides an important note: “Armenians purchased a large Georgian church – St Nikolaos, located on Okromchedeli Street, and now it is called Surb Nshan.” The note emphasizes that St Nikolaos Church of Tbilisi was Georgian which was later named as Surb Nshan.

In the opinion of Prof. T. Kvirkvelia, of the most competent scholars of the history of Tbilisi, “According to notes, earlier, here (St Nikolaos Church – B. A.), there was an Orthodox church; after its deconstruction, it was restored by Armenian Gregorians… With its size and high dome, the church is distinguished in the constructions of old Tbilisi.” In a way, his statement repeats the note by G. Aghayats but it re-confirms the fact that the Georgian church after St Nikolaos was embezzled by Armenians.

S. Karapetyan refers to my standpoint about the Georgian provenance of Surb Nashan, based, on the one hand, on the aforementioned written sources and traditional notes, and, on the other, on the opinions of the Armenian scholars B. Ulumbabyan and G. Asatryan. According to these scholars, “in Armenia, it was not customary to worship this saint (St Nikolaos the Wondermaker – B. A.).” It means that the cult of St Nikolaos was not popular in Armenia and, hence, churches named after him are very infrequent. S. Karapetyans seems to view this fact as an offence to his national pride and writes in a chafed way: “Actually, a great number of churches were named after St Nikolaos in various districts…” He states this, failing to cite any additional data, and repeatedly lists the already mentioned churches. This is what evidences non-popularity of this saint in Armenia. Therefore, there are no more churches named after him than these three ones; they are: the monastery near the village of Btaryach, Kamarakap and Narevan District; the church of the village of Zamara, Yerzink District; the fresco of Dadivank Monastery, Tivrik District. The reader has to judge whether, based on this short list, one can speak about the popularity of St Nikolaos in Armenia. If he wanted to prove the opposite, he should have added other churches to the list but failed to do it. Thus, he had no grounds for that. Therefore, it is useless to talk about the multiplicity of churches after St Nikolaos in Armenia.

S. Karapetyan is ironical concerning another reference: “The view, which was beneficial and pleasant for the Orthodox Church, appeared even in official publications, that this church (St Nikolaos – B. A.), similarly to many others… in Georgia once belonged to the Orthodox church and it was named after St Nikolaos the Wondermaker.”

The reference in point has nothing to ironize. The calendar was compiled by competent secular and cleric figures who were objective which can hardly be said about S. Karapetyan.

Apparently, Armenians repeatedly re-arranged, re-adjusted and “re-built” the Georgian church after St Nikolaos the Wondermaker in Tbilisi in 1703 and later. It is no use to discuss Armenian inscriptions and references of 1703 and later telling about the restoration of the church. It seems that, here and elsewhere, “construction” is used in the meaning of “restoration, innovation” in ktitoral inscriptions, but, in the inscription of 1662, the word “shinetsav” denotes restoration and not construction.

Pl. Ioseliani’s, Z. Chichinadzr’s, G. Aghayants’s and others’ references about St Nikolaos (Surb Nshan) Church are referred to by S. Karapetyan as “fictitious,” “flam,” and confronts them with “the Armenian references” of the 17th c. I already stated and repeat once again that these references, both old and new, do not attest to the Armenian provenance of St Nikolaos Church but rather confirms that in the 17th c. Armenians somehow managed to get hold of this Georgian church.