Will “Great Armenia” be in place of Abkhazia and Sochi, and will a “corridor” be pierced through Georgia 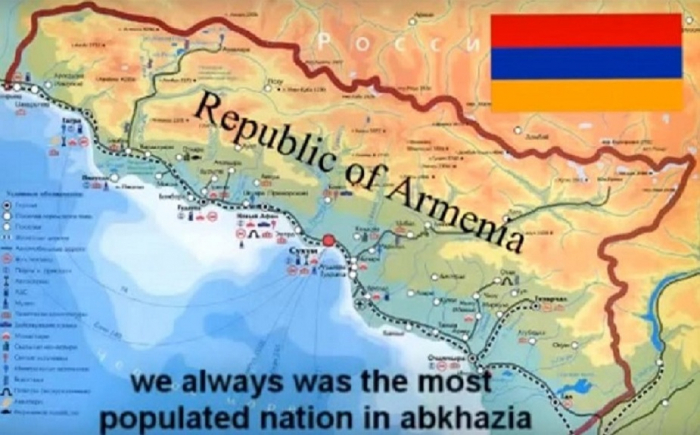 On social networks, Armenian nationalists are already in full share among themselves with plans for “access of Great Armenia to the Black Sea”. Here, for example, the reasoning of one of them:

“Norayr Grigoryan: Now our diaspora’s priority should be getting Armenian autonomy with the capital in Sochi or in Adler. In Sochi, it is preferable since then we can reunite with Abkhazia, which will be part of our structure and which we can already say that the Armenian and this entry will only consolidate everything de jure. After that, we can calmly break through the corridor through Georgia to connect with our mother Armenia. And let no one be concerned when the Circassians lived on these lands. The Armenians lived there much earlier and all these lands, as well as Dagestan and Chechnya, were part of GREAT ARMENIA. So we will only restore historical justice. Every Armenian in the Russian diaspora should work for this purpose”?

In such posts the answer to the question lies precisely: will the Armenian nationalists surrender Abkhazia to the Georgians?

The farther, the more it becomes obvious that the main acquisition of Armenian nationalists in the Caucasus is not at all occupied Azerbaijani Karabakh, but Georgian Abkhazia.

In the same Nagorno-Karabakh is leaving the Armenian population. In words, the Armenian nationalists who are very “appreciating” Karabakh are not in a hurry to settle there. Despite the fact that the authorities of the Republic of Armenia are doing everything to populate the occupied Azerbaijani territories. And this is no coincidence. Karabakh is a kind of "geopolitical impasse." It is landlocked. His communication with Armenia runs along mountain roads. There is little fertile land. Armenians do not want to live in this “hole”, and indeed actually on the front line.

A completely different matter is Georgian Abkhazia. According to its climatic conditions, this is a unique corner of the globe. With a wonderful climate. With a warm sea. In Abkhazia there are many balneological resorts and in general nature is very beautiful and attractive. With the ability to grow any subtropical crops.

Therefore, the Armenians do not think to leave Abkhazia. On the contrary, they are lobbying in every way for permission to continue the land and real estate in Abkhazia to those and their fellow tribesmen who do not yet have separatist “citizenship”. And there is no doubt that he will achieve this.

As a result, if separatist Abkhazia is allowed to buy property "not to citizens of Abkhazia" or to give separatist citizenship in a simplified manner to "Armenian brothers", with the current 120 thousand, the Armenian population of Abkhazia may well reach half a million people. And along with almost a million Armenians in the neighboring Krasnodar Territory of the Russian Federation on the Black Sea.

In the Caucasus, on the Black Sea coast, a “second Armenia” may emerge, which, as the Republic of Armenia degrades itself, has every chance of becoming a “first and foremost”. And between them, Armenian nationalists have already planned to “break through the corridor”. It is clear that for the Armenian falsifiers it will not be difficult to prove that they, in Abkhazia and the rest of Georgia, were “ancient indigenous people.”

Therefore, the Armenian lobby tried so hard to arrange transit between Abkhazia and Armenia. And there is no doubt that further efforts will be made in this direction.

What should not be expected is that the Armenian lobby will at least make some concessions to Georgia and Georgians on the Abkhaz issue. It is unlikely that at least several refugee families will be allowed to return to Sukhumi and Gagra.

Not for that, the Armenian lobby cranked up such a “combination” and seized “smart” land for itself, with the help of Russia and the fooled Abkhaz separatists. Today, in the eyes of Armenian nationalists, Abkhazia, the Black Sea coast, and the North Caucasus are thousands of times more “valuable” than Azerbaijani Karabakh captured at the same time with the help of Russia.

It is clear that for the Azerbaijanis who lost their homes, the most valuable and dear is their occupied homeland. But Armenian nationalists, even if it comes to the need for de-occupation of Karabakh, will abandon more it than Abkhazia.

Therefore, the Armenian lobby is so active and working "in the Georgian direction", forcing the Georgian government to agree "on transit issues." At the same time, supporting “warm” separatism in other regions of Georgia inhabited by Armenians, in particular in Samtskhe-Javkheti (just on the way of the future “Armenian corridor” to Abkhazia). And most importantly, they are trying in every possible way to remove from the agenda of Georgian society the issues of de-occupation of Abkhazia and the return of refugees.

For some reason, Georgian patriots have no idea how it turns out that the United States and Western "allies" do nothing at all to help Georgia restore its territorial integrity. They are at best limited to beautiful words and promises. But everything falls into place if you understand what a huge influence the Armenian lobby has in the West.

If they manically lobby for the recognition of the so-called "Armenian genocide", which in principle does not give anything in terms of the seizure of new territories by Armenian nationalists, then all the more it will lobby in every way for the preservation of the separatist status of Abkhazia, with the transfer of real power there to the hands of the Armenian community.

Unfortunately, we have to admit that with the help of the West Georgia has no special chances of returning Abkhazia. Armenian nationalists and the Armenian lobby simply will not let this booty.

Hypothetically, it is possible to return Abkhazia only if Russia wants to, having understood the fallacy of its policy in the interests of the Armenian lobby. After all, one must take into account that not only Georgians but also Russians suffered from separatism in Abkhazia. Russians are also driven out of apartments and their Abkhazia “survive”. Russian businessmen are terrorized and even killed. At the visiting Russians, Armenian hosts look at best as a source of income for their tourism business.

Today, the contours of the strategic plans of Armenian nationalists are emerging, and they are doing everything to ensure that Russia and Georgia are in hostile relations, while at the same time leading to the creation of “another Armenia” in Abkhazia and the Russian Krasnodar Territory.