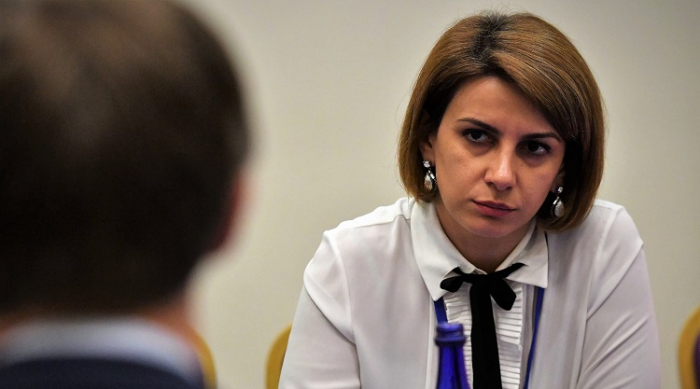 Washington Examiner publishes an article by Tamar Chugoshvili, first vice speaker of the Parliament of Georgia.

In the article under the title “What Trump would find in Georgia” the first vice speaker of the Parliament responds to Tom Rogan, the author of the article published in the same edition a week ago.

Chugoshvili says that Tom Rogan is right when he says President Trump should visit Georgia, though some of his assertions are wrong because it is based on Rogan’s discussion with an opposition politician.

“Tom Rogan is certainly correct that President Trump should visit Georgia and that he would indeed be greeted warmly. However, he would not find, as Rogan claims, that a “new sense of opportunity” exists for Russia to undermine the remarkable progress Georgia has made in recent years. This assertion is just plain wrong. It is based on Rogan’s discussion with an opposition politician whose then party was removed from office in 2012 in a seismic election, rebuking their government’s abuse of power and erosion of freedom and democracy. The same opposition was also soundly rejected again in 2016” – Tamar Chugoshvili claims in her article.

As First Deputy Speaker notes that Georgia is a strong and reform-oriented state with pro-Western aspirations. As she stresses, the opposition’s talking points that Russia is somehow making gains in Georgia in the midst of all this make no sense factually or logically.

“What Rogan misses, and what Trump would find in Georgia, is a strong, reform-minded, and growing Georgia. He would meet the resolute soldiers who have fought shoulder-to-shoulder with America in Iraq and Afghanistan. He would enjoy the excitement of Georgia’s burgeoning investment climate, its sky-high rankings on just about every global index measuring business friendliness, and democratic openness. And of course, he would embrace the beauty and hospitality of our country, which most major travel publications now list as one of the world’s most attractive destinations.

Georgia’s government has negotiated free trade agreements around the world, enjoys candidate status in NATO, and has signed an Association Agreement with the European Union. The opposition’s talking points (which haven’t changed since it lost power) that Russia is somehow making gains in Georgia in the midst of all this make no sense factually or logically.

Russia occupies 20% of Georgia’s territory, most of which it seized in 2008 when the opposition was in power. This topic is at the forefront of our discussions with our American partners. The Georgian government relentlessly sought the passage of the Georgia Support Act in the House of Representatives last week. The act prioritizes economic and security investments by the United States in Georgia.

It calls for opening discussions on a bilateral trade agreement and an assessment of threats to Georgia’s sovereignty, naming Russia specifically. We deeply appreciate the bipartisan congressional support for Georgia and the Trump administration’s strong backing. We look forward to the act’s passage in the Senate.” – The article by Tamar Chugoshvili reads.

The article of Tom Rogan was published on October 31. The author writes that he spoke with one of the leaders of “European Georgia” Giga Bokeria. As Rogan notes, While Bokeria and his colleagues are very grateful for Trump’s continuing support, they face a growing challenge from Vladimir Putin’s Russia.

“In part, this seems to be because of a renewed Russian sense of opportunity in Georgia. Orchestrated behind the scenes by billionaire Bidzina Ivanishvili, the current Georgian government has turned an increasingly blind eye to Russian aggression. Putin thus believes he can extract more from that government by increasing his own pressure”, – the article notes.