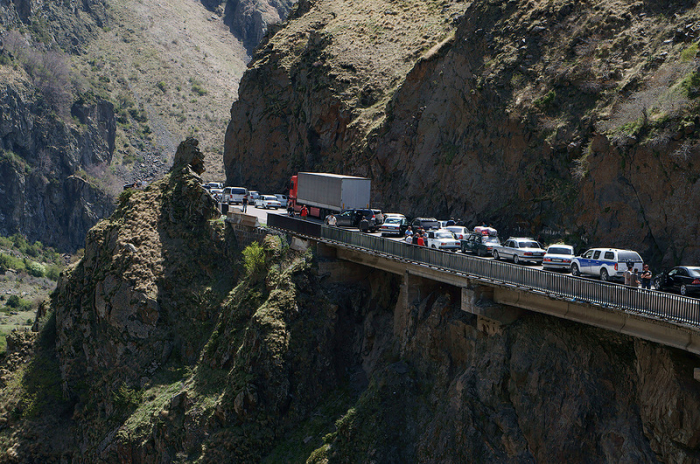 Gradually, the danger of the beginning of Georgia’s transit from Armenia through the occupied territories becomes clear. Especially in the light of the sharply aggravated situation and separatist sentiments in the Georgian province of Samtskhe-Javakheti, inhabited by Armenians, which Armenian nationalists call the "Primordially Armenian Javakhk."

The attempt of the Armenian “Javakhk” to appoint Armenian separatist Sergey Minasyan as Armenian ambassador to Georgia, the attempt by the Armenian extremists to force the Georgian cathedral in Kumurdo by force of extremists  are  only the first, but significant, stages of a big plan to destroy Georgian statehood.

The next step can be involved synchronously as the separatist regime in Tskhinvali, and the Armenian separatists in Samtskhe-Javakheti. Especially since the Armenian nationalists towards Georgia do not even intend to conceal their aggressive plans “in cooperation” with the Ossetian separatists.

These plans are partially revealed by none other than Agasi Arabjan - the leader of the extremist organization “Javahk Diaspora of Russia”. Agasi Arabjan and the so-called “Ambassador of the Republic of South Ossetia in the Russian Federation” Znaur Gassiyev were devoted to a meeting of the entire material published on the website armmuseum.ru under the eloquent headline “The dialogue between Ossetians and Armenians is being updated again.”

It is clear that this “dialogue” with the participation of an extremist Agasi Arabjan, captured by Georgian phobia, can be “actualized” only in the anti-Georgian key. Armenians have long been publishing maps of the "redistribution" of the South Caucasus, in which Georgia practically does not exist.

Moreover, Armenian nationalists have long said that there should be a direct overland communication between Armenians and “Ossetian brothers”. But just by capturing the Georgian territories, “by cutting Georgia into the living” and organizing a “corridor” this cannot be done.

The work of the Armenian lobby in the Ossetian direction has also become more active. Armenian leaders meet with the leaders of Ossetian extremists in Moscow, invite them to Yerevan and to the occupied Azerbaijan territories, are often in Tskhinvali, find a common language with them on the basis of common hatred of Georgia.

But the “memories” of Agasi Arabjan and the separatist “ambassador to the Russian Federation” about the Ossetian-Armenian “fighting brotherhood” should cause particular concern today. In particular, they recalled that on the side of the Armenian terrorists in the Karabakh struggle a whole platoon of Ossetians, consisting of 30 people, fought - and this is a serious force. Here is an excerpt from this "memory":

“Ambassador of the Republic of South Ossetia” Znaur Gassiyev, in turn, thanked Agasi Arabjan for the fact that today the dialogue between Ossetians and Armenians is again actualized. He noted that the Ossetians always remember about the "brotherly shoulder of the Armenian people." He also confirmed that Ossetians realize and share the pain of the Armenians not only in connection with the memories of the “Genocide”, but also about the Karabakh war, where Ossetians fought on the side of the Armenians as part of a whole battalion of 30 people. As the Ossetians themselves say today, it was an act of symbolic, rather than large-scale military support. At that time, the Ossetians themselves were drawn into a bloody confrontation with Georgian and Ingush nationalists.

6 fighters were awarded the honorary title “Hero of Artsakh”, 3 of them posthumously. Ossetians from among volunteers also fought in Nagorno-Karabakh. ”

The same material reports on the Ossetians who lived and partially lived in the villages of Georgia internally in the Trialeti Mountains:

“Agasi Arabian remembered the tragic episode of modern history, when the compact Ossetian population of Trialeti, living in the empty canyons on the slopes of the Trialet Range, after the attack of armed supporters of Gamsakhurdia, was forced to flee because of its physical extermination. People along the mountain paths headed south towards Javakheti, where the residents of this Armenian-populated region helped them, they took them to the Armenian city of Gyumri (Leninakan), from where they followed to Beslan. ”

Naturally does not mention that the Ossetian villages in the Trialeti Mountains began to empty during the years of Soviet power. Not because the Georgians were discriminatory, but only because the local Ossetian population, moving to the same Vladikavkaz, although the Georgian authorities did everything to ensure that the population of the Ossetian villages remained. He does not mention Agasi Arabjan that the rights to real estate and land in the villages of the Trialeti Mountains remained behind the Ossetians. They can return at any time. By the way, what the Georgians from Abkhazia and the Tskhinvali region cannot even dream of today.

Many Ossetians today arrive without problems in their abandoned villages in the summer "as if to their villas", and some are repairing or rebuilding their homes, and the Georgian authorities do not interfere with them, but on the contrary, encourage return in every way. Where is the example of the same attitude towards ethnic Georgians in separatist Abkhazia or the Tskhinvali region, or towards ethnic Azerbaijanis in the Azerbaijani villages of the Republic of Armenia and occupied Azerbaijani Karabakh, which the Armenian nationalists have cleaned of the indigenous population of the Azerbaijani villages?

Here, Agasi Arabjan speaks of allegedly Georgian persecutions of Trialetian Ossetians and that they, they say, were forced to cross the mountain passes, saving their lives to the “Javakhk” Armenians.

The memory of the Trialeti Ossetians is disturbingly different: Armenian and Ossetian nationalists do not hide their desire to create the so-called “Trialetian Ossetia”, which on the one hand will border on Javakhk, and on the other on the separatist “Republic of South Ossetia Alania”. For Georgia, it is not difficult to guess that it will almost be a deadly scenario.

In fact, in the worst-case scenario, the fate of Azerbaijan “cut to pieces” with Zangezur captured by Armenian terrorists is repeated. Indeed, at present, Nakhichevan is separated from the rest of Azerbaijan by the corridor to Iran, which had been pierced by Armenians, by the territories of the originally Azerbaijani land, Zangezur, from which the entire Azerbaijani population was expelled by Armenian nationalists.

What will it mean for Georgia: “a breakthrough of the Armenian-Ossetian corridor through Javakhk and Trialetian Ossetia?” This will mean that in some 10-20 km to the west of Tbilisi there will be a line of demarcation and this very “Trialetian Ossetia” will begin. This is at best, since the Armenians can seize Tbilisi as "their original city." But even if Tbilisi is left to the Georgians, the territories seized by Armenians will immediately begin to follow it to the south and southwest.

The Georgians can be left as a "consolation" in the east of the country a piece of land, including Tusheti, Pshav-Khevsureti and a small part of Kakheti.

The second enclave will be formed in the western Georgia, separate from the rest of the territory of Javakhk and Trialetskaya Ossetia. This enclave may include Imereti, Racha-Lechkhumi and Svaneti. It may even be deprived of access to the sea, since the Armenians claim to the whole Black Sea coast of Georgia. Especially since they already have their own enclave in Abkhazia.

Here, according to the plans of Armenian extremists, Georgia should turn into such “two isolated enclaves” if the implementation of their projects on “breaking through” transit corridors through the same occupied Tskhinvali region begins, so to speak.

Immediately behind the Armenian waggons, militant groups will arrive here, and a separatist insurgency in Samtskhe-Javakheti will be organized along with the invasion of extremists from Tskhinvali under the guise of supposedly “freedom fighters of the Triolet Ossetia”. Georgia will simply be destroyed as a state. On the other hand, the Armenians get direct “corridors” first, to the northern Caucasus, and then to the black sea.

This is what threatens Georgia in connection with the Armenian plans for transit through Abkhazia and the Tskhinvali region. At the same time, Armenian extremists do not even hide them, recalling the Trialet Ossetians and talking about the "Ossetian-Armenian fighting fraternity."