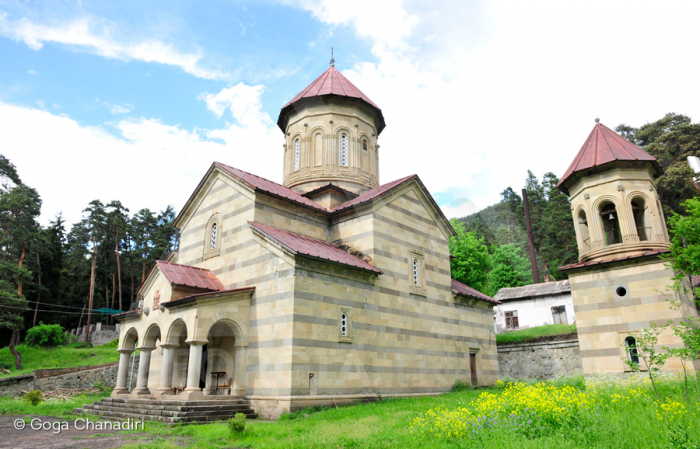 Doctor of History K. Mateosyan tries to find out why the name of the Catholic church Surb Astvatsatsin was changed and why it was called Surb Gevog. In the 15th c., the church was referred to as Surb Astvatsatsin (Armenian Testaments of the 15th c., compiled by L. Khachikyan, vol. 1. Yerevan, 1967; p. 425 [in Armenian]).

Concerning the change of name of the church, K. Mateosyan quotes the following: “Foreign invaders repeatedly destroyed this church and deprived Armenia of it. In 1671, the army of Shah Abbas invaded Georgia and took the city of Tbilisi: because this Catholic church was within a fortress, near the Narikala Citadel, he did not want to leave it to Armenians and took it completely. In that period, Armenians built another Catholic church in the city and named it Norashen because the Catholic church of Surb Gevorg was located in the square which was called Tatar Square; our Armenian women should not have walked through Turks, and, therefore, it was decided to built a Catholic church located in a true Armenian neighborhood (Ararat, No 4, 1850, pp. 52-53).

It is noteworthy information; however, its author (presumably editor Gabrial Patkanyan, also a priest of Norashen and acting supervisor of Nersesyan School) provides no written or oral sources for it.

Here, I will quote similar note about Norashen by the Georgian cleric Eg. Ioseliani: “The foundation of this church was laid by Khoja Nazra, and, upon that, it was constructed and completed owing to donations of the Tiflis belfry and women and men… in the year 1737 and later too.”

These two oral narratives complete each other because Eg. Ioseliani writes that “it was constructed and completed owing to donations of the Tfilisi belfry and women and men… in the year 1737”…

It is clear that residents of Tbilisi, women and men have collected money and constructed Norashen Church.

I cannot help commenting on Mateosyan’s following note: “Alongside with the main names, the church received additional ones owing to its location; specifically, Surb Gevorg Church of Meidani: as far as it was located in the square (Meidani) of the city founded in the medieval centuries, and still is, it was necessary to distinguish it from Surb Gevorg of Mughni, as well as from Surb Gevorg which was built nearby. Its another name “Berdi ets ekeghets” (Great Church of Fortress) was due to its location, foot of Narikala Fortress, and emerged in order to distinguish it from the smaller church of fortress, mentioned back in the 8th c., which was known as Surb Hreshtakapetats (St Archangel) or Karasanats (Holy Forty)” (Mateosyan, K. Surb Gevorg Church of Meidani in Tbilisi. 2005).

According to this passage, K. Mateosyan utterly declared the listed churches as Armenian, which, to say it mildly, is a mistake. It is a mistake because the author is not familiar with the Georgian and Russian scholarly literature abou the churches and refers only to biased Armenian works.

K. Mateosyan quotes the following from the work by Catholicos Simeon of Yerevan: “In 1765, after ousting of Persians guards from Narikala Fortress, Heraclius II returned Surb Gevorg Church of Meidani to Armenians (Catholicos Simeon of Yerevan. Jambar. Yerevan, 2003, p. 69 [in Armenian]). Similar references can be still cited; however, it will be better if the Armenian side cites a documents, reference, ktitor inscription, etc. in order to prove that it was Armenian. Following the aforementioned, he notes “Heraclius II (Irakli) Bagratuni (1744-1761), King of Kakhetieans -- 1762-1798, incumbent of the united kingdom of Kartli and Kakheti” (p. 5).

Referring to King Heraclius II as Bagratuni (the Armenian version of the Bagrationi family – B. A.) and, generally, renaming of the Georgian royal family as Bagratuni have become permanent in Armenian scholarly literature, and in their international writings. Notwithstanding the fact that Georgian historians have repeatedly proved that this claim has no historical and factual foundations, Armenian scholars keep on claiming it stubbornly.

I believe that a special monograph should be written about the issue in point and be published in Georgia, English, and Russian.

K. Mateosyan writes that Sayat-Nova was killed in front of Surb Gevorg Church during Agha Muhammad Khan Qajar’s raid in Tbilisi in 1795.

This legend is included in G. Akhverdyan’s and other authors’ writings; however, Poet-Academician G. Leonidze (“Saatlama,” 1930). Prof. L. Melikset-begi (Sayat-Nova. Biography. 1978) and other researchers proved, based on historical sources, that Sayat-Nova was not killed in 1795; he dies in an extreme old age in Akhpat Monastery in 1801.

It would not be bad if, alongside with Armenian writings, K. Mateosyan got himself familiarized with Georgian scholarly literature about Sayat-Nova, and wrote the essay following this.

“Architectural details and decorations of Surb Gevorg Church of Meidani overtly reveal features, peculiar to Georgian architecture. Currently, both in the external and internal areas of the church, there is no single detail related to the period earlier than the late medieval centuries. The plan “does not tell” anything utterly; as it is seen, it resembles Georgian kupolhalles of the 15th c.: the composition of the Great Church of Fortress Surb Gevorg might have been conceived of by either an Armenian or a Georgian architect; what can be unambiguously stated is that its common image is shaped by the Georgian architectural environment because the characteristic features, peculiar to the epoch, are overtly reflected on it.”

The opinion of the art historican N. Gengiuri should be supported as far as there ere more Georgian details than Armenian ones in the architectural ensemble of Surb Gevorg.

I think that the Armenian party should present either a deed by a Georgian king or a historical source on the permission of construction of Surb Gevorg Church of Meidani. Unless such a document is submitted, the issue of its handing over should not be stated.