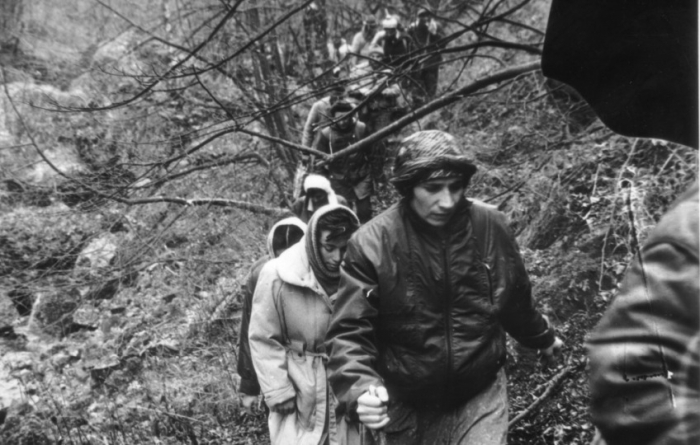 If you listen to the Ossetian nationalists, then by the degree of "long-suffering"  Ossetian people can only be compared with the Armenians. It turns out that for centuries Georgians "subjected the Ossetians to genocide." Moreover, it was so “cruel” that they settled on the best Georgian lands: in Shida Kartli, the Borzhomi gorge, in Trialeti, in Kakheti on the fertile lands of the Alazani Valley, in Tbilisi. Truly a "terrible genocide"!

And the most “final act of genocide” was in August 2008 when “unfortunate” but terribly “freedom-loving” Ossetians with the help of the Russian army wiped out the Georgian villages of the Liakhvi Gorge, and so far Georgian refugees cannot return to even the ashes of their homes.

At the same time, for centuries Georgian kings and princes took the Ossetians under their protection, helped them in the famine years, turned a blind eye at the Ossetians' inclination to steal. And so, such a "gratitude"!

But Ossetian nationalists, by the way, have the audacity to declare an "attempt at genocide" (albeit this time by the Ingush) to commit their atrocities in the Prigorodny district of the North Ossetian Republic of the Russian Federation in the fall of 1992, when Ossetian militants committed mass slaughter of the Ingush peaceful population. Until now, the descriptions of the horrors of those days run cold in their veins, it is impossible to believe that people are capable of such rigidity.

In 1992, Ingushetia was covered by the  bloody autumn. It was another great misfortune for the Ingush people, who in 1944 had already survived the mass deportation tragedy after which the Ingush lands were absolutely illegally transferred to the North Ossetian Autonomous Soviet Socialist Republic. All attempts of the Ingush people to achieve justice and to restore the rights to their ancestral territories came to naught. But the Ossetian nationalists, taking advantage of the corruption of the Russian political leadership and the fact that they had already formed illegal gangs of militants that had been tested in Georgia in the Tskhinvali region, methodically prepared for massacres and ethnic cleansing of the Ingush population.

And on October 30, 1992, at 23 o'clock in the morning, harassments of Ossetian military formations  began, shelling of Ingush settlements, which later turned into a large-scale military operation with the participation of the Russian Interior Troops in support of the Ossetian side and ended after 5 days with ethnic cleansing of the Ingush population of the Prigorodny district and Vladikavkaz. Further, continuous horrors began - hundreds of hostages of all ages, concentration camps, hundreds of dead, hundreds of missing people of different ages and sexes, ashes instead of villages and 70 thousand expelled from their homes...

All 13 villages of the Prigorodny District, where the Ingush lived, were completely devastated. 376 people were killed, 191 were missing. About 60,000 people became refugees. 3842 households were destroyed and looted. On the same days, the Ingush were massively taken hostage, rape and murder of women, children and the elderly with particular cruelty.

Until now, more than 40,000 people cannot return to their homes.

The criminal case on the events that took place in 1992 was closed ...

The brutality of the Ossetian militants was so immence that in Russia they still do not believe that the Ossetian people, whom the Russians “protected and saved,” were capable of such.

However - there‘s nothing to be surprised. For centuries, the Ossetians were considered among the freedom-loving and militant Ingush people to be cowardly and despised. Their Ingush tolerated it only because the Ossetians enjoyed the “patronage” of stronger “masters”: first, the Kabardian princes and the Georgian kings, and then the Russian administration.

As is always the case in history - there is nothing more terrible than a former slave who, even for a moment, will gain power over the former master, before whom for centuries he trembled and humiliated. In the same way, Armenians were humiliated and humiliated for centuries before the Turks, Azeris and Georgians — and when the moment came — they showed their “nobility” in all their glory with the help of Russians (in Eastern Turkey, Zangezur, Karabakh, Abkhazia).

Ossetian nationalists, like the Armenian, are brave only when they feel behind them a “big Russian bear”. Moreover, they committed their atrocities in such a way that the Russians, who were their eyewitnesses, were simply shocked.

In fact, the Russians themselves must be careful with such "long-suffering peoples." During the “sharp turns of history,” the peoples who were humiliated for centuries and with the help of the Russians gained “dignity” at the first opportunity turn into an animal grin towards their benefactors.

It seems that Russians have not been taught anything for the experience of the “Red Latvian Riflemen”, who during the civil war of 1918-1922. committed unthinkable atrocities against the Russian population.

For centuries, the position of the Latvians as the same Armenians or Ossetians was humiliated. In Dostoevsky there is an expression: “rather, he will go to the Negroes to the planter or to the Latvians to The Baltic Germans (Deutsch-Balten)”, i.e. the position of Latvians was not very different from the position of black slaves in America during the years of slavery.

The Russians "regretted" the "unfortunate Latvians" and during the First World War formed groups of Latvian riflemen and as a "counterweight" against their oppressors - the Germans (similarly, groups of Armenian Dashnaks were formed against the Turks).

"Thanked" Latvians Russian terribly. Most of the bloody Bolshevik terror when thousands of Russian people were exterminated were on the conscience of the “red Latvian riflemen” who, having fulfilled their bloody mission, most of them calmly returned to “bourgeois” Latvia (by then local Latvian nationalists thoroughly “cleared out from the German population).

Even now, undisguised discrimination is being carried out in relation to the Russian population in Latvia, despite the fact that Latvia is a member of the EU and is literally forced to observe at least the appearance of “European equality”.

But those areas of Russia where Ossetians and Armenians live are not going to accept in the EU. So, as if the Russians themselves do not feel the full "gratitude" of these "long-suffering" peoples.