Armavir: is “friendship” between the Russian people and Armenian Nazi executioners possible 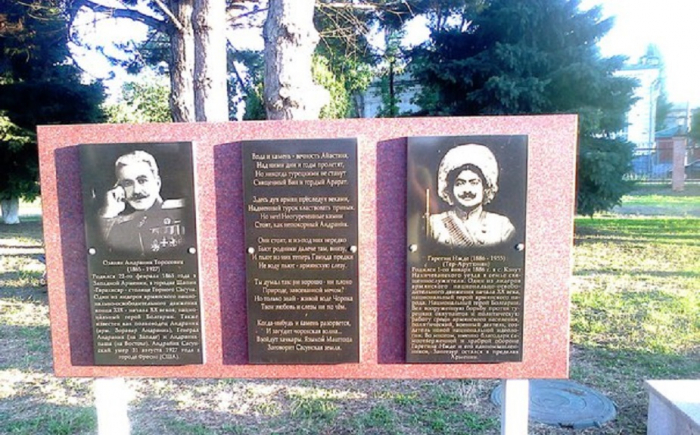 In the city of Armavir (Krasnodar Territory, RF), despite numerous protests by citizens, they could not get rid of the memorial plaque glorifying the Nazi executioner Garegin Nzhdeh.

Recall that under pressure from the indignant public at a meeting of the Armavir City Council held on October 29, 2019, deputy Alexei Vinogradov introduced a draft decision on the inadmissibility of perpetuating the memory of Garegin Ter-Harutyunyan (Nzhdeh) and dismantling the memorial plaque.

The draft decision was brought to the attention of all current deputies of the City Duma. And the fact that in a country affected by Nazism the veneration of Nazi executioners was unacceptable was obvious.

But, nevertheless, the decision of the Armavir City Council on the dismantling of the memorial plaque Nzhdeh was postponed. Apparently under pressure from the powerful Armenian lobby. And this most likely means that the glorification of the fascist monsters only on the grounds that they are “heroes” for the Armenian nationalists will continue.

Moreover, on November 4, in addition to the memorial plaque glorifying the Armenian Nazi executioner Nzhdeh, as if to mock his victims (among whom were thousands of Russian people) in the same Armavir should solemnly open a sculpture dedicated to the "friendship of the Armenian and Russian peoples."

The new sculpture is located in the park on Efremova Street, at the intersection with Michurin.

“The Unity of the Spirit composition is made of white-gray granite. These are two women in traditional attire - Russian and Armenian. They stand under a cross, a symbol of the Christian faith of peoples, their heads bowed, and read the Bible, ”said Grigory Karapetyan, chairman of the local branch of the All-Russian organization of the Union of Armenians of Russia in Armavir, told the Kuban News.

He added that the sculpture will become a symbol of unity and centuries-old bonds of friendship, uniting the Russian and Armenian peoples.

The author is a member of the Union of Armenian Sculptors Smbat Shahinyan.

It is reported that guests from "friendly countries and cities" will take part in the grand opening ceremony, which will take place on November 4 at 2 p.m. And most likely - a delegation from separatist Abkhazia, where admirers of Garegin Nzhdeh, Armenian militants from the Baghramyan battalion organized mass killings and genocide of the same Christian people as Russians - Georgians, as a result of which now the Armenians make up the majority on this Georgian land, capturing the houses and apartments of those killed or expelled Georgians.

The “reading” of the Bible did not prevent the Armenian militants from killing their neighbors Georgians. And it is unlikely that it will hurt to do this in Armavir in relation to the Russians. Moreover, even today Armenian nationalists like to talk to the public about the “friendship of the Georgian and Armenian peoples,” while glorifying the killers of Georgians in Abkhazia.

A memorial plaque with the glorification of the killer of the Russian civilian population during the Great Patriotic War - Garegin Nzhdeh flaunts next to the monument "friendship of the Armenian and Russian peoples." This is an eerie symbolism, saying that the crimes of Armenian nationalists against Russians in the future are more than possible.