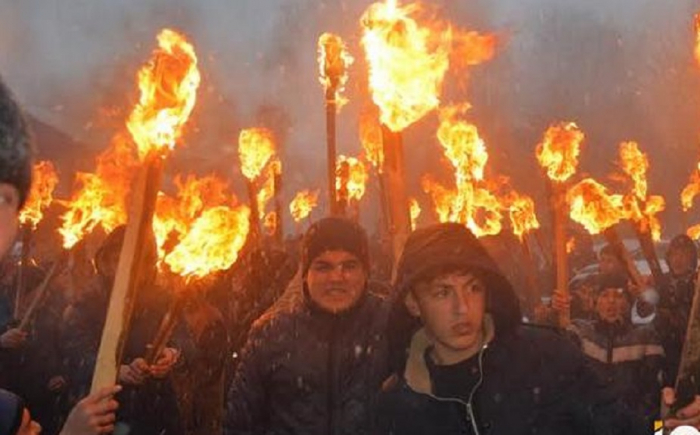 The resolution of the House of Representatives of the US Congress on the recognition of the mythical so-called Armenian genocide will have consequences not only for Turkey, but also extremely painful negative consequences for many other countries. Including Georgia.

In fact, the United States showed that they have “favorites” in the South Caucasus, who are allowed to do everything - occupation of foreign territories, genocide and ethnic cleansing, and even formal “alliance” with Russia. Georgians are not allowed anything, even to live in their native land, which (in Abkhazia) was in fact appropriated by Armenian nationalists. And while Georgia must supply the United States "cannon fodder" and the Georgians must die in Afghanistan.

All Georgia’s attempts to get from its seemingly “allies and partners” —the United States at least some real deoccupation of Abkhazia and the Tskhinvali region and did not lead to anything other than talk. The issue of Georgian refugees from Abkhazia, as well as the responsibility of the same “long-suffering” Armenian militants for the genocide of Georgian civilians in Abkhazia, has not been resolved.

At the same time, Armenian militants from the battalion named after Baghramyan can easily travel to the United States and have a nice chat with the powerful Armenian diaspora there. And the “allied” supposedly US Georgians do not even have the right to visit their ancestral homes and graves.

And it seems that the “Armenian-loving” politicians in the USA do not intend to heed Georgia’s pleas for help in restoring territorial integrity. It came to the point that retired NATO officials, obviously in agreement with the United States, began to mockingly offer Georgia membership in NATO without Abkhazia, and so called "South Ossetia."

But the Republic of Armenia, in fact, received from the United States it was so long sought. By a resolution of Congress, the leading superpower confirmed the main Armenian myth, which justifies the Armenian aggression against neighboring peoples and the claims of Armenian nationalists on foreign lands.

US recognition of the mythical Armenian “genocide” does not bode well for Georgia. The already arrogant towards the Georgia Armenian nationalists will begin their pressure with renewed vigor.

Almost inevitably, separatist sentiments will grow in the Samtskhe-Dzhevakheti region, which is supposedly inhabited by "descendants of the victims of genocide." There will be pressure from the Armenian lobby on Georgia and in other areas. In particular, they will put pressure on the Georgian Orthodox Church.

Recall that now the United States together with the Vatican demands from the GOC its “liberalization”, submission to Greek nationalists from the Patriarchate of Constantinople and uncanonical recognition of the so-called “Orthodox Church of Ukraine” under the rule of the same Greek Patriarchate of Constantinople, which most Ukrainian believers simply ignore. And Armenian nationalists, for their part, will demand that 465 or even more Georgian churches be transferred to them. Under the “joint pressure” of the USA, the Vatican, Greek and Armenian nationalists, the Georgian Orthodox Church will be difficult to resist.

In such a situation in Georgia, the main thing is not to succumb to the almost inevitable pressure of the Armenian lobby demanding to recognize the Armenian mythical "genocide". At the same time, there is no doubt that now, in their pressure, the Armenian nationalists will "set an example" not Russia (where the Armenian lobby, contrary to the interests of the country, forced to recognize the "genocide"), but the United States. Like, “your faithful ally” recognized the “genocide”, so the Georgians should also recognize it “in solidarity with the United States and the“ Armenian brothers ”. Without the restoration of territorial integrity, the return of refugees and the punishment of Armenian criminals guilty of genocide of the Georgian population of Abkhazia.

They will also demand a break in relations with Turkey and Azerbaijan, which are vital for Georgia. Provocations on Armenian “genocide” days are possible. From the point of view of Georgian security, the situation after the irresponsible decision of the US House of Representatives on the mythical "Armenian genocide" has deteriorated sharply.