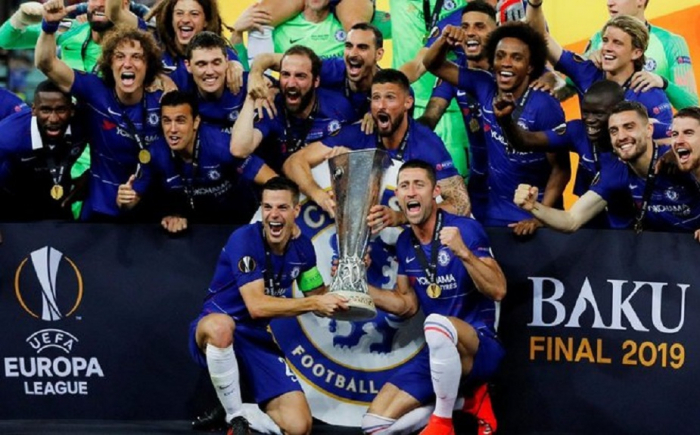 Sport, and especially football for the countries of the South Caucasus, for Georgia, Azerbaijan and Armenia has always been of great importance. In Georgia, many people remember the “sidereal time” of Dinamo Tbilisi, especially when the team became the USSR Champion and won the Cup Winners' Cup. However, separatism and the related wars and conflicts led to the fact that the countries of the South Caucasus for a long time became “sports and football peripherals”.

But it could not go on forever. And the first to make a breakthrough on the world sports level is Azerbaijan.

The beginning of this breakthrough was the first in the history of the European Games, which were held in Baku in June 2015. Then in 2017, the IV Islamic Solidarity Games were held in Baku.

And now, on May 29, 2019, Baku became the European football capital - the final match of the UEFA Europa League 2018-2019 was held in the city between the British teams Chelsea and Arsenal. Chelsea 4-1 won this tense and interesting match.

Skeptics predicted that Baku was “not used” for European fans. At the same time, in terms of the number of fans - 51,370 people - the UEFA Cup final in Baku became the third in history, slightly yielding to last year’s record-breaking number of fans (55,768) in the French final in Lyon. Even the Russian media were forced to admit: The final in Baku was one hundred percent successful and entered the history of football.

On the eve of the match, some media tried to blow up the scale of the “scandal” the refusal of the Arsenal player Heinrich Mkhitaryan to go to Baku allegedly “for security reasons”. But this is his personal decision. Such a demarche he only harmed himself and his team, and the football holiday in Baku was a success in spite of everything. And the same Arsenal also had chances to win - after all, the first half ended in a draw.

The breakthrough of Azerbaijan as a country where international sports competitions are organized at the highest-level benefits all countries in the region. He gives hope that Georgia will soon become a desirable place for holding such competitions too.

Unfortunately, one of the countries of the South Caucasus, namely the Republic of Armenia, with its aggressive policy towards its neighbors and support of separatism, stands out from the general positive trends in the development of sports and tourism in the region. Although he is also trying to “stir up” his separatist pseudo- “sports” pseudo- “competitions”. In them, destructive policies and the propaganda of separatism are much more than sports.

But here the invaders and aggressors do not expect anything except marginal isolation and the shame of those who made a bet on separatism and the occupation of foreign territories.

Everything is relative. Almost immediately after the holiday of football in Baku, the Armenian invaders in June 2019 organize the separatist "European Championship" of the so-called separatist Confederation of Independent Football Associations (ConIFA) in the occupied Azerbaijani Khankendi. And even before the start of this “event”, there were already a lot of scandals here.

At the same time, no one guarantees the safety of separatist football players and “fans”. The leaders of the "Artsakh" separatists themselves are seriously worried about the safety of their heads. The relations between Armenian Prime Minister Nikol Pashinyan and the separatist head of the so-called “NKR” or “Artsakh” Bako Sahakyan have sharply deteriorated recently. One of Pashinyan’s supporters, Jivan Abrahamyan, at a rally in Yerevan, even threatened that he would “crush Bako Sahakyan’s head”.

Such threats can be carried out at any time. And not only in relation to the leaders of the separatists, but also to all those who fall "on a hot hand," including participants or fans of the separatist "championship." For the separatists and occupiers, such methods of “showdown” are a familiar thing. But, of course, it is incompatible with sports.

The separatism and aggression of the same Armenia against Azerbaijan, the support of separatists by the Yerevan regime in Abkhazia and the Tskhinvali region of Georgia create tensions in the South Caucasus, harm the states of the region. Including Armenia itself, which is turning into an absolutely wild mono-ethnic deadlock, with the dominance of neo-Nazi ideology and enmity with its neighbors. Naturally, all this hinders the development of tourism and sports in the region.