The plans for the inclusion of Abkhazia in Russia became known ... Are the plans armenian? 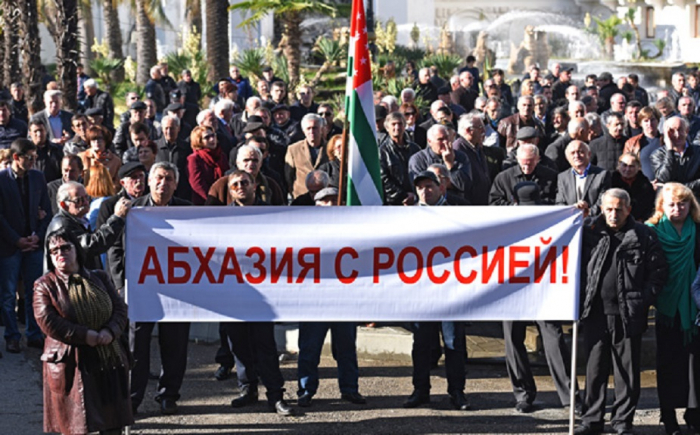 Public opinion is gradually beginning to prepare for the complete elimination of the so-called "independence" of the separatist Abkhazia and its direct incorporation into Russia. Who is the ultimate author of these plans can be easily guessed.

The powerful Armenian lobby actually "took over" the economy of the Krasnodar Territory of the Russian Federation and occupied Georgian Abkhazia. And it is not at all averse to unite its “possessions” in order to strengthen its positions here and there.

True, in Abkhazia, Armenian nationalists have to “play independence” to rule through separatist puppets and “share” with the finally degraded Abkhaz officials who are capable of nothing except looting, extortion and bribery. But these games are already annoying the Armenian masters of Abkhazia. Therefore, material appeared on the site abhazium.ru under a lot of talking title: "Plans for the inclusion of Abkhazia in Russia have become known" (https://abhazium.ru/news/1301-stali-izvestny-plany-vklyucheniya-abhazii-v- sostav-rossii.html) as "probing the soil" for the implementation of such plans. We give it in full:

“Sochi is the only city in the largest country in the world where there is no winter, so every year there are more and more people who want to buy a house by the warm sea. The land in Sochi is just becoming golden, and only very wealthy citizens can afford good land.

Recently, there has been talk of a long-term lease of part of the territory of Abkhazia, or maybe the whole? and joining the Krasnodar Territory. This is naturally not a fact, but there is no smoke without fire .. Perhaps these rumors crept on the eve of the presidential election in Abkhazia, but since people say it means someone is discussing it.

There are a lot of advantages from this deal.

The climate of Abkhazia is even milder than in Sochi, and the resorts were considered the most prestigious in the USSR, every Soviet citizen dreamed of relaxing in Gagra or Pitsunda.

In Abkhazia, there are farmlands on which tropical fruits, such as tangerines or kiwi, which are not found in Russia, grow.

Because Sochi has actually become the third capital of Russia, where Putin meets with leaders of other states, all kinds of summits and major events, it is necessary to move the state border from such a strategically important city.

This will give a powerful charge of patriotism, comparable to the accession of Crimea to the Russian Federation.

But one should not forget the economic benefits, this is a new construction boom, will be able to cool slightly the overheated real estate market of Sochi.

But there are also disadvantages to this. The already strained relations with Georgia will worsen.

Most likely, this deal will not go unnoticed by our “partners” from Europe and America, and new sanctions will follow.

Almost the entire population of Abkhazia is armed, and disarmament will entail a surge of protests and conflicts, which are extremely dangerous in this region.

To restore the infrastructure of the leased territories will require resources comparable to the costs of joining the Crimea.

Lease of land is still not inclusion, but a milder way of developing new territories. Nothing will change on political maps, only the region’s economy will change. Moreover, almost all Abkhazians are Russian citizens, and the whole republic actually sits on subsidies from the Russian budget. ”End of article.

The most important phrase in this article is: "Almost the entire population of Abkhazia is armed, and disarmament will entail a surge of protests and conflicts." This is nothing but a “subtle hint” of the forthcoming direct genocide of the Abkhaz ethnic group. Abkhazians will be "disarmed" and liquidated. Just like the Armenian militants from the Bagrayamn battalion “disarmed” the unarmed civilian Georgian population.

It is clear that now the Abkhaz separatists will begin to resent. But who will hear them if it comes to “implementing plans”? The “indignation” of the separatists, in which case, will help the Abkhaz ethnic group no more than the bleating of the mountain goats listed in the Red Book, which they recently ate at an Abkhaz wedding in the Ochamchire district.