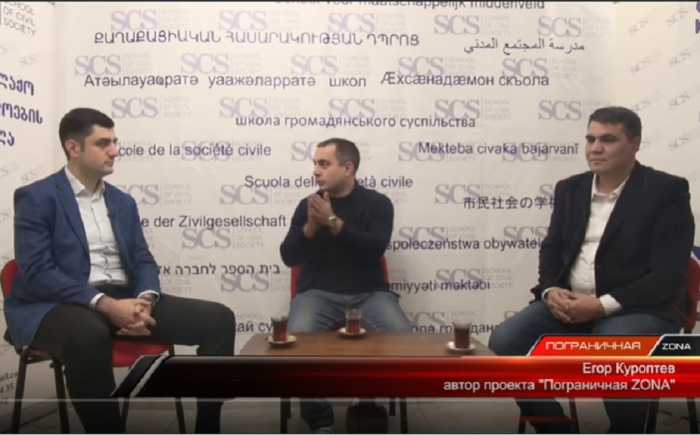 Recently, in the program “Frontier Zone”, the presenter Yegor Kuroptev invited representatives of the Azerbaijani (Ramin Bayramov) and Armenian (Giorgi Tumasyan) communities in Georgia to discuss urgent problems of both Georgia and the South Caucasus region (https://youtu.be/zcQg4pMrwVg).

At the same time, everyone understands that the main problem of the region is separatism and the main separatist project, from which everything began, was and remains Nagorno-Karabakh. If the Armenian nationalists didn’t begin the seizure of Nagorno-Karabakh and attempts to secede from Azerbaijan, more than two million people who wander today as refugees and internally displaced persons would live in their homes and apartments.

And who will return tens of thousands of brutally murdered civilians: Azerbaijanis in Karabakh and Georgians in Abkhazia? Any sane person, especially a citizen of Georgia and a patriot of his country, understands that Armenian separatism in Azerbaijani Karabakh, its occupation by Armenia and genocide of civilians on a national basis by separatists and occupiers are an absolute evil. This is an infection, which then, with the help of the same Armenian nationalists, spread to Georgian lands.

If it weren’t for this evil, Abkhazia would be a prosperous part of Georgia, Abkhazians and Georgians would live peacefully and build a joint state.

You also need to understand that the Armenian nationalists not only ignited the Karabakh conflict. They played a decisive role in the genocide of the Georgian population of Abkhazia, especially the Baghramyan battalion and other Armenian formations that fought on the side of the separatists. At the same time, the Georgian people did not and do not show any negative attitude towards other Armenians who lived and live in the rest of Georgia.

Moreover, the Armenians in the unoccupied territory of Georgia maintain relations with the Armenians of Abkhazia, and even visit them. And this despite the fact that these Abkhaz Armenians killed the Georgians and seized the housing of Georgian refugees as trophies. And the same militant from the “Javakhk” Armenians, Mikhail Avagyan, did not start his separatist “career” in Abkhazia by accident.

Moreover, even if you do not touch on the identity of Mikhail Avagyan, the question arises: at least one representative of the Armenian community of Georgia apologized to Georgian refugees from Abkhazia for crimes of Armenian militants from the same Baghramyan battalion? Is Giorgi Tumasyan ready to apologize to these people, many of whom have lost relatives and friends from the hands of his fellow tribesmen? Has anyone heard the words of condemnation and apology for what Baghramyan’s battalion was doing in Abkhazia - this question has already been addressed to the Georgian public!

Alas, there are no signs that such an apology will yet. Giorgi Tumasyan continues to “glorify” separatism. He announced not less than the same seizure of Azerbaijani Karabakh by Armenian nationalists - the condition "that the Armenian statehood take place." Here are the words of Giorgi Tumasyan in this regard:

From Tumasyan’s words it follows that since the Armenians are “affected” by the “genocide” (really mythical) people, the capture of foreign lands, in this case Karabakh and the genocide of the indigenous civilians, is important to preserve their culture and statehood. It turns out that as “victims of the genocide”, Armenian nationalists seized Georgian houses in Abkhazia in order to preserve their “culture”, expelling and destroying the Georgian population.

What kind of "culture" is this and what kind of "statehood" is such for which it is necessary to kill the innocent women, old people and children and arrange ethnic cleansing?

At the same time, of course, Giorgi Tumasyan did not touch upon the issue of Georgian refugees and their return to their native places. Although at one time he was appointed to a high position as the representative of the youth of Georgia at the UN. In this regard, “Caucasus Plus” has already asked Giorgi Tumasyan and other representatives of Armenian organizations the question: “Why are the Armenian human rights organizations of Georgia silent when Armenia votes in the UN against the return of Georgian refugees, although Georgia has appointed an Armenian representative of its youth to the UN? "(Http://kavkazplus.com/news.php?id=14744#.XayKKFUzbIU). Alas, this question remained unanswered.

But the publication "Caucasus Plus", consistently adhering to a patriotic and statist position, defending the territorial integrity of Georgia and the interests of the Georgian people, first of all Georgian refugees, Giorgi Tumasyan is very unhappy.

But after all, not a single Armenian site and not a single Armenian media over the past three decades have given a single material condemning separatism, not one requiring the restoration of the territorial integrity of Georgia, not one (!) Requiring the return of Georgian refugees and even sympathizing with them. The Armenian media have “activity” in one direction - in inflating wild Georgianophobia, in supporting separatism, in claims to the Georgian national heritage, Georgian lands and Georgian shrines.