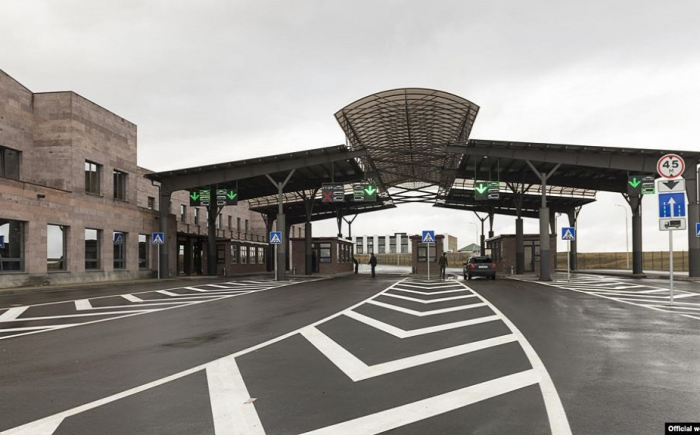 To begin with, in Georgia there is a territory where Armenians are free to come, even from the Republic of Armenia, even from Russia, and to do whatever they want, but where more than 300 thousand Georgian refugees still cannot return to their homes. These are separatist Abkhazia and the Tskhinvali region. Moreover, in Abkhazia, the Armenian militants during the 1992-1993 war seized the houses and apartments of the Georgians, killing or expelling their owners and are now “doing business” making good money during the holiday season.

Find over the many years since the 1992-1993 war. there is at least one story in the Armenian media and in the archives of Armenian television channels where Armenian journalists are outraged that ethnic Georgians, primarily refugees, are not allowed into Abkhazia or the Tskhinvali region. There is not such plot!

Find at least one indignation of Armenian journalists of inhuman abuse of the Georgians of the Gali district, deprivation of all their human rights, abductions and torture, murders of Georgians on the demarcation line? There is no such thing either!

But there is a glorification of the "freedom-loving" Abkhazian and Ossetian separatists and their "heroism" during ethnic cleansing and genocide of the Georgian population. The “brotherhood of freedom-loving peoples” of Abkhazia, the so-called. "South Ossetia" and the so-called "Artsakh".

Moreover, Armenian journalists today are doing everything to create another separatist territory in Georgia - Samtskhe-Javakheti, or as the Armenian nationalists call it “the original Armenian“ Javakhk ”. There is not a single story of Armenian journalists about this Georgian land, where there would be a positive address to the Georgian state and Georgian people. There is not a single plot that is respectful of the Georgian Orthodox Church - on the contrary, Armenian claims to Georgian churches are constantly emphasized (officially Armenian nationalists claim 465 Georgian churches).

But it is strongly emphasized that the Samtskhe-Javakheti region is “Armenian” and clearly public opinion both in Armenia and among the “Javakhk” Armenians is specially pushing for the realization of the Karabakh scenario with a separatist rebellion and mass genocide and expulsion of the native Georgian population.

Moreover, the experience of the genocide of the peaceful Georgian population was already with the Armenian militants of the battalion named after Baghramyan and other separatist groups in Abkhazia. And they have “heroes” - a monument to the separatist militant Mikhail Avagyan was already erected at the confluence of Armenian journalists in Javakheti.

Thus, we are dealing not so much with “journalists” as with provocateurs working for Armenian special services to the detriment of Georgia’s interests.

Therefore, the Georgian authorities had long time to put an end to provocative voyages propagandizing the separatism of Armenian journalists on their territory. Almost all of their stories have signs of flagrant violation of the laws of Georgia from this point of view. And now, finally, the first steps in this direction have begun to be taken.

On October 11, 2019, at the Bavra-Ninotsminda checkpoint, the Georgian Border Control Service forbade the entry of three Armenian journalists traveling to Georgia in fact to prepare stories for separatism propaganda in the Samtskhe-Javakheti region.

After the journalists-provocateurs Yuri Manvelyan, Tigran Khachatryan and Tigran Hakobyan from the Armenian news agency “Epress” were not allowed to cross the border, they immediately started screaming to the whole world about the “violation” of their rights.

Here, for example, eloquent material on the Echo of the Caucasus website under the heading “Yuri Manvelyan:“ We are very sensitive to closed borders ”(https://www.ekhokavkaza.com/a/30214522.html).

“I live in a country with a large part of the border closed. In general, our region is very rich in closed and militarized borders, and, yes, my colleagues and I are very sensitive to any prohibitions, ”said Yuri Manvelyan.

It is interesting, as Yuri Manvelyan thinks, 300 thousand Georgian refugees are not “sensitive” to the administrative border of separatist Abkhazia that is tightly closed for them. Whereas in their homes are the “sensitive” Armenian nationalists who expelled them, killing their near and dear ones?

And the borders of Armenia are closed, is it because the Armenian nationalists expelled from their homes more than 1 million Azerbaijanis from occupied Karabakh and more than 200 thousand from the Republic of Armenia itself and do not even allow people to visit the graves of their fathers and grandfathers?

Yuri Manvelyan is indignant: “Yes, without explanation, that is we were just verbally told that it’s impossible: “you can’t go to Georgia”, “you can’t carry this.” Then we were told that if we leave it on the Armenian side, they will let us in. We were already waiting in Akhaltsikhe. We were late, we phoned, and we were told that we would find cameras on the spot, and if we need any other equipment, in general, we will record all these interviews on the spot. We told the border guards that a month and a half ago, literally at the end of August, we arrived in almost the same composition, with the same equipment, across the same border, and they let us in. They told us that the situation has changed. What the situation has changed is unclear, but they required accreditation from us. Why this accreditation, which authority issues this accreditation, was not explained to us. We were told we need permission to interview. We explained that we are not going to cover any special events, we are doing interviews with people who have already given their consent, these are private individuals, and we will not attend any special facilities that require accreditation. But it had no effect. We were told: "Leave the equipment and come back." We left the equipment, returned, and we were already more emotionally and rudely told that “you did not understand that you were not allowed into Georgia? You will not go to Georgia. ”

Indeed, there is hope that the situation has changed and Georgia is beginning to defend its interests and really struggle with the propaganda of separatism and with the provocateurs inciting separatism.