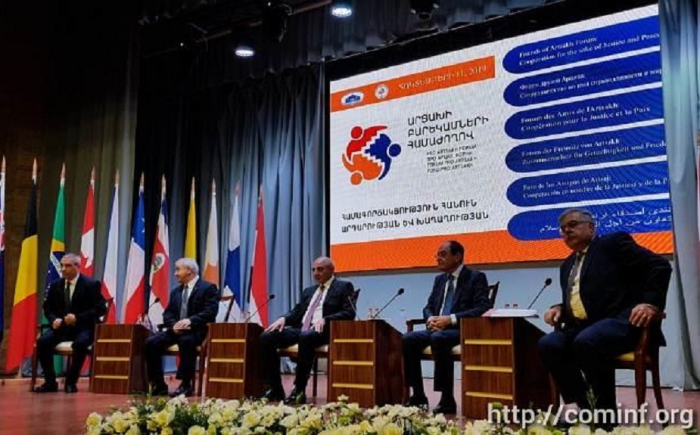 The Republic of Armenia continues the policy of supporting separatism and ethnic cleansing and occupation of Georgian territory hostile towards Georgia. That is how the illegal presence of the delegation of separatists from Abkhazia and the Tskhinvali region on the territory of Azerbaijan occupied by Armenian troops in Khankendi should be regarded.

It is clear that separatist delegations from Tskhivali and Sukhumi could not enter the territory of occupied Azerbaijani Karabakh through Yerevan. There is another hostile gesture of Armenia towards the neighboring state - Georgia, on which the existence of Armenia actually depends today, since Georgia is in fact the only "window to the outside world" for it.

Separatists in the Azerbaijani-occupied Khankendi occupied by Armenia took part in the “Forum of Friends of “Artsakh ”under the mocking title“ Cooperation for Justice and Peace ”. It turns out from the point of view of Abkhazian and Ossetian separatists and Armenian nationalists that “justice” is the expulsion from their homes of more than 1 million Azerbaijanis of Karabakh, 300 thousand Georgians of Abkhazia and several tens of thousands of Georgians from the Tskhinvali region. Well, the “peace” in the view of the separatists is the occupation of foreign territories and ethnic cleansing.

Representatives of the “Armenian Diaspora of Tskhinvali”, members of the “Artsakh Friends Club” Cicero Hakhanov and Nonna Mkrtchyan also participated in the forum on the part of the Tskhinvali separatists. Nonna Mkrtchyan, welcoming the participants of the forum on behalf of the “Armenian Diaspora of Tskhinvali”, noted the importance of holding such events to strengthen ties between the separatist “Artsakh” and his friends, and also presented the organizers of the event with the painting “The Karabakh Madonna” by the Tskhinvali artist Valery Avagimov.

There was also a well-known Georgian phobian Konstantin Zatulin at the forum in occupied Khankendi, who in his speech emphasized the presence of Dmitry Medoev, a functionary from the Tskhinvali separatist, at the forum:

“Russia pursues an independent policy. Despite all the threats and sanctions, we recognized the self-determination of Abkhazia and South Ossetia - I see here in the front row our good friend Dmitry Medoev, Minister of Foreign Affairs of the Republic of South Ossetia - we supported the return of the Republic of Crimea to its native harbor, we are involved in efforts to pacify the civil war in the East of Ukraine, because we cannot allow further violence against our compatriots in the land of Donbass. I am sure that the Russian Federation as a state will not allow an unjust solution to the Karabakh conflict. The Russian people first of all value conscience and justice. And they are on your side. ” - said Zatulin.

In essence, Konstantin Zatulin confirmed with his statement that, unfortunately, Russia cannot pursue an “independent” policy, and Armenian nationalists are pushing it to the detriment of Russian interests. In terms of “conscience and justice,” Zatulin essentially raised slander against the Russian people.

The Russian people, unfortunately, are deceived by the Armenian lobby and by such traitors as Konstantin Zatulin. He simply does not have complete information about the monstrous atrocities committed by Armenian nationalists in Karabakh and Abkhazia. Propaganda, which is in the hands of Armenian nationalists in the Russian Federation, such as Margarita Simonyan, systematically deceives the Russian people. Although it is obvious to any sane person who escapes from the captivity of pro-Armenian propaganda that supporting separatism and redrawing borders will sooner or later hit Russia’s enormous one.

In fact, the Russian state is being destroyed just like Konstantin Zatulin and the Armenian nationalist Sergey Lavrov-Kalantarov. They “tried” to surround Russia with a dense ring of enemies, they quarreled Russians with Georgians, people historically close to Russia, they brought matters to war with fraternal Ukraine, they bleed Russia’s budget by supporting separatists whose hands were covered in the blood of civilians. This is all a betrayal of Russia and the Russian people.

Zatulin’s performance in occupied Khankendi can also be considered a model of mockery of historical truth. In particular, he turned to the Armenians, saying: “When your ancestors erected monasteries in Gandzasar, Dadivanka or Amaras in ancient times, which became monuments of Armenian and world cultural heritage, it never occurred to anyone to prove that this land belongs to the people who live on it.”

We remind Mr. Zatulin that when monasteries were erected in Karabakh in Gandzasar, Dadivank and Amaras, not a single Armenian was here. Here lived Albanian Christians who built these temples.

The insidious seizure of control over the autocephalous Albanian church by Armenian heretics far from Christianity from Echmiadzin was accompanied by attempts to completely Armenize the Albanian population. This, in turn, led to the mass Islamization of the majority of the Karabakh Albanians who had not reconciled with the Armenian spiritual oppression. It was these Albanians who eventually became part of a single Azerbaijani people. Today, the descendants of the monastery builders Gandzasar and Dadivank are expelled from their native land; they cannot even visit the cemeteries where their ancestors are buried. But the occupied Azerbaijani lands are illegally visited by puppets of Armenian nationalists, all sorts of Zatulins, Medoevs and others.