Martin Armenian is an ominous figure for Russia. Why do Armenian “historians” “refuse” him? 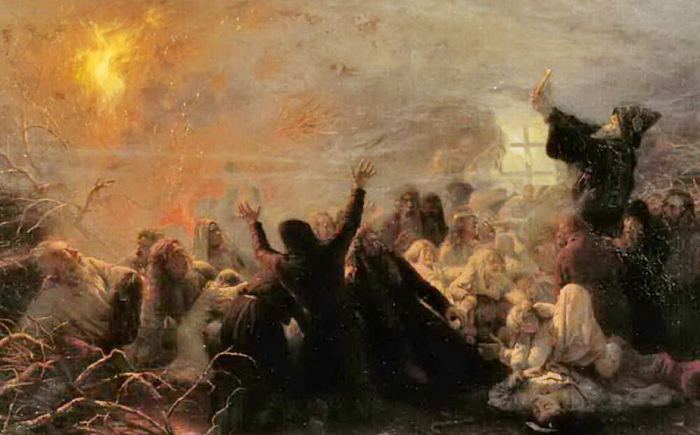 Armenian falsifiers, attributing to the "great Armenians" various figures of the past - from the Georgian poet Shota Rustaveli to the Byzantine emperors, for some reason they "do not recognize" one real figure of Armenian origin of the 12th century. Moreover, they peremptorily declare that "this Armenian was not there."

We are talking about the heretic Martin the Armenian, who lived in the 12th century, but who, as a result, became the main culprit of the split in the Russian Orthodox Church in the 17th century.

Now in the Russian Federation in schools and universities are taught that the so-called "old rite" in Russia, they say, arose "by itself." Say, Russia was far from Byzantium, and "differences" with the "pan-Orthodox" rite "accumulated." The one that was adopted among the Orthodox Ottoman Empire, in Ukraine and Georgia. And the attempt of Patriarch Nikon to “unify” church rites and led to a split.

But after all, someone had to teach the Russians a ritual distorted and departing from pan-Orthodox norms?! Indeed, it is impossible to introduce the rite by itself.

And the name of this man who “laid the time bomb” under the Russian Orthodox Church is Martin Armenian.

It is possible to understand why the Old Believers deny the historicity of Martin the Armenian. They claim that their rite "has always existed." Although it is the result of the treachery of the Armenian heretic adventurer.

But why are the Armenian “historians” themselves denying the historicity of Martin the Armenian? Apparently, because then they will have to admit that there is Armenian fault in the disasters that have befallen Russia as a result of the church schism.

The schismatic Old Believers, being Russian by blood, for centuries have been one of the main internal enemies of the Russian state. Riots of Stepan Razin (who also raided Azerbaijan according to the Armenian "tip") and Emelyan Pugachev on their conscience.

The dissenters were very cruel to their opponents. But dissenters and especially in relation to themselves differed in especially wild antics.

What are the so-called "burns" or self-immolations of dissenters. Old Believers whole villages locked themselves in specially constructed large wooden houses, where it was impossible to get out, and burned themselves alive with the children. "Spiritual leaders" - the initiators of such "burns" agitated people to burn themselves because "the Antichrist came", then left unscathed through only the underground passages known to them in order to burn new villages.

There was no "sense in such massacres of people." Some Orthodox historians rightly believe that the Old Believers, the so-called "spiritual leaders" who persisted in the heresy of Martin the Armenian, were actually engaged in satanic sacrifices and had nothing to do with Christianity.

Putting out the "burn" was almost impossible. Soldiers of government troops, who pulled burned people out of the flame, saved only small parts of the unfortunates.

The “mentors” and “spiritual leaders” of the Old Believers from the so-called “Pomeranian consent” were especially distinguished by such savage mass burnings of people. It was in their midst that the Pomeranian Answers were compiled; where they did their utmost to “prove” that the information about Martin the Armenian was “fake”.

We can say these are the “answers” of maniac killers who burned people alive. But these "answers" are perceived as "the ultimate truth" by Armenian "historians". And they say “there was no Martin Armenian, Dmitry Rostovsky invented all this!”

Also surprising is the “mutual understanding” between Armenian nationalists on the one hand and many Russian sectarians and Old Believers. Both of them hate the Russian Orthodox Church. They also hate Georgians and Ukrainians - Orthodox peoples, among whom there are no Old Believers.

Dashnaks and extremists from Old Believer often entered into situational unions. During the revolutions of 1905-1907 and 1917, many Old Believers financed the terrorists, who acted in conjunction with the Dashnaks.

And in the post-revolutionary bacchanalia between the Dashnaks and Russian Old Believers and sectarians there was often a “touching” unity. For example, both of them jointly carried out the genocide of the Talysh population in the Mugan steppe and Lankaran.

The figure of Martin the Armenian explains a lot in the history of Russia. In particular, why there were so many “patrons” of the Armenian migrants among the Russians.

The information about Martin the Armenian on the basis of real historical documents came to us thanks to one of the greatest Russian writers and the holy Russian Orthodox Church, Metropolitan Dmitry Rostovsky (originally from the Ukrainian Cossacks, worldly name - Danila Savvich Tuptalo). Moreover, in the days of memory of Dmitry Rostov in all the churches, Akathist is served in him, in which there are such words (in Church Slavonic):

“The storm of heresies, from the underworld through Aria in Greece, was revived, in the last summer by Martin Armenian through Bryn herders in the Fatherland, brought the silence of the One, Holy, Cathedral and Apostolic Church to destruction.”

The meaning is as follows: through the Old Believers, the destructive heresies were brought to Russia through the machinations of Martin the Armenian. Dmitry Rostovsky fought with them.

The question is who to believe:

• To the Metropolitan Dmitry of Rostov, the most honest and educated person, an ascetic who used only reliable sources in his writings.

• Or Armenian falsifiers, whose lies were discovered more than once?

And also to their “friends” - the Old Believers, the fanatics of the “Pomeranian Accord”, who burned people alive, who in their “Pomor Answers” slandered Dmitry Rostovsky, accusing him of “writing a fake” about Martin Armenian”.

So, what is known about Martin the Armenian thanks to Dmitry Rostovsky.

According to the essay “The Conciliation Act on the Heretic Armenin, on the monk Martin” in Kiev under the Grand Duke Rostislav Mstislavovich, the Church Council was convened because Martin the Armenian, who called himself “Greek” and a relative of the Patriarch of Constantinople Luke Chryzerover, began to disseminate his teaching.

The teachings of Martin the Armenian partly formed the basis of the errors of the Old Believers, and also included Armenian, Catholic and Jewish positions. In Kiev and on the territory of Ukraine, those heresies that Martin the Armenian brought with him were easily disposed of. But the fragmentation of Russia led to the fact that in the territories where the Moscow state was then formed, the heresies of Martin Armenian were included in the rite.

The attempt of Patriarch Nikon to get rid of the heresy of Martin the Armenian and come to a unified rite for all the Orthodox people caused sharp resistance from part of the "armenian" clergy, which ultimately led to a church schism.

And it turns out that the main culprit of all the horrors of schism that fell upon the Russian people was, in the end, Martin the Armenian, whom the Armenian historians, referring to the monsters from the "Pomeranian consent", for some reason do not want to recognize the "great Armenian".