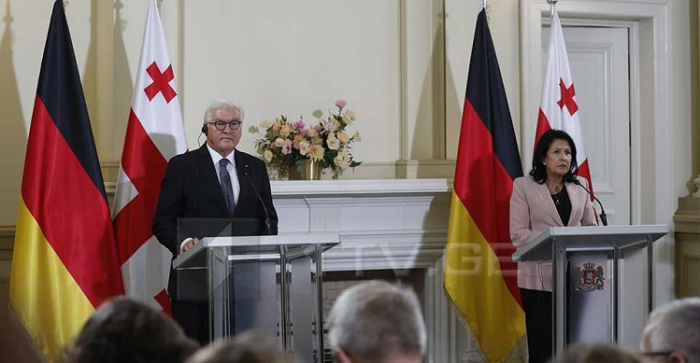 Georgian President Salome Zurabishvili has met with her German counterpart Frank-Walter Steinmeier, who has paid his first visit to Georgia in the role, arriving in Tbilisi with his wife late yesterday.

After an official reception at the Atoneli Presidential Palace and a face-to-face meeting earlier today Zurabishvili said that conflict issues were on top of the agenda.

The complicated situation that arose in the summer in our occupied regions may transform into more serious tension at anytime. We need to ease tension on the one hand and to find outcomes to resolve conflicts on the other,” Zurabishvili said.

She stated than one of the options which may help ease the ongoing tension is an increase in the number of European Union Monitoring mission (EUMM) personnel.

Steinmeier said that Georgia is becoming “increasingly popular” among German tourists, with German magazines frequently writing about Georgian regions like Svaneti and Kakheti.

Zurabishvili stated that an official dinner with Steinmeier will take place in the Kakheti region of Georgia, with the aim of promoting the Georgian regions.

It should become a tradition to host foreign guests at an official dinner in the Georgian regions, not in the capital Tbilisi,” Zurabishvili said.