Georgian Churches in Georgia and in Armenia - Pat VII 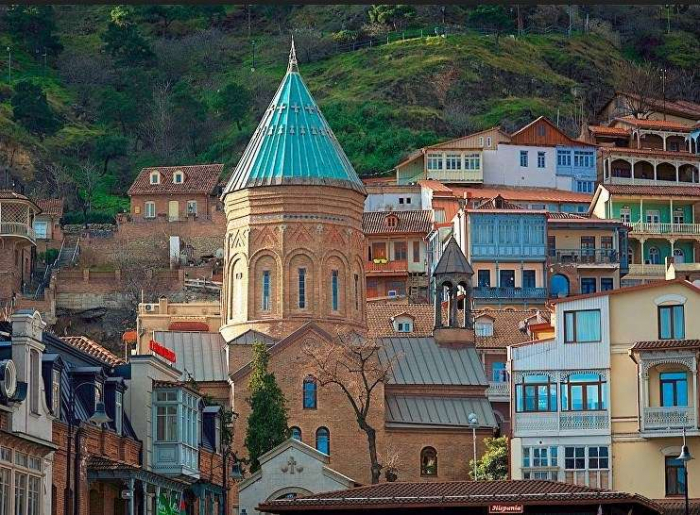 On the So Called Disputed Churches in Tbilisi

If not Tbilisi, there might be standing a mosque instead of a church in Vienna,
as for centuries Jalal Ad-Dins, Genghiz Khans
and other Eastern Sultans and Shahs
were crashed exactly on Tbilisi citadel.
Tbilisi stood as European fortress
from where enemies of the whole Christianity
could only reach Europe
weakened and emptied from blood.
Hugo Huppert
Famous Austrian poet and translator of The Night in the Panther’s Skin

Nothing has been exaggerated in these words. They objectively describe the significance and role of Tbilisi in the history of Europe. There hardly is another capital which has suffered from so many raids from enemies as Tbilisi did. It was thanks to Georgian kings that, as soon as the country recovered from aggressors, they used to restore destroyed churches and monasteries both in Tbilisi and throughout the country. Meanwhile, they constructed new cult facilities as well. It is true that we lost some them owing to both external and internal enemies; however, rather a lot have been retained. It goes without saying that they must be taken care of. There are advances with this respect. “International Foundation of Construction of Georgian Churches and Monasteries, Study of Cultural Heritage and Land Bank” was established recently. The Foundation developed a series “Fate of Tbilisi Churches.”

The wealthy Armenian Umek os said to have built Surb Astvatsatsin – Surb Gevorg (1251). This has allegedly been communicated by the inscription on the western wall of the church; the inscription has not rached our days. One of the issues (No 4, 1850; p. 51) of the magazine Ararat (Tbilisi) tells about the inscription. It published the essay “Description of the City of Tbilisi.” Gabriel Patkanyan (1802-1889), editor of the magazine, has been assumed to be its author. The essay tells the following: first, it was a Catholic church; second, its constructor was Prince Umek; third, the church was built in 700; in Armenian, 700 corresponds to to the year 1251.

This is how the author-editor seems to have rendered the content of the old Armenian inscription.

We should ask a question: Is the content of the inscription rendered accurately? Is not it biased?... There is an interesting point; as Academician J. Orbeli writes, “but that inscription was apparently damaged maliciously. There is a new inscription on the same wall towards the lower side of the door, saying that the church was built in 80 (2); and, in order to confirm the latter date and present the church as older, that incomparable artifact was erased.”

The old Armenian inscription was erased and a new one was made; why? “in order to present the church as older” (Orbeli, J. ibid.; p. 218).

It is somehow obvious that the old Armenian inscription was destroyed and a new one was made. In the new Armenian inscription, the date of construction of Surb Astvatsatsin – Surb Gevorg Church – 700 was substituted by 80; as a result of the manipulation, instead of the earlier 1251, there is 80+551=631, that is, someone presented Surb Gevorg Church as 6 centuries older!..

P. Muradyan provides the following explanation of the manipulation: it is an incorrect reading of the old Armenian inscription – the Armenian characters, corresponding to the numerals 700 and 80, were confused to their resemblance; as a result, instead of 1251, we received a new date (631).

Naturally enough, a question arises: What the old Armenian inscription was erased for? Could not old Armenian masters tell the characters apart?

I believe that the manipulation was deliberate wishing to present Surb Gevorg old than it was.[1] I also do not rule out that the old Armenian inscription contained a hint that earlier Surb Gevorg Church was Georgia…

In 1910, in the eastern inside part of the church wall, Academician J. Orbeli discovered a stele with an Arabic inscription: “God bless Muharem, 1294.” In J. Orbeli’s opinion, the Arabic inscription on the wall of the Christian cult monument “was of obviously Armenian origin and was made in the Armenian (if not geographic then topographic) environment…” Despite of his investigations, J. Orbeli was unable to establish links between Muharem and the Umek family or why the inscription, and the Arabic one, was made on the wall of Surb Gevorg (Selected Works, vol. 1. Yerevan, 1963; pp. 217-22 [in Russian]).

In my opinion, the inscription was not made in the wall of Surb Gevorg as far as it cannot be viewed as a source to claim that the church is Armenian; moreover, there is nothing to attest that initially Surb Gevorg Church was Armenian.

The next information about Surb Gevorg has been provided by the Armenian archimandrite Hovhannes Yerznkatsi (Pluz) who, in the big city Tiflis back in 1284, made a speech about motion of planets at the court of the glorious church. He stated that the church was built by Umek.

As already noted, initially Surb Gevorg was a Georgian church. Apparently, there was some hint in the old Armenian inscription about its being Georgian, and, that was why it was destroyed and a new inscription was made. G. Aghayants believed that in 1251 Umek did not construct Surb Gevorg, rather he built it over an old one, thus making it Armenian. That happened under the domination of Mongols. Hence, Yerznkatsi’s information contains nothing new.