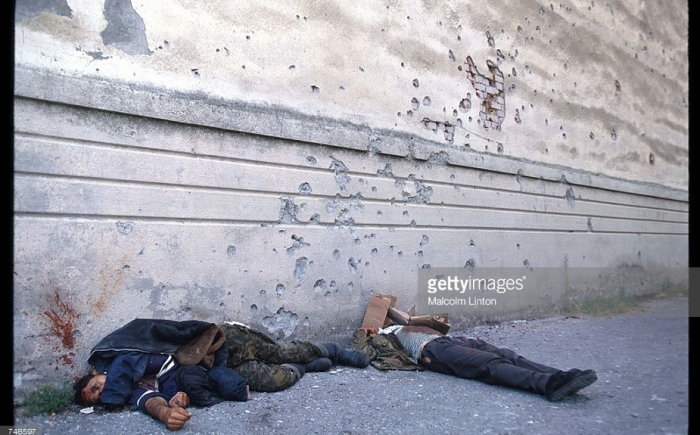 September 30 in separatist Abkhazia celebrates the so-called "Day of Victory in the Patriotic War of the People of Abkhazia 1992-93." On this day, the separatist formations and regular units of the Russian army reached the Inguri River.

And at the same time, a terrible thing happened in the Sukhumi captured by separatists, North Caucasian mercenaries and Armenian militants - the massacres of Georgian civilians. Those who did not manage to escape from the city or did not want to do so hoping for the "humanity" of the separatists. Alas, all these people were killed in the most brutal way. Moreover, the killers did not even particularly hide what they were killing defenseless people for. They “liked” their houses and apartments. Thus, they behaved worse than the Nazis in the occupied territories, although they killed people, but not in order to move into their homes and apartments themselves.

The atrocious crimes of the separatists, including the militants of the Bagramyan battalion in those days, today are recognized even by those who fully support the Abkhaz separatist project, although they are trying to separate the "bad" separatists from the "good" ones. So, for example, journalist Anton Krivenyuk, who moved from the separatist "paradise" to Russia, published a post on his Facebook page about the "September 30 holiday" or the separatist "Victory Day." In it, congratulating and completely justifying the separatists, he nonetheless writes:

“And in those days another terrible thing happened. Offspring of the human race, where people could have been killed just like that.
There were many, those who killed people took them at home.
Acknowledgment of this, it is in order to scrap his children from this hellish curse.

You cannot say hello, look into the eyes of killers. Their family is dying. Better step back a little. You cannot cover their lifetime hell with any cloaks. ”

Recall that this is not written by a refugee, but by a singer of Abkhazian separatism, who recently sang “heroes”. Which at the same time turned out to be killers and looters.

“But all the same, the first were people who fought for freedom from abomination. We won.
We will make life honest, human, kind.
September 30 is a celebration of good and honest people. ”

In general, Mr. Krivenyuk with “kind and honest people” turned down. Then it must be recalled that "the soldiers of the Wehrmacht did not participate in the killings of civilians." They, as “good and honest people,” fought, while behind their backs they killed defenseless civilians. And so they are also responsible for the Nazi atrocities. And after the war, the Allies reminded the Germans that they were also responsible for the Auschwitz crematorium, although not to the same extent as the direct killers.

Among the "fighters for Abkhaz independence," perhaps there was not a single family that would not have captured the "trophy." Even without killing anyone.

However, now the separatists and their "lawyers" want to distance themselves from some of their "comrades-in-arms": killers and looters. Cramming himself up as “good and honest people,” who, although they were militants and separatists, they would not have directly stained themselves as murders of peaceful Georgians.

At the same time, the separatists and murderers themselves justify themselves by the fact that they killed Georgians on the principle of "collective responsibility." Like, "you supported the" aggression ", so we will also kill" in revenge "all Georgians."

The fact that now some of the separatists are trying to get away from the principle of "collective responsibility" in relation to themselves is a sure sign that they are beginning to fear. For having to answer for crimes.

Abkhazian separatists who fought with Georgia but did not stain themselves in the blood of civilians can certainly count on forgiveness and amnesty. Moreover, many of them are beginning to realize how separatist propaganda deceived them at one time.

But the killers of defenseless people must be held accountable. Especially if they killed to take possession of someone else's housing. Moreover, the names of these killers in Abkhazia are well known. The honest Abkhazians themselves must do everything so that when the rule of law is restored in Abkhazia, these criminals will not evade responsibility. After all, in the end, they are dangerous for the Abkhaz themselves and for their children.