How separatism leads to the destruction of the Abkhaz people 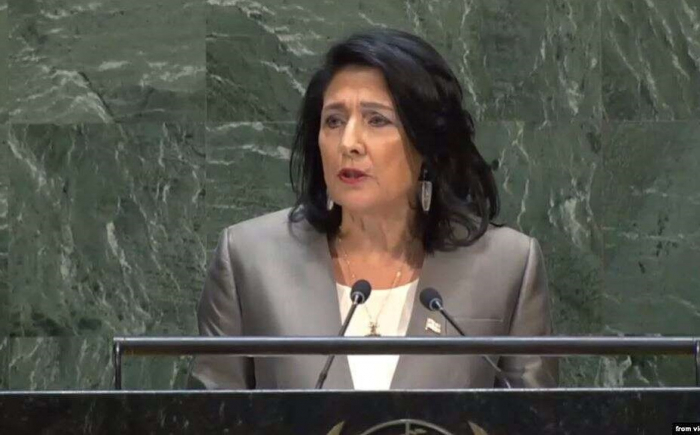 Speaking at the 74th session of the UN General Assembly, Georgian President Salome Zurabishvili emphasized that not only Georgians suffer from the occupation of 20% of Georgian territories and separatism in Abkhazia and the Tskhinvali region:

“I must declare and thereby warn the world: in occupied Abkhazia, not only Georgian, but also the Abkhaz language, which is recognized by the Constitution of Georgia and which I protect as president of Georgia, under the threat of extinction, the Abkhaz people are experiencing a sharp demographic decline. And I warn you: a world without the Abkhaz language, identity and traditions will suffer an irreparable loss”.

Thus, for the first time from the UN rostrum, Salome Zurabishvili voiced a threat to the Abkhaz people, namely, the threat of their imminent disappearance.

It should be noted that the extermination of Abkhazians as a people was deliberately carried out from the very beginning of the separatist war of 1992-1993. Ardzinba and other separatist leaders recruited all young Abkhazians, including high school students, most of whom had no training and who had not served in the army before and did not even really know how to handle weapons, not to mention other military skills.

These young Abkhazians were "stupidly" sent "for slaughter." They were forced to openly attack the positions of the Georgian army, they were specially thrown into a completely "shooting" area. There was no sense in their death from a military point of view. In reality, the forces of the regular Russian army, Armenian militants and North Caucasian mercenaries carried out military operations.

For example, the separatists themselves sing about the “exploits of young Abkhaz suicide bombers,” who were thrown under bullets to capture a bridge across the Gumista River near the village of Shroma. Most of them died on this bridge or near it. Speaking of "heroism", or rather the senseless death of these young Abkhazians, separatist "historians" emphasize that this attack was a "distracting maneuver”.

But neither the Armenian battalion, nor the mercenaries were thrown into this “distracting maneuver”. They threw young Abkhazians, yesterday's schoolchildren, most of whom only picked up a machine gun and had no military training. They were specifically sent "to a frontal attack" under the bullets knowing that they were "guaranteed to be mowed".

And so it happened. And only then the militants of the battalion named after them walked over the corpses of the senselessly lost young Abkhazians Baghramyan, who captured the main "booty".

Already during the 1993-1994 war, the separatist leaders led by Ardzinba and their “curators” from among the Armenian nationalists did everything to kill not only as many Georgians as possible, but also as many young Abkhazians as possible, to drive a wedge of hostility forever, so that "maximally cleanse" the lands of Abkhazia from the indigenous population.

The second stage of the genocide of the Abkhazian people was the encouragement of their resettlement in cities in “captured” houses with the complete desolation of Abkhazian villages and the complete degradation of the traditional rural way of life. As a result, the traditions of the people, carefully preserved when Abkhazia was part of Georgia, were broken as well as the connection between generations. Families of “captured houses” broke up, young Abkhazians simply were not taught to work themselves.

And why if there are "ready-made trophies"? This terribly corrupted the Abkhazian people and as a result of which its degradation and degeneration became.

The economy of Abkhazia found herself completely in the hands of Armenian nationalists. It is impossible for Abkhazians to find a normal job, the Armenian "owners" simply do not hire them, preferring either tribesmen or visiting Tajiks and Uzbeks. As a result, many Abkhaz families are deprived of the opportunity to earn an honest living. As a result, young Abkhazians go into the criminal environment.

Also, for the extermination of the Abkhazian people by the Armenian nationalists, drugs are deliberately distributed, on which almost the majority of young Abkhazians are "addicted". Moreover, the corrupt separatist police are practically not fighting the drug mafia, and the main drug distributors are avoiding punishment.

If you do not end the separatist regime, then the linguistic and demographic situation in Abkhazia will simply be incorrigible for Abkhazians. The young generation of Abkhazians will simply die out and degrade, the remaining ones will completely forget their native language and it will be impossible to revive the people even with all their will.