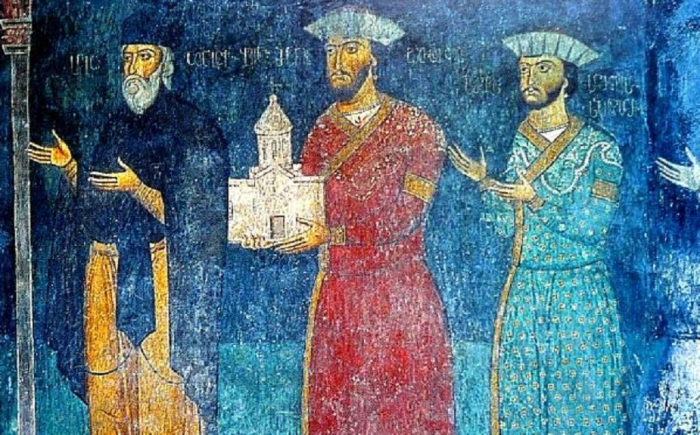 The fact that Armenian nationalists have long claimed the Georgian region of Samtskhe-Javakheti is no secret. Although Armenian immigrants appeared here only in 1830. After these lands became part of the Russian Empire, and most of the Georgian Muslim population was expelled to Turkey.

There are no facts that can prove the historical presence of Armenians in Samtskhe-Javakheti before 1830. Only Georgian churches, Georgian fortresses and other Georgian cultural monuments are located here.

Nevertheless, Armenian nationalists do not abandon attempts to “scientifically” prove their claims to the Georgian lands of Samtskhe-Javkheti and try to brazenly appropriate the history of the Georgian state of Samtskhe Saatabago. They now no more no less claim that the Atabeks of the Jakeli clan were “Armenians”.

Here is what one of the Armenian nationalists, Harutyun Harutyunyan, writes about this:

“Even after the fall of the Armenian kingdom in 1045, the Armenians continued to strive to create statehood or autonomy or a minimum of politics. Such an example could be Cilicia, which from the principality has become a full-fledged state. This is in many ways a unique case, since one of the definitions of the state is the impossibility of moving state institutions from one place to another. After the fall of Cilicia, the Armenians did not leave a desire to form at least a semblance of state. These were the Armenian principality of Zakaryan, the melikom of Khamsa, Zeytun. But one more thing, we often forget the Samtskhe saatabago. Javakhk, which is the ancient Armenian Gavar, after the fall of the Armenian kingdom, was subordinated to the Georgian. At the same time, its Armenian population contributed to the emergence of ‘autonomy. As a result, Ishkhan Tmkaberda Sarkis Jakhetsi in 1266 founded an independent principality within the framework of initially Javakhk and Tashir. At the same time, the boundaries of Atabekism at a certain time reached Karin. Atabecism lasted until 1535, until it was subordinated to the Ottoman Empire. Thus, those regions that were cut off from their homeland sought to create an independent statehood”.

However, this could not be by definition. Firstly, Georgia was an Orthodox state, and the person of the Armenian-Gregorian religion simply could not occupy high posts at court by definition. Especially such as Atabek (and the Jakelis became hereditary Atabeks back in the days of the united Georgian kingdom).

The very fact that in fact the second person in the united Georgian state had the Turkic title of atabek speaks, first of all, of the enormous role of the Turks in the formation of Georgian statehood. The Atabeks were largely subordinate to the Kypchak Turks, who were called to Georgia by King David Agmanashitabeli and who were settled in southern Georgia, including in Kvemo Kartli and Samtskhe Javakheti. David Agmanashitabeli himself became related with the Kypchak Turks, taking the Kypchak Princess Gurandukht, who became the Queen of Georgia, as his wife.

Queen Gurandukht and her descendants did a lot for the Georgian Orthodox Church and the formation of Georgian statehood. At the same time, a significant part of the Kypchaks, having adopted Orthodoxy, mixed with the Georgian population. Some of them retained their Turkic self-identity and Azerbaijanians-Borschalins and partially Meskhetians, an ethnic community of mixed Turkic-Georgian origin, came from them.

For a long time after the collapse of the unified Georgian kingdom, Samtskhe Saatabago was the largest Georgian state formation in the territory and reached the outskirts of the city of Erzurum. But the Armenian population was not there at all. Turks and Georgians lived here.

After joining the Ottoman Empire, the Islamization of the indigenous population of Samtskhe Saatabago began and at the same time a significant part of the Turks merged with the Turkish people. However, Muslim Georgians retained their language and traditions. Proof of this is the population of mountainous Adjara, as well as numerous Georgian villages that remained on Turkish territory in the historical regions of Shavsheti and Klarjeti.

Not only in Georgian Javakheti there are no “ancient” Armenian churches of 1830 - and in Turkish territory, which was previously part of Samtskhe Saatabago, there is not a single Armenian church or Armenian architectural monument. Today, the Turkish government is rebuilding Georgian churches and monasteries, carefully examining the preserved inscriptions and frescoes, but there is nothing Armenian in sight, since Armenian falsifiers did not get to these monuments.

At the same time, there remained a region that historically belonged to Samtskhe Saatabago and completely preserved the original population, since after entering the Russian Empire it was unattractive for Armenian immigrants due to low land - this is mountainous Adjara: Khulo, Shuakhevi and Keda districts. If Samtskhe Saatabago, as Harutyun Harutyunyan writes, was an “Armenian state”, then there would be traces of the Armenian presence in the mountainous Adjara. But there are none at all. This is a purely Georgian region.

There are no traces of at least some Armenian influence and the Armenian presence dating back to 1830 in Samtskhe-Javkheti. The tomb of Atabek Jakeli, for example, was the Sapara monastery located near Akhaltsikhe. But there is nothing Armenian in sight. There is not a single inscription in the Armenian language; there is not even a hint that the Jakelis were “Armenians of Jakhetsi”.

Of course, if Armenian falsifiers could capture the same Sapara monastery (as they recently tried to capture the Georgian temple of Kumurdo), then they would very quickly drag their khachkars and slabs with recently embossed “ancient inscriptions”. But so far, thanks to the vigilance of the Georgian patriots and the Georgian Orthodox Church, such large-scale falsifications cannot be organized.

Harutyun Harutyunyan and similar “historians” have to appropriate the Atabeks Jakeli with blatant arrogance. Compose a “history” and assert without a doubt that the Atabeks “were Armenians” and based on this lay claim to the original Georgian lands of Samtskhe-Javkheti.