Georgian Churches in Georgia and in Armenia - Part IV 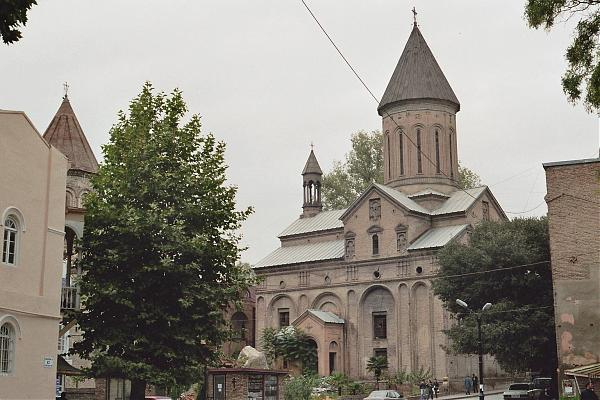 We should begin with the annotation of the reference map: “Currently, the territory of Georgia, including Achara, Abkhazia, and South Ossetia, constitutes 69.7 thousand km2. Georgia is divided into 65 districts (of them, 5 are in Achara, 5 – in Abkhazia, and 4 – in South Ossetia); totally, they occur in 40 districts. There are few districts in Georgia where there is not an Armenian church.

Before I begin discussing pluses and minuses of the reference map, I must note that there are 638 items in the list, that is, there are 638 Armenian churches in Georgia. The annotation says that there are 653. I do not know whether this mismatch is an unintentional error or the author’s desire…
Lower Kartli, that is, Gogareni-Gugareti, which is referred to as Gugark in Armenian, has been an indigenous Georgian land similarly as Javakheti. This is proved not only by Georgian sources. For instance, according to Strabo, “Initially, Armenia was small. It was extended by Artaxia and Zariarde who initially were commanders of Antioch the Great, and, after its defeat, they became kings… They extended Armenia by cutting off lands from neighboring peoples, specifically, Caspiana from Midianites, Pasvnitdi and Basoropeda from Iberians, slopes of Pariadre, Khorezna and Tomarene located beyond Cyrene...“ (XII- II 5).

The passage by Strabo was analyzed by the Georgian scholars D. Bakradze, Iv. Javakhishvili, S. Kakabadze, S. Janashia, etc. In their opinion, this ancient Georgian land was occupied by Armenians after 189 AD.
In Brosset’s opinion, initially Gugark was a Georgian province.
Prof. L. Janashia believes that “in the ancient period, Gogareni, seized by Armenia from Kartli, was the southernmost community of Kartli, located more southward than it has commonly been assumed. Gogarene might have not be beyond the present-day borders of Georgia. More can be said if the “Thasie,” mentioned to by Pliny, refers to Tashir; the, it means that Gogarene is province located south to Tashir.”

Anyway, Lower Kartli (Gugareti) was a Georgian land since ancient times. The fact, that empowered Armenia used to occupy it from time to time, does not imply that it was Armenian, as it is desired by S. Karapetyan and not only him.
As for the etymology of “Gogarene,” N. Adonts assumed its association with the Assyrian Kakkari.

Academician Akaki Shanidze believed that the Georgian “Gogarani” was derived by the Megrelian-Laz suffix –ar, referring to provenance; gog-ar denotes someone from Gogi, and Gogarani denotes Gogreti, the place where they live. That Gugark originates from Gogarani is seen from the fact that there is a village of Gogareni, in Pambaki gorge, in the map (1828) of the Genera Staff of Russia. I can also quote Pliny’s reference according to which regions of Thasie and Thriare were part of Iberia (Regio Thasie et Thriare 4, 29); normally, Thasie is assumed to be Tashiri, and Thriare – Trialeti.
G. Melikishvili provides a substantially argumentated viewpoint. He defines the place-name on the ethnic basis; in his opinion, the designation of Scythians “gog” may be observed within it. Since the later half of the 8th century, Cimmerians and Scythians invaded the South Caucasus from meadows of Russia. They settled in various regions and some of them still retain their names.

For instance, Trialeti has been associated with the name of the Cimmerian tribe Trer, Gogarene – with Gogebi, Saksheni – with Sakebi; this is stated by Strabo.

For a certain period of time, Gogarene was included in Armenia (Ptolemy, Stephanus of Byzantium); however, when “Iberia strengthened in the 1st c. A.D. it managed to regain Gogarene.”

Agathangelos was the first to have referred to Gogarene in Armenian historical literature; he was followed by Pavstos Buzand, Yeghishe, Ghazar Parpetsi. They viewed the province within the border of Armenia. As L. Janashia concludes, “Gugark was incorporated with Kartli either in the 360s or the 380s, while Tashiri has been assumed as one of the districts of Gugark. Therefore, it can naturally be assumed Tashiri went back to Kartli together with Gugark, and later returned to Armenia, if Yegishe and Ghazar Parpetsi’s notes are correct; however, it should also be noted that, if Arshusha of Tashir, mentioned by Koryun, is a viceroy of Kartli, then in the 420s it was included in Tashir, and then Arshusha lost it either in the 430s or the 440s; more exactly, it was Armenians who deprived of Tashir – their vast domain. Naturally enough, Arshusha would have been rather upset with that and did his best to regain his territory.