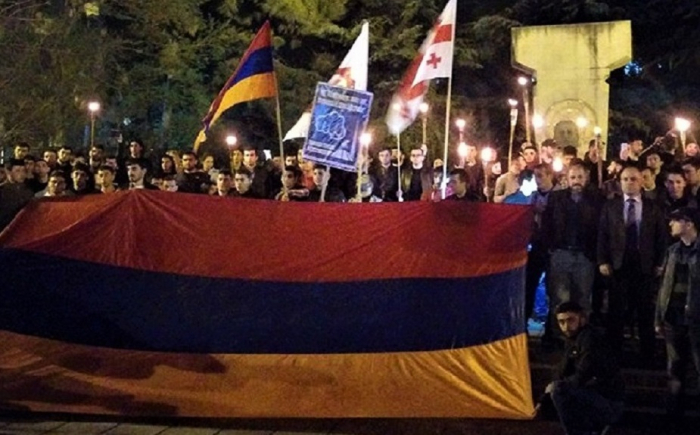 The fundamental difference in the interests of Armenia and Georgia is very clearly seen from the recently published on the website of the Ukrainian Center for Research on the Army of Conversion and Disarmament ("Center for Army, Conversion and Development" (CDAC) of the material of the Armenian expert Benjamin Poghosyan: "Prospects of Armenian-Georgian Relations" (cacds.org.ua).

Dr. Benjamin Poghosyan is Executive Director of the Association of Political Science of Armenia; the founder and chairman of the Center for Political and Economic Strategic Studies and his views largely coincide with the views of the current Armenian leadership.

Poghosyan’s material begins with an analysis of the reasons why Georgia and Armenia have different priorities in foreign policy.

“Armenia, which is under joint Azerbaijani-Turkish pressure because of the Karabakh conflict and with memories of the Armenian Genocide, still fresh, has no alternative but to establish a military-political alliance with Russia. Georgia, with historical claims to the role of Russia in the destruction of Georgian independent statehood and more recent memories of the tragic events of April 1989 in center of Tbilisi, has chosen the path to Euro-Atlantic integration”.

Poghosyan, however, does not specify that Georgia chose Euro-Atlantic integration, largely because Armenia and the Armenian lobby deliberately fomented separatism on Georgian territory. And they made it so that Russia, contrary to its interests, supported separatist projects in the South Caucasus. In addition, it is Armenia that claims to foreign lands, carried out genocide and ethnic cleansing in the controlled territories and turned into a mononational state.

At the same time, Benjamin Poghosyan admits that "Conflicts in Karabakh, South Ossetia and Abkhazia also put Armenia and Georgia in different camps."
And right there Georgia accuses it of this: “Tbilisi rejects the right of the people to self-determination as a legitimate tool for moving towards separation and calls for the restoration of its territorial integrity. Thus, Georgia categorically refuses the opportunity to recognize the independence of Abkhazia and South Ossetia, instead offering a high degree of autonomy within Georgia as the only acceptable solution to the conflicts in this country. Meanwhile, Armenia supports the independence of Nagorno-Karabakh, rejecting any possibility of returning Karabakh to the jurisdiction of Azerbaijan”.

Here is speculation again. And all the more cynical after that the complaints of the Armenian expert sound that Georgia allegedly “rejects” the “people's right to self-determination”. Did the Armenian nationalists ask if over 200 thousand Azerbaijanis living in the Armenian SSR and over 1 million Karabakh Azerbaijanis wanted to "determine" themselves? They were simply expelled from their native land, and tens of thousands from the bottom were brutally killed. It turns out that somewhere around 60 thousand Abkhazians remaining in Abkhazia can "self-identify", and over 300 Georgians of Abkhazia have no right to self-determination? And in Karabakh, on the strength of 100 thousand of the remaining Karabakh Armenians can "self-determine” and more than 1 million Azerbaijanis expelled from their homes — no?

But still, albeit reluctantly, Poghosyan admits that Armenia and Georgia have fundamentally different approaches to the issue of territorial integrity.

The material refers to the mass of claims of Armenian nationalists against Georgia, in particular regarding churches. But at the same time, the expert is absolutely lying trying to present the case as if the Armenians in Georgia were “forcibly” forced to change their names to Georgian.

“Meanwhile, a common history is not only a source of the development of friendly relations. The problems associated with the fate of the Armenian churches in Georgia, as well as with the policy of Georgia regarding the Armenian minority, are issues that are actively discussed in wide layers of the Armenian society. Some perceive the growing decline in the Armenian population in Georgia as a result of some deliberate Georgian policy. Discussions in the Soviet period in Armenia regarding the policy of Soviet Georgia on the forced change of Armenian surnames to Georgian as the only way to achieve career success also sparked conflicting feelings. This issue is not publicly discussed at the interstate level, and many understand that the large-scale immigration of Armenians from Georgia is also the result of a sharp deterioration in socio-economic conditions there”.

Actually, one cannot recall a single case of “forced” change of surname in Georgia. Everything is done exclusively voluntarily.
It is with this “overflow” “from Armenians to crypto-Armenians with Georgian surnames” that the formal decrease in the number of Armenians in Georgia is explained, although their number is actually growing - it’s enough to recall that in Georgian Abkhazia Armenians have already become the majority and the whole economy in this territory is in their hands.

Poghosyan touches on the topic of separatism in Samtskhe-Javakheti and tries to present the case so that he is supposedly not there:

“Meanwhile, some Georgians consider the areas of Samtskhe-Javakheti in Georgia mainly ... to be a potential source of instability. Azerbaijani media and the expert community are actively disseminating information about the separatist movement in Javakheti .... As for Russia, Moscow supports the spread of ideas about the growing Turkish and Azerbaijani influence in Georgia, as well as rumors about the possible deployment of Turkish military bases in the Armenian-populated areas of Georgia if Tbilisi joins NATO. Thus, Moscow wants to create a strong anti-NATO stronghold in the Armenian minority of Georgia”.

To begin with, separatist sentiment among Armenians in Samtskhe-Javakheti is a fact. And it’s not Moscow, and especially not the Azerbaijani media, namely the Armenian nationalists that are to blame. They just wanted to use Russia to support the separatist rebellion in the Karabakh or Abkhaz scenario. And they are provocatively scared by the deployment of Turkish troops in Samtskhe-Javkheti in the event of Georgia joining NATO, again Armenian nationalists.

“However, despite all of the above problems on the surface, the two states have mainly managed to develop friendly relations. Georgia serves as the main corridor for the connection of Armenia with the world. Despite its strategic alliance with Russia, Armenia did not recognize the independence of Abkhazia and South Ossetia, and former President of Armenia Serj Sargsyan even presented an Honorary Medal, the highest award of Armenia for foreign dignitaries, to former Georgian President Mikheil Saakashvili in June 2009, less than a year later after the Georgian-Russian war”.

Here is lie again. Through the occupied Azerbaijani Karabakh, the so-called "NKR", Armenia has long recognized the fake "independence" of Abkhazia and the so-called South Ossetia. Moreover, the annual separatist delegations from there personally received the same Serj Sargsyan.

But the most important, Poghosyan sees as the central theme of his research the “revolutionary” “Maidan” changes in Armenia and the fact that Armenia has become a kind of “model” and “lighthouse” of democracy in the region.

“An interesting aspect of the “Velvet Revolution” is the possibility of a gradual change of roles as a “lighthouse of democracy ” in the post-Soviet space between Armenia and Georgia. Given the recent disputes in Georgia regarding freedom of speech, as well as the politically motivated use of justice (the dismissal of some journalists from the Rustavi-2 television company after the change of ownership, criminal charges against the father of the owner of the TV channel Pirveli, as well as (unlike the former chairman of the board of TBC Bank ) many civil society organizations, including such significant Western players as Transparency International Georgia, argue that there is an obvious tendency to strengthen informal governance and capture and the state, which entails a considerable concentration of power in the hands of the ruling party and influential persons.

In this context, free and fair parliamentary elections held in Armenia in December 2018, and the absence of any high-level public scandals involving key representatives of the new government can strengthen the position of Armenia as a more democratic state in the EU and the international community of civil society”.

Thus, henceforth, the “Lighthouse of Democracy” is Armenia. Georgia, however, is unfoundedly accused of “legitimate Georgian authorities” of “lack of democracy”. And according to the logic of people like Poghosyan, it should be dependent on the “lighthouse”.

Poghosyan and the Armenian nationalists are clearly dissatisfied with Georgia’s cooperation with Turkey and Azerbaijan and are openly angry that they can’t do anything with these:

“Georgia will continue to perceive Azerbaijan and Turkey as much more significant partners than Armenia, and given the very small likelihood of any improvement in relations between Armenia-Azerbaijan or Armenia-Turkey, this will continue to create hidden tensions in Armenian society”.

At the same time, Poghosyan invites Georgia to "dialogue" on Armenian conditions regarding the most significant Armenian claims.

“A reliable way to realistically improve bilateral relations is not to try to ignore the problems deeply rooted in the views of both states, but to begin a genuine dialogue to discuss them. As a first step, a wide range and institutionalized dialogue between experts and civil society should begin (based on the models of the Visegrad dialogue platform, EU-Russia civil society forum and other initiatives). It may begin to cover all problematic issues, such as the policy of the Georgian authorities regarding the Armenian minority and the fate of the Armenian churches in Georgia, as well as Georgia’s claim to own some churches in the Lori province of Armenia”.

It becomes clear that the “lighthouse of democracy” in the person of Armenia intends to issue ultimatums to Georgia both regarding the official claims of Armenians to 465 Georgian churches, and against the “Armenian minority” (that is, the separatists of Samtsze-Javakheti) and many others. And according to the logic of Pogoyasn, as a result of this "dialogue", Georgia should be subordinated to the interests of Armenia as a "lighthouse".