Glorifying the Nazi Nzhdeh Armenia becomes a refuge for neo-Nazis 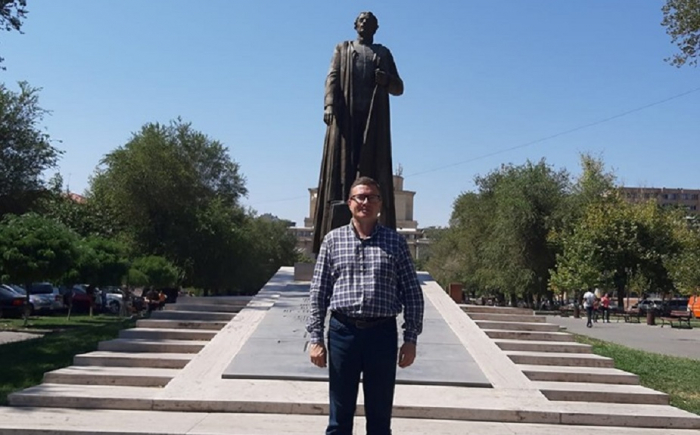 Russian neo-Nazi and extremist Vitaly Shishkin, who incited xenophobia and hatred of ethnic minorities and migrants in Russia, organized the so-called “Russian marches” and headed the Kaluga branch of the “Russians” ethnopolitical association, which received refugee status in Armenia. He announced this on his Facebook page.

“I am grateful to Armenia for granting refugee status as a politician who is persecuted in Russia for political reasons,” Shishkin wrote.

Also on Facebook Shishkin he published his photo on a background of idol Armenian nationalists - Nazi war criminal Garegin Nzhdeh (facebook.com). With a very eloquent comment:

“Probably, the great Armenian genius, whose monument is behind me, is not at all familiar to the residents of Armenia.

I hope that in 3-5 days I will finish a small book about him and many in Russian will be able to get acquainted with his outstanding life and struggle, with philosophy and heroic death. ”

Shishkin apparently really likes the glorification of Nazism and the Nazis in Armenia. And, most likely, he is not the last extremist whom the Pashinyan regime “hospitably shelters”.

Indeed, among some of the marginalized and forgotten Russians, thanks to the Armenian lobby, which spreads wild Islamophobia and heroes Nazi criminals, neo-Nazi ideas are spreading more and more.

It is clear what it is pulling neo-Nazis to Armenia. Similar reaches for similar. In fact, the Nazi regime in Yerevan, glorifying the Nazi executioners Garegin Nzhdeh, Drastamat Kanayan and others like them, is completely “own” for neo-Nazi extremists and marginals from different countries, including Russia, the country that defeated Nazism and paid a terrible price for this victory - millions of lives of their sons and daughters.

Meanwhile, it is neo-Nazi thugs who can become the “backbone” of the “Maidan” inspired from outside in Russia, which can completely destroy Russian statehood. And the fact that such extremists gather in Yerevan “under the wing” of the Armenian special services and “pilgrimage” to the monument to Garegin Nzhdeh is fatally dangerous in the end for Russia itself.