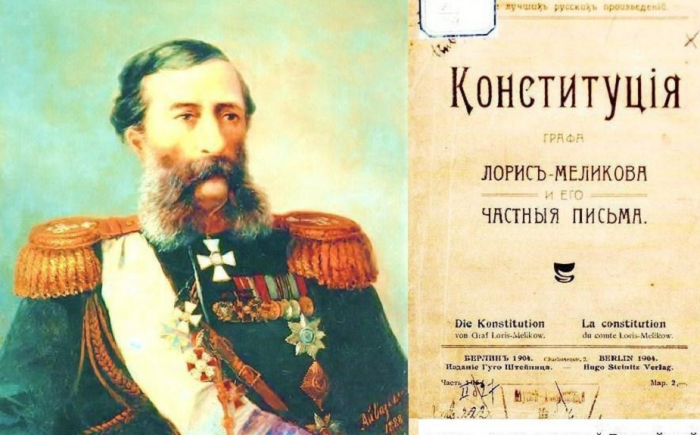 In the light of the dominance of the Armenian lobby in the highest echelons of power in Russia and despite the fact that the Russian Foreign Minister, Armenian nationalist Sergei Lavrov-Kalantarov today means almost more than President Vladimir Putin in Russian politics, it’s worth remembering once in history “the authority entrusted to the Armenian "In 1880-1881 almost led to a disaster for Russian statehood and the death of Russia.

Then only a miracle saved Russia, or rather Ober-Prosecutor of the Holy Synod Konstantin Pobedonostsev (hated by the Armenian tycoons, as he defended the interests of Orthodoxy and limited the appetites of the Armenian church).

Fortunately, he managed to discern Pobedonostsev as essentially becoming the Russian dictator and destroying Emperor Alexander II, the Armenian Mikhail Loris-Melikov, Russia's worst enemy and stood in the way of his “reforms”, which were murderous for the country.

Mikhail Loris-Melikov himself gained immense influence on Emperor Alexander II, and very cunningly: on the one hand, in fact, encouraging revolutionaries and terrorism, and on the other hand, inserting himself as the “main fighter” with terrorism. Although the first high-profile attack against Alexander the second in 1866 (fortunately, then failed) was also committed by a terrorist, an Armenian by origin, Dmitry Karakozov.

After the attempt on the life of Alexander II, organized by Stepan Khalturin in the Winter Palace on February 5, 1880 (also unsuccessful), Loris-Melikov convinced the emperor that the previous measures to combat terror were “unreliable” and asked to be given extraordinary powers allegedly “to fight terror "(Which, in principle, he himself contributed in many ways).

Here we see the "corporate identity" of the Armenian lobby - to create problems ourselves, then to "lead" their solution as "indispensable." Now Lavrov Kalantarov, with his adventures in redrawing the borders, has led Russia into international isolation and is “successfully fighting it.”

On February 12, 1980, the actual reign of the Armenian in the Russian Empire began. A decree was issued on the creation of the Supreme Administrative Commission, headed by Loris-Melikov. The main task of the commission was "the protection of public order and public peace." The chief commander of the commission was granted exclusive rights; all state bodies, including the military department, were subordinate to him.

In fact, Loris-Melikov was endowed with dictatorial powers.
On August 6, 1880, Loris-Melikov became Minister of the Interior and destroyed the famous "Third Division" (secret police established by Nicholas I), which fought the revolution and terrorism. In fact, terrorists, including those who did not conceal their intentions to kill the emperor, were given carte blanche and the question of the murder of Alexander the Second became only a matter of time.

The last months of his life, Alexander II was essentially completely in the hands of Loris-Melikov, “pushing through” his liberal-revolutionary draft constitutional reform, clearly written under the dictation of foreign ill-wishers of Russia (with whom the Armenian leadership was associated).

This reform, in fact, destroyed Russia. It made the tsar’s power nominal, untied the hands of various “revolutionaries” for destructive activities, and at the same time gave tremendous opportunities for the capital connected with foreign powers (including Armenian) to control Russia. If this constitution were adopted as Loris-Melikov wanted it, then the Russian Empire would perish and be "divided into shreds" back in the 80s of the 19th century.

On February 17, 1881, Alexander II approved the report of Loris-Melikov on the preparation of political reforms called the “Loris-Melikov Constitution”. Initially, it was supposed to create a Preparatory Commission for the development of reforms to which, in fact, the power in the country should also pass.

Loris Melikov was in a hurry to try to quickly carry out the "reform" murderous for Russia. By early March 1881, a government report had already been prepared on the convening of the Preparatory Commission.

On the morning of March 1, 1881, Alexander II approved the text of the official announcement of the convening of the commission, and a hearing of this issue was scheduled for March 4 in the Council of Ministers. On the same day, terrorists (those who, in fact, were patronized by Loris-Melikov) killed Alexander II. Apparently, the cunning Armenian decided that “the work is done”, the process of destruction of Russia took on an irreversible character and the emperor can be “removed” as having played his role.

Unfortunately, there are still illusions among Russian patriots that Loris-Melikov, who carried out the assignment of the Armenian plutocracy, foreign masons and Western powers, "wanted the good of Russia."

Here, for example, excerpts from the discussion on Facebook of the identity of Loris-Melikov, who was raised as one of the users who positioned themselves as a “Russian patriot” - by user Sergey Lomov. Lomov is trying to “exalt” Loris Melikova in response to the reasoned allegations that Loris-Melikov was on the side of the revolution and was very harmful to Russia.

“He has done a lot for the Empire. His name was a magnificent Armenian. ”- Sergey Lomov reports. To which they reasonably answer, That Loris Melikov was about to blow up Russia by introducing a constitutional monarchy. Thank God, Pobedonostsev prevented this by postponing the revolution for a long time.

Immediately after the assassination of Alexander II on March 1, 1881, Pobedonostsev insistently demands the removal of Count Loris-Melikov from the new emperor. Here is what he wrote to the sovereign on March 6, 1881:

“The hour is terrible and time does not endure. Or now save Russia and yourself or never. If you will sing the old siren songs to you that you need to calm down, you need to continue in a liberal direction, you must give way to the so-called public opinion - oh, for God's sake, do not believe, Your Majesty, do not listen. It will be the death, the death of Russia and yours: it is clear to me as a day. Your safety will not be protected by this, but will even decrease. The mad villains who have destroyed your parent will not be satisfied with any concession and will only become furious. They can be appeased, evil seed can only be torn out by fighting them on the stomach and death, with iron and blood. At least die in the struggle, if only to win. It is not difficult to win: until now everyone wanted to avoid the struggle and deceived the late Sovereign, you, yourself, everyone and everything, because they were not people of reason, strength and heart, but flabby eunuchs and magicians...

Forgive me my truth. Do not leave Count Loris-Melikov. I do not believe him. He is a magician and can still play a double game. If you surrender yourself to him, he will lead you and Russia to perdition. He only knew how to carry out liberal projects and led the game of internal intrigue. But in the state sense, he himself does not know what he wants - that I myself have repeatedly expressed to him. And he is not a Russian patriot. Take care, for God's sake, Your Majesty, that he does not take possession of your will, and do not waste time...

A new policy must be declared immediately and decisively. It is necessary to end at once, now all the talk about freedom of the press, about the willfulness of gatherings, about a representative assembly. All this is a lie of empty and flabby people, and it must be discarded for the sake of the truth of the people and for the good of the people ... ”

On March 8, 1881, during a discussion of the so-called “Loris-Melikov constitution” in the Committee of Ministers in the presence of Emperor Alexander III, Pobedonostsev made his famous speech:

“Chief Prosecutor of the Holy Synod K.P. Pobedonostsev (pale as a canvas, and obviously excited): Your Majesty, owing the oath and conscience, I am obliged to express to you everything that is in my heart. I am not only in embarrassment, but also in despair. As they used to say: “Finis Poloniae” before the demise of Poland, now almost have to say: “Finis Russiae”. When considering the project, proposed for your approval, the heart is compressed. In this project, falsehood is heard, I will say more: he breathes falsehood...

We are told, ”continued the Chief Prosecutor of the Holy Synod,“ that in order to better draft legislative projects, we need to invite people who know people's life, we need to listen to experts. ” Against this, I would not say anything if I wanted to do just that. Experts were called in the old days, but not in the way that is now proposed. No, in Russia they want to introduce a constitution, and if not immediately, then at least take the first step towards it ... And what is a constitution? The answer to this question is given to us by Western Europe. The constitutions that exist there are an instrument of all unrighteousness, an instrument of all intrigue ... We are told that we need to cope with the opinion of the country through its representatives. But will those people who come here to consider legislative projects be real spokesmen for the popular opinion? I'm sure not. They will only express their personal opinions and views ...

And this falsehood, according to a foreign model, is unsuitable for us, they want, to our misfortune, to our destruction, to introduce with us. Russia was strong thanks to the autocracy, thanks to unlimited mutual trust and close ties between the people and their tsar. Such a connection between the Russian Tsar and the people is an invaluable good. Our people are the guardian of all our valor and our good qualities; you can learn a lot from him. The so-called representatives of the zemstvos only divide the king with the people. Meanwhile, the government should be happy about the people, it should know their real needs, should help them cope with desperate needs often. This is the destiny to which one must strive to achieve, this is the true task of the new reign.

Instead, they offer to arrange for us a talking room, like the French etats generaux.

And although most of the Committee of Ministers spoke in favor of the “Loris-Melikov Constitution,” the liberal faction in the government suffered a severe moral defeat on March 8. And the Highest Manifesto of April 29, 1881 finished it about the "inviolability of autocracy", written by Pobedonostsev and approved by Alexander III. These words caused a real shock to Loris-Melikov and his supporters in the government, they did not assume that in Russia after 20 years of liberal reforms that would seem to have irreversible further disastrous “Europeanization” of the country, they can officially sound from the Highest Name similar "archaic" words. Under Alexander II, this was long ago unaccustomed to.

In early May, the main liberal dignitaries - Minister of the Interior Loris Melikov, Minister of Finance A. A. Abaza and Minister of War D. A. Milyutin - resigned.

The reign of Alexander III began, and with it the era of K.P. Pobedonostsev.

The significance of the victory over Loris-Melikov was also recognized by Pobedonostsev himself, who considered this to be perhaps the main success in his work for the good of Russia. Two years later, Pobedonostsev wrote to the emperor: "Blood is frozen in the veins of a Russian man at the very thought of what would have happened from the implementation of the project of Count Loris-Melikov and his friends."

Alas, today Russia does not have its Pobedonostsev. And therefore, unfortunately, “under the supervision” of the traitors and the fifth column of their number of Armenian nationalists who are closely “patronizing” the highest echelons of power in Russia, the country is heading for disaster.