Georgian Churches in Georgia and in Armenia - Part III 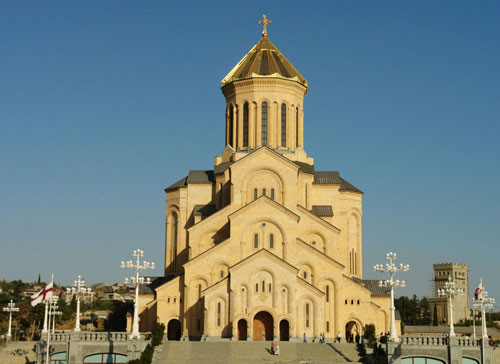 It is impossible not to note negative attitudes, moreover, hatred on the part of some Armenian scholars in their papers aimed at humiliating of the Georgian nation.

For instance, Suren Ayvazyan argues that the Russian word грузин (“Georgian”) originates from another Russian word грузчик (“loader”), that the poem “Suliko” was written by an Armenian poet and was then translated into Georgian by Akaki Tsereteli (Bagratun), and Georgians declared that it was an original Georgian composition…

Such “witticisms” can be further quoted but the aforementioned is rather sufficient to demonstrate the unconscionable attitude of some Armenian scholars to the Georgian people.

For some time, I thought that Armenians had territorial claims against Georgians; it appeared that I was mistaken. Let’s listen to the scholar I. Pompeev: “I was very much concerned with what Tigran told me: History behaved to Armenia unjustly; and he added: “Now we have a chance to regain our historical lands – Karabakh and Nakhichevan (both of them are territories of Azerbaijan—B. A.), Akhaltsikhe and Akhalkalaki. Then he looked at me and said: We will begin to regain the lands of Rostov, Kransodar, and Stavropol.” How come? I was surprised: Were they parts of the Kingdom of Armenia?
What do you think? Tigran replied seriously: Under Tigran II the Great, these lands belonged to Armenian meliks.”

Nobody should doubt these statements. All Armenians think similarly to Tigran despite which social class they belong to.

It is not new that they claim Georgian wine, meals, songs, dances, history, territories; however, I did not expect that they would claim Kurdish songs and dances: “Time passed; Armenians learnt our dances and songs, customs and cuisine. They like them so much that they no longer want to return them: Shame on them! But they will have to return them,” writes the indignant Kurdish author Aza Avdali.

However, we should better take a look at Georgia … Some Armenian scholars seem to be unhappy with the history of the Georgian nation, centuries-long culture, and existence, at large. I will speak about it some time… Presently, my aim is to discuss Armenian scholars and clerics’ groundless claims concerning Georgian churches.

Before discussing the aforementioned problem, I’d like to say a couple of words about the history of settlement of Armenians in Georgia: whenever Oriental aggressors invaded Armenia, Armenian refugees primarily found shelter in Georgia. Thus, for centuries various waves of Armenian refugees used to come to Georgia, and, owing to Georgians’ hospitality, arranged their lives quite well on the Georgian land. Up to now, it has not been established when the group entered; however, neither it is correct what some Armenian scholars write: as though Tbilisi was Armenians’ suburban fortress which later became Georgians’ capital. By ascertaining this, they want to establish the idea that Armenians lived in Tbilisi in early centuries and, hence, they were its initial settlers. This tale is not worth of talking about as far as it is a lie and a fabrication. There is neither a document nor a source to prove it.

The process of Armenians influx became widespread and active in the 11th c., and then in the 15th c., when nomadic invaders occupied almost all living areas in Armenia.

It should also be noted that, according to Vakhushti Bagrationi’s Geography, Armenians mostly lived in the vicinity of Ktsia-Bedruji, in Tashiri, Chikhori, Sachkhere, and Kutaisi; if we consider the resettlement by tsarist Russia of 20 000 ethnic Armenian families from Erzurum to Samtskhe-Javakheti and Tsalka, then the picture will be complete.

On April 13, 1891, Issue 81 of the newspaper Iveria published the article “With a small comment,” signed by G.P. The Georgian author argues with the Armenian historian Al. Eritsyan (1841-1902) who had published the article “Catholicism in Georgia” in the newspaper Novoe Obozrenie (1891 or 2502).
Al. Eritsyan writes: In Guria, specifically, in Ozurgeti, there was an Armenian settlement in the past.

The Georgian author seems to be rather proficient in history. He writes: “There are neither Jews nor Armenians in Guria. Generally, Gurians do not like Armenians. There are provinces in Georgia where people do not even know what the word “Armenian” means. Let’s ask a question: Where did the Armenians go who, in the opinion of Mr. Eritsov, settled in Ozurgeti in the past? If they were there, why there is no trace of them? Georgian kings and princes did not force Armenians and did not affect their religion. Could Gurians have so much influence and impact on Armenians as to have assimilated them and made them change their religion as well? I do not think so. There should be a different reason. There are two versions: either Mr. Ertsov has been mistaken about the Armenian settlement in Ozurgeti or Armenians have settled in Guria in the past, and Gurian did not tolerate their neighborhood and have got rid of them anyway. If Mr. Ertsov explains this circumstance, we will be much obliged. We will also be rather obliged if he explains the origin of the names “Guria” and “Ozurgeti.”

As far as I am concerned, Al. Eritsyan has not replied to this comment and has not argumented when Armenians settled in Ozurgeti or whether it ever happened or not in this region of Georgia. Without any documentation, he utterly extended the geography of Armenian settlements in Georgia and, thus, disclosed his secret thoughts: “From one sea to another, there was Greater Armenia, and all provinces of Georgia are its historical parts.” Ek. Takaishvili’s words prove that his thoughts were of that kind. Takaishvili says that when he made a talk about Samshvilde, he presented photos of the cathedral, inscriptions, etc. Al. Eritsyan said that he had been in Samshvilde but, except small churches and belfries, failed to see any cathedral… I told him: “He wrote about Samshvilde and however did not notice an elephant.” What he said was impudent! Then, Geller told me that, when D. Bakradze made presentations, Eritsyan always opposed him saying that everything was Armenians, and he keeps doing it”!...

Al. Eritsyan, famous with his biased and, I would say, aggressively predispositions to Georgian history, published a work that in 1837 there were 198 Armenian churches in Georgia. Accurateness of the number (198) was doubted immediately.

The doubts seem to be substantial with a view to Al. Eritsyan’s negative attitude to Georgian cult monuments. He dreamt of monuments of Armenian material culture in every corner of Georgia. Thus, he would not be ashamed of artificially increasing the number of Armenian churches in Georgia.

“A worthy” successor of Al. Eritsyan appeared in the 20th c. In 1995, the historian Samvel Karapetyan published in Yerevan the reference map Armenian Churches in Georgia (in Armenian). It was immediately translated into English and Russian and distributed all over the world. I reacted by publishing the book “Armenian” or Georgian Churches in Georgia?! (1996) in Georgian, English, and Russian. Based on archival documents, I proved that at least 80% of the 653 allegedly “Armenian” churches are Georgian and that they were presented as Armenian.